You don't want any of them in your foxhole.

Last week, we were in an informal chat with a friend — a good man — and the question arose of how so much garbage is present in the Church.

He said it has taken him a while to break out of what he called "the false optimism" of Pope John Paull II's and Benedict XVI's papacies. A lot — and we mean a lot — of evil was left unchecked and even advanced during the 35 years of those two pontificates.

John Paul and Benedict both had more, shall we say, "rosy views" of the Church than the behind-the-scenes reality would otherwise call for. Many of the more sordid characters who have emerged in the hierarchy recently were finding their footing during those years.

If there is a lesson to be learned from those nearly four decades it would be that future popes should be much more suspicious — and accepting of the reality of fallen human nature — and correspond their management styles accordingly.

Men who are crooks or cronies or cowards — it matters little to the wicked bishop because he has a use for each.

When it comes to souls and their salvation, there is never a moment a leader gets to be not vigilant. It doesn't matter if he has a personality that tends to make him more personable, or willing to look the other way, or disliking of confrontation. Those are traits that the Vicar of Christ does not get to rely on. Satan is always working and, frankly, he had a field day during those years, sowing the seeds of corruption whose rotten fruit we see all around us now.

How did it all unfold and get positioned to create such a weak, pathetic hierarchy here in America?

Well, there are at least a few very wicked men who were bishops back in the day, as well as in our day — the "heirs of wickedness" might be a helpful way of viewing them. They have no supernatural faith and their father is the Devil, and that is clear from their actions. They don't believe and they are bent on destroying belief.

These men whose intent is deliberate and malevolent then set about co-opting weak, or ambitious or gay or whatever-type men they know they can control and manipulate. It's probably the case that this "next layer down" group of men are of the "useful idiot" crowd, but they remain nonetheless "useful."

These types are easily taken in with a smile and schmoozing and charm, precisely because they are naïve, and their naïveté is coupled with a weak personality — an extremely dangerous combination because of how easily they can be controlled without even realizing it.

They get brought into the establishment — the system — by wicked prelates who size them up and conclude, usually correctly, that they will be good functionaries who will do what they are told, never question anything, or for that matter, ever even have a question occur to them. The ones who are more career-minded can always be tempted and consequently steered with that carrot.

The gay ones can be blackmailed or provided the comfort and availability of frequent sex — all under cover, of course, so they will always be loyal to their sugar-daddy prelate. They get to be gay and he has a controlled operative in place. Weak-minded laymen whose first concern is themselves are brought in precisely because they have an aversion to confrontation. They're soft. They won't make a peep because they don't want to lose their job and they don't have the stomach for it.

These emasculated types who try and pass off their weakness as "being charitable" are extremely useful to a wicked or weak prelate because they will go along with practically anything. They are dull-minded, deprived of the gift of insight, and therefore perfect to promote up the ladder in the chancery, or Catholic association of this or that — again, the bad bishop has his "man" in place.

Because they are confrontation-averse they are always inclined, and generally do, look the other way — make up some excuse — where they generally hide behind "charity," or are simply naïve.

As long as he is a good functionary and can keep the mundane tasks in order, he's pretty much set for life and will nestle into his role as "professional Catholic" — a squishy, spineless mid-level bureaucrat type, whose grey suit matches the color of his soul. This type is happy to hear from the bishop that he is "serving the Church" and easily believes it because the building he works in has a cross on it or a painting or two of a saint scattered about. He will never challenge the corruption, if he ever comes to understand that there is corruption, because he simply "does not have it in him."

"I wouldn't want to be in the same foxhole with him."

From that pool, there usually does emerge a handful who are more ambitious who — when the pot gets sweetened with pay raises, more authority, rubbing elbows with the brass, cocktail party invitations and all that — the deal is sealed.

These types of professional Catholics — sometimes clergy, sometimes laymen — usually run the one department or another, like communications, or marketing, etc., precisely because they have been promoted to see themselves as "leadership" so now, it's all personal.

Wicked bishops, you see, find people's vulnerable areas, the weak spots in their personalities, those dark little corners that can be exploited for ill. They have learned this craft from their father, the Devil. A good bishop sees those vulnerabilities, those weaknesses, and tries to help the man eradicate them, not try and exploit them for his own evil ends.

Those are Judas bishops and they need accomplices, even if those accomplices are fools, or weak, or naïve or dull-witted. As long as they are easily controlled, that's really all a wicked bishop needs — a weak man whose ability to think through something is muddled.

And if you go further up the line — this same paradigm is the case in the hierarchy as well — there are many men wearing miters who are little else than the mid-level, pudgy, grey, bureaucrat-type — useful for some archbishops or cardinals who bring them along the hierarchical career path for their own ends. Men who are crooks or cronies or cowards — it matters little to the wicked bishop because he has a use for each.

Perhaps the worst thing one man could ever say about another is "I wouldn't want to be in the same foxhole with him."

Think for a moment and seriously ask yourself, especially the men listening to this: Which of the bishops would you want in your foxhole? And that, ladies and gentlemen, is the answer to what is so terribly wrong in the Church today. 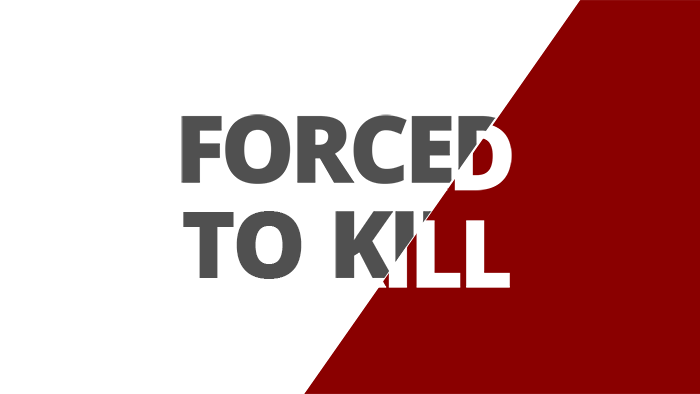 Forced to Kill
Or lose everything.