Nothing they say can be believed. Nothing.

We must say that the more and more Bp. Robert Barron opens his episcopal mouth, the more he sticks his foot in it. In fact, given the latest little video he released, his foot is so far in his mouth, his toes must be in his upper gastrointestinal tract by now.

A couple of weeks ago, we showed the hypocrisy of Los Angeles archbishop José Gómez issuing his letter — after the carnage of the election — saying Biden might be a danger to some Catholic teachings. Wow. What stupendous insight. We are so blessed to have such incredible leaders to tell us what we could have never figured out on our own.

Well, not to be outdone by his archbishop, Barron had to get in on the "abortion is bad" two-faced presentation as well. Unlike Gómez, however, Barron has something of a hole to dig himself out of. The last few months have not been kind to the modernist bishop.

Remember the Ben Shapiro fiasco, when Barron whiffed on the necessity of Christ for salvation? According to Barron, Jesus isn't necessary, he's only the privileged way to salvation, implying to the average theologically untrained listener that there must be other ways to be saved.

In another instance, while basking in the glow of his own reasonableness and intellect, he told Dave Rubin on his show that he doesn't think the Church or faithful should be fighting against gay marriage. Kind of strange that one because the Vatican itself has stated numerous times that yes, they should.

We are so blessed to have such incredible leaders to tell us what we could have never figured out on our own.

But hey, it's celebrity Bp. Barron, so what the heck, right? Then he scolded faithful Catholics for saying the bishops should be getting out physically and helping to protect the statues of saints being toppled by BLM and Antifa. He got quite the backlash for his insult to the faithful, saying that it's the laity's job, not the bishops'.

In fact, it was so intense that he had to release another video from the heights of his ivory tower of self-importance saying the vitriol needs to end, totally ignoring that he was the source of it with his politely worded, condescending insult. A few days later, with, of course, a self-promoting video crew in tow, he did go out and make a 10-minute appearance with the peasants to show his effort at protecting the statue.

What he didn't tell you — and that Church Militant later learned — is that one of his biggest donors essentially ordered him to backtrack and show his face or the money would dry up. So, of course, out he trotted — again with a camera crew highlighting his deigning to mix with the Catholic peasantry. But only briefly, you know. Very, very busy these auxiliary celebrity bishops. Lots to do. Many people to meet. Oh very busy.

But he was not too busy, apparently, to endorse pro-gay Fr. Jimmy Martin and his building-a-bridge garbage between Church teaching and mortal sin. So bearing all that background in mind, the evolving track record that puts things in context, consider his latest look-at-me stunt.

It's a short video explaining that the Democrats who control the U.S. Senate failed to allow protections to be extended to babies who survive abortion. The legislation is the "Born Alive Protection Act," and the communist Democrats have no desire to give one inch on abortion or, for that fact, what amounts to infanticide, because the baby is alive and outside the womb on a table before the doctors kill it.

Barron expresses his horror at such a stand by Democrats. "How could they?" he ponders. He just is left speechless he says, not knowing where to go with that. No way to process that. Wow.

The shock! The surprise! How could they — and after all that talk about uniting the country! After all their promises to reach across the aisle? Barron is appalled, clutching at his pectoral pearls. And then, in what has got to be one of the most two-faced, hypocritical comments ever captured on tape by a successor of the Apostles, he finishes up with this short flurry: "The Church must raise her voice in protest."

Oh please. Is there a polite way to tell a bishop to get lost and stop trying to act like he cares when he really doesn't — or at least not enough? No, Barron doesn't support abortion. But he hasn't lifted a finger in oppositon to the archtiecture that supports abortion. How dare this phony come out now and try to pretend that, in his opinion, the Church must raise her voice in protest.

Seriously? Where were you, Bishop, before Nov. 3? Where were you when the election was being stolen by commies who proudly declared their allegiance to child murder? But, a little closer to home, why haven't you and your "brother bishops" raised your voices in protest against all the Catholic politicians you have let slide for decades who vote this evil in place — who keep the machinery of this child holocaust well-oiled.

You let them commit sacrilege hand over fist in receiving Holy Communion. You all let them sow scandal among the faithful. You let them pretend to be some alternatively acceptable form of Catholic, sort of like your "Jesus is the 'privileged way'" idiocy.

You and your other crocodile-tears-for-the-babies-in-the-womb comrades have never lifted a finger in any substantive way to fight for these innocents. You're too busy sucking at the teats of career advancement and wanting to be liked by all. So in Barron's case, you make a video and send it to your adoring masses, looking all serious and tough but totally lacking any real spiritual testosterone.

Barron, like Gómez (and virtually all the rest of them), would never want to run afoul of the globalist Vatican and its "social justice" talking points. The reason they don't is that they know their careers would come to a grinding halt. That, ladies and gentlemen, is cowardice.

Barron is using his "look at me get tough" video as a way to repair his image. Now that he knows Biden is in power with the rest of the child-killing crowd, he can say whatever he wants. It'll fetch him some more eyeballs and get some people to think favorably of him again, perhaps, maybe.

But, in either case, when the chips were down and saying something could have actually mattered, he abandoned those children in the womb when they most needed him. Where was his motion on the floor of the USCCB meetings to denounce and declare "excommunicated" all these phony-Catholic child-killers?

Don't believe anything that comes out of this man's mouth. Like his fellow partners in spiritual terrorism, they don't say a word that isn't calculated to their own benefit first. They're double-dealing, lacking-in-supernatural-grace, phony, wimpy, charlatan hirelings. Period. Gómez is trying to bilk the faithful out of half a billion dollars in Los Angeles to "build up the Church."  Barron has a little media empire to support, and none of that can be threatened, don't you know?

Barron is a danger to the lived experience of the Faith in this country and in the Church at large.

Barron is a danger to the lived experience of the Faith in this country and in the Church at large. He built a reputation on being some kind of intellect, but when the time comes for him to actually put his gifts at the service of the truth, when he knows it will cost him, he hikes up the bloomers and takes a seat. Then, when the coast is clear and no one is listening or cares anymore, then he says the Church must raise her voice in protest.

Barron, that train pulled out of the station a few months ago. But you already know that, don't you? Hopefully, your phony little video will get you some more donors, but don't expect Catholic faithful (who are wisening up to you) to be fooled every time.

If you really cared, you would have done what needed to be done months — actually years — ago. So here's a question everyone should ask the esteemed bishop: "If you were offering Mass and the Catholic governor of your state (California), Gavin Newsom, presented himself to you for Holy Communion, would you deliver Our Lord over to him, yes or no?"

I'm pretty sure we all know the answer. Wilton Gregory is cool with Child-Killer-in-Chief Biden receiving Our Lord sacramentally into his depraved soul; so is Cupich; so is McElroy.

So, as you're rounding up the bishops to "raise the Church's voice in protest," let's start there, shall we? You're a coward. And so are your brother bishops. Yeah, the Democrats are evil. But you helped put them in place. Good luck with that one when you stand before Our Lord. Oh yeah, I forgot: Everyone goes to Heaven, so who cares? 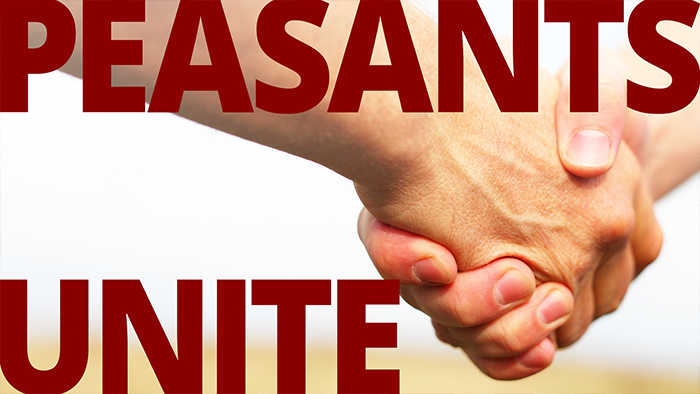 Peasants Unite
Around the truth of Christ.