It's crunch time for Franciscan University at Steubenville (FUS). Huge donors are ticked off, as are parents and alumni, that homoheretic Cdl. Blase Cupich is going to be speaking at the college which dubs itself as being "passionately Catholic."

It is a well-known fact that when it comes to Catholicism, the only thing Cupich is passionate about is fomenting revolution against the Church.

He has not turned over to the Illinois attorney general the names of all accused clergy, notably Cardinal Joseph Bernardin, a story which Church Militant broke two weeks ago when the secret files were given to us by a whistleblower.

Cupich was denounced by Abp. Viganò as being part of the homosexual cabal running the Church into the ground — and owing his episcopal advancement to homopredator Theodore McCarrick.

Cupich has ordered his clergy at every diocese he's been bishop to not attend pro-life prayer rallies or events at abortion killing centers.

At the Vatican sex summit last February, he went out of his way to prevent the topic of homosexuality within the clergy even being brought up as a discussion point.

He has turned a blind eye to active homosexual priests in his own archdiocese.

He continues to allow dissident priests like Fr. Michael Pfleger to preach heresy and dissent.

He lied about the context of an interview by local Chicago NBC station and even had a letter read from the pulpits attacking the station — the famous "rabbit hole" controversy.

The list with this man never ends. He's only been archbishop of Chicago for not quite five years and has already racked up an impressive list of anti-Catholic moves and comments.

He worked with the lying, cheating Donald Wuerl behind the scenes with Pope Francis to derail any real efforts at substantive reform of predatory clergy in the United States by pushing for and getting the "bishops will investigate themselves" proposal made official.

For all the above reasons, and then some, Cupich was voted the least liked bishop in the United States.

And now, for this disgrace of a cleric, Franciscan is throwing open wide its doors.

But officials at Franciscan are putting distance between themselves and the errant cardinal, saying that the school itself didn't actually invite Cupich, that he came along with the package of speakers who were part of a larger group that had been involved with last October's Vatican Youth Synod.

Well, OK, fair enough. Cupich got brought in, like gum on a shoe, and the school didn't know that.

Well, now they do. The school now has two options: insure Cupich does not set foot on the campus in any official capacity or allow him to speak and suffer the consequences from all the bad press and severe drop in donations — as well as applicants for future students.

Cupich is the very model of everything wrong in the hierarchy, and no one who has supported FUS in its mission to produce students who are "passionately Catholic" can agree with his official presence, however it came about.

Administrators have a number of options when it comes to making sure he doesn't appear:

The time has come for Franciscan, as it is coming more frequently for all sorts of Catholics — decision time.

Which side are you on? The revolutionaries, the homosexual cabal which has operational control of the Church? Or tradition, the Magisterium and the glory of Catholic truth.

Franciscan has not sought out this war — true. Privately, some in the administration are expressing grief over the situation and do not want him on campus.

But this war is not private. Sides must be chosen, publicly. As the expression goes, you may not be interested in war — ah, but war is in interested in you.

The war for the soul of the Church has come to Franciscan; all that remains to be seen at this point is which side the school will choose.

At least one major donor Church Militant is aware of has contacted the school, enraged at the news of Cupich being given a speaking platform, and demanded his hundreds of thousands in donations be returned immediately.

He is even threatening a lawsuit to get his money back. Whatever merit such a suit would have or not have is beside the point, however.

It would demonstrate the depth of the crisis and create a public inflection point for school and the Church at large.

Old gay cardinals and archbishops, the revolutionaries of the 1970s have surged back under Francis, and this time, they have moved from parishes into the very nerve center of the Church and seized control.

Nothing less than that is going on and faithful Catholics are mad as hell about the non-stop encroachment on the Faith and the destruction of the Church and their families that has come about as a result.

What happens now with the Franciscan/Cupich affair may very well turn into the "shot heard round the Church," whichever route Franciscan chooses.

Cupich's official presence on campus will bring about the destruction of Franciscan's identity.

The school disinviting him publicly, for the truthful reasons, will be a stake in the ground that faithful Catholics will be able to rally around.

Each choice will have its consequences, both in the near term and the future.

Franciscan, the moment has arrived. It's decision time: tradition or revolution? 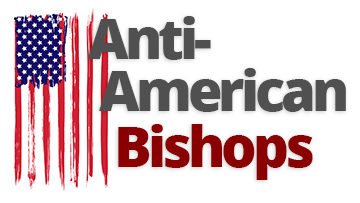 Anti-American Bishops
A greedy, self-serving bunch if there ever was one.