The arrogance is simply off the charts.

Well, for about the 346th time as bishop of Buffalo, Richard Malone once again trotted out to the microphones this past Wednesday and found himself in a most, shall we say, uncomfortable position before the local media.

He was being his usual lying or deceptive self with area Catholics about one of his priests, Fr. Jeffrey Nowak, who had been sexually harassing a seminarian the priest had developed a crush on.

So in a high-level meeting of his inner circle, Malone let loose about the priest, rolling off a string of extremely unflattering names.

Note the language Malone uses about the homopredator priest; he calls him a perpetrator, a sick puppy, a man with serious serious issues, and yet during his press conference, he passed his comments off as no big deal, just a kind of relaxed chatter among friends, again trying to evade responsibility for having left the priest in place for months.

What Malone did not know at the time of that meeting was that his very own priest secretary, Fr. Ryszard Biernat, was secretly audio recording the meeting.

The seminarian who Nowak had made sexual advances on, Matthew Bojanowski, had gone to Fr. Biernat and told him all about it months earlier.

Father Biernat, perhaps one of the very first clergy whistleblowers to go public, went to WKBW, the local ABC News affiliate, with his recordings and met with TV reporter Charlie Specht.

Specht has done outstanding work covering and uncovering the deceptions of the Malone legacy, including blatant lies about predator priests, misreporting numbers of abusive clergy and approving sham investigations into his clergy and reports of abuse.

That last charge is what Church Militant chased him down about in the Detroit airport last November, wanting to know why he'd signed off on an investigation without questioning the virtual eyewitnesses to the abuse of 6-year-old boy by Fr. Dennis Riter, who Malone reinstated as a Buffalo pastor.

His tragic record of lack of transparency has caused to him go before local media numerous times, and every time, he gives sideways answers and deceptive responses. Wednesday was no different.

He began the hastily called emergency press conference as though the most pressing issue was that he had been secretly recorded by his own priest secretary. Talk about tone-deaf or, more to the point, deceiving.

When he was done with his prepared comments, the reporters immediately pounced on the real issue, asking him a hundred different ways, why isn't he resigning?

Malone answered as though the thought had never entered his mind, although in the secret audio tapes, it seemed to be the most pressing issue for the self-absorbed prelate.

Interestingly, Malone and his hitwoman, Kathy Spangler, the diocesan spin controller, actually forbade reporter Charlie Specht from attending the press conference, a virtually unprecedented move against someone who doesn't work for Church Militant.

As the presser wore on, Malone continued deflecting and sidestepping and giving bloated long-winded non-responses to each of the questions. This guy should run for office.

But some interesting unintended side news did emerge — or, better, slip out.

When asked about local Catholics being peeved off and withholding donations even more than they already have, listen to what slips out of Malone's mouth.

Notice what he admitted, that the problem has been going on for decades, making his predecessors complicit.

It's not enough to talk about the misdeeds of priests, they were allowed to continue on for decades precisely because of bishops, and in the specific case of Buffalo, two bishops in particular: Bp. Edward Head and Henry Mansell.

It was under Mansell that Christ the King Seminary went from high octane gay to nuclear.

So here's a question for dozens and dozens of today's current bishops: Why don't you just come out and admit that your predecessors set the stage for all this filth because of their actions?

Not saying that, not telling the truth about the men who preceded them, makes them complicit in keeping the laity in the dark. Make no mistake, this is a deliberate choice to cover up and they keep covering up until cover-up is exposed.

And the only way the cover-up is exposed is by inside personnel proving what's really going on, either by dumping documents like Malone's private secretary, Siobhan O'Connor, did last year or secretly recording incriminating conversations like his priest secretary did this year.

One reporter fired a question at Malone asking why not one, but actually two inner circle intimates would actually expose his misdeeds. In typical fashion, he turned it around and made it sound like there is something wrong with the whistleblowers, not him.

He didn't have any comments about the more than 8,000 signers of an online petition saying he needs to go. They clearly do not support him.

Malone has now been reported to the local media by, count 'em, a number of seminarians, his personal private secretary and his priest secretary.

And yet he stands there as no none of this is any big deal.

Those charges made by insiders have included covering up predator clergy, misreporting numbers of accused priests, an actively gay clergy, the sexual harassment of seminarians and reinstating accused priests following do-nothing investigations.

Malone is setting the bar for prelate accountability at an all-new high and proving yet again why Catholics find it so, so difficult to trust the men in miters. 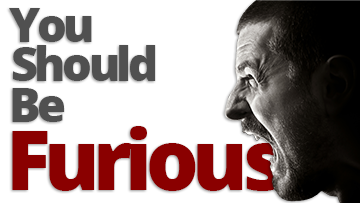 You Should Be FURIOUS
You are subsidizing clerical gay sex.