This is one destination you want to avoid.

This Vortex is coming to you from Manhattan in the archdiocese of New York. If I may ask each of you today to offer a short prayer for my mother — Anne Josephine. Today would have been her 83rd birthday. God rest your soul, Mum, and eternal rest grant unto her, O Lord.

A very disturbing trend has been developing over the past few years in major urban centers like New York. Call it the development of "destination parishes" — the process whereby a Catholic parish slowly converts from concentrating on the Church's mission of salvation to focusing on more earthly cares. Unsurprisingly, talking points of the new social justice parishes happen to align almost perfectly with the talking points of the Democratic Party on every single issue with the exception of abortion. Abortion is never really promoted in the destination parishes — it's just that its completely ignored.

These parishes get a pastor who is a social justice warrior, and bit by bit the whole social justice agenda walks in and is installed as the status quo. So what happens is parishes are converted from centers of Catholicism into havens for homosexuality, incubators for illegal immigration activities, centers for climate change radicalization and just about every other social justice activity you can imagine. The backs of these parishes look more like Democratic Party headquarters than a Catholic church.

Of course you won't see this front and center near the cathedral, except of course on St. Patrick's Day where gay groups marching in the parade dedicated to the patron saint of Ireland give the impression that the Church is down with the whole gay thing. It's the Catholic Church completely having sold out to the Democratic Party, pretending it's all Catholic dogma and Church teaching.

The term "destination parishes" comes from the idea of creating a parish built around a theme like embracing LGBT or immigration or friendliness to toward Islam or climate change — usually all of the above and publicizing that identity so people who support these causes can travel to this parish and make it their "destination." It's a complete overthrow of the prior understanding of a parish as a geographical center for area Catholics to come and worship in so they don't have to travel too far.

Here in New York, it takes very little time to recognize the reality of "destination parishes" if you know what you're looking for. In a short amount of time, we found parishes advertising themselves as destinations for those interested in illegal immigration issues, as well as parishes that invited people to come to them to engage in the topic of climate change, as well as, again, the issue of being open and welcoming and interested in issues about Islam.

This is a complete co-opting of Catholic parishes by faithless clergy who have turned themselves over to a complete embrace of the world while forsaking their spiritual patrimony. Now, to be certain this is not a problem just in the New York archdiocese, but it is huge here. Everything is about so-called social justice concerns, but the consequence of that is that the parishes lose their Catholic identity — the real reason so many of these parishes are closing and the schools being shut down with them.

Why should people think they need to engage in social justice warrior behavior in a parish when they can join any one of dozens of other organizations doing the same work? Heck — they can even agitate for abortion in those other places without the marginal headache of having to deal with Catholic teaching, which is seldom taught by the way, anyway.

America is the world's superpower. What happens here will influence every other place on the planet. And New York is the capital of America — if not the capital of the universe — so what happens here has a disproportionate impact in other areas. It is for this reason that the archdiocese of New York should be focusing on an all out restoration of the Faith — a counter-cultural revolution here in the belly of the beast.

There are many fine priests here, we know a good number of them. They would be overjoyed to be given orders to take back the culture — to fight for the faith. They want to be engaged in the battle.

But the current leadership, meaning Cdl. Dolan and the gay mafia that runs the archdiocese, has no desire to go to war for the Faith. They have no faith and trust in Christ — and if any of you are listening and are stung by those words — good. Someone needs to give you a good belt across the face and wake you up and point out the evil you have allowed to engulf the Church. Do you ever give one thought to the thousands of people who, for example, walk into your cathedral everyday as tourists — their souls.

Why is no one back here assigned to hand out little tracts about the Church, explaining the glories of the Faith that helped build this cathedral. Why doesn't the cardinal hold a press conference on the steps and announce that the Church has been too quiet too long about the sins of sexual immorality. He should denounce his personal push for gays in the St. Patrick's Day Parade — right here on the steps of his cathedral. Well, his cathedral until it is taken away from him, ultimately by Our Blessed Lord.

He should announce a giant push on the part of the archdiocese for the Courage program. He should announce that out of charity and clarity, he is no longer allowing LGBT ministries in any parishes that do not overtly and regularly teach the Catholic Faith on the matter, meaning chastity. He needs to take back the "destination parishes," whose evils have advanced greatly on his watch.

Does Cdl. Dolan not realize he has to answer to Almighty God for the souls that go to hell on his watch if he hasn't done everything he can to save them? In a few days, he's scheduled to be at a men's conference at St. Joseph's Seminary at Dunwoodie in Yonkers. Men for the archdiocese should descend on that conference and politely demand that the archdiocese be turned around — that children be taught the fullness of the Faith in the few remaining schools that exist, that the aggressive homosexual and transgender insanity that has engulfed the parishes finally be pushed back against, that the lavender mafia that runs the place be outed and dealt with, regardless of their connections to Cdl. O'Brien in Rome.

The archdiocese of New York is in full retreat on every front. Its parishes are being converted into dens of the Democratic Party with its death dealing agenda. Schools are being closed so fast because they do not teach the Faith — and yes it is a spiritual issue, not a financial one Your Eminence — that he has to go begging for money from his Democratic pals in Albany who so far have remained pretty tight fisted.

Catholic identity, already on a steep decline before Dolan arrived, has been heading down the toilet since his arrival. When the cardinal's time is up here in the Big Apple, what will his legacy be? What condition will the Church be in? Will he have left it for the better or for the worse? Enough with the politics Your Eminence, turn to Christ for the good of your own soul and your sheep. Your clock is running out. You've already been here eight years, and there is no turnaround in sight nor have you laid the groundwork for it. You can rail against me and other concerned Catholics all you want — you should be concerned not about us but Jesus Christ. All the backslapping and buffoonery and loud laughing will avail you nothing at your judgment. The souls that were in your care is what you will be judged on. 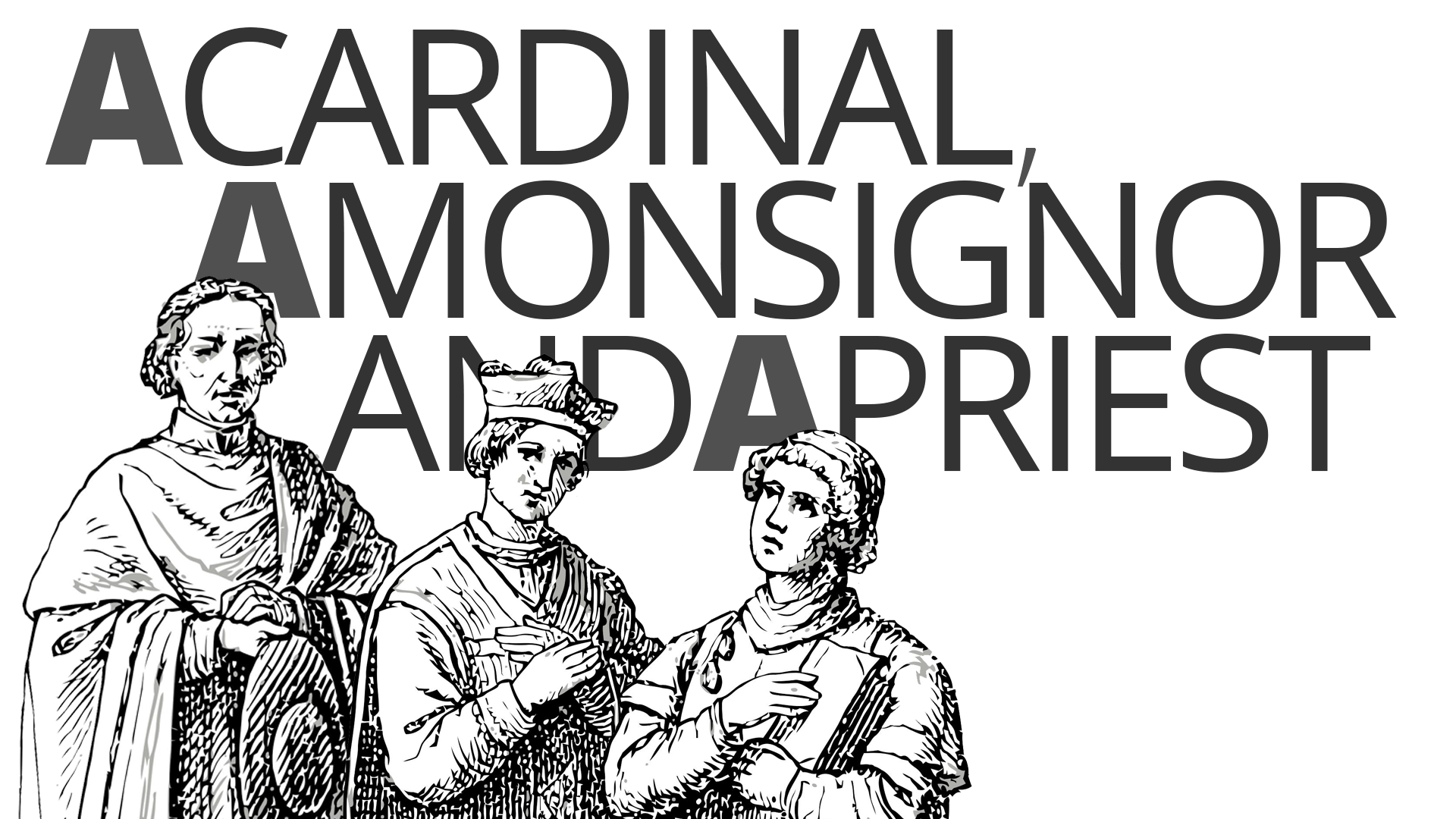 A Cardinal, a Monsignor and a Priest
They did more than just walk into a bar.