Because it's their failed history.

It's time once again for the spring gathering of the U.S. bishops. They gather twice a year, in June and November, to address various concerns and so forth for the Church in the United States.

In the past, these gatherings have been used by liberal bishops, who always seem to have the dominant personalities in the room, to bully weaker bishops and browbeat them into accepting more so-called progressive action items.

Note, for example, the last time they gathered in November, when Cardinal Cupich, along with Donald Wuerl, had orchestrated a secret capitulation plan with the Vatican and simply ripped the rug out from under the rest of their "brothers," some of whom were anxious to begin addressing the homopredator crisis head-on.

Ah, but not so fast was the message sent to them. And just like that, presto, everything was kicked down the road to the Rome sex summit three months later, where the homocrowd in the Vatican could handle the whole affair on their own turf.

Cupich was given the starring role in that phony summit, if you remember. Well, here they are all again, gathered in Baltimore, and for what, pray tell? Since their last spring meeting, take a look at the log of what has happened:

Drip, drip, drip — and anyone who thinks this "faucet" isn't going to keep leaking for years to come must be high.

And to underscore the complete blindness and tone deafness of so many bishops, in the middle of all this, various of them are actually launching fundraising campaigns to fleece the flock of billions of dollars collectively.

And to date, not one single solitary bishop has stepped forward and admitted they knew about the McCarrick mess and all the associated evil. In fact, a number of them have actually lied about it repeatedly.

Only a very tiny number have even breathed the word "homosexuality" in connection to all this.

Some even taking great pains to out and out deny it has anything to do with the 80 percent of victims being physically mature teenage boys who are raped and sexually assaulted.

So what exactly is the point of gathering in Baltimore if the vast majority of them refuse to deal in reality?

This is either the most brain-dead or negligent or malevolent or cowardly group of men to ever don miters — or all the above.

Here is the fundamental reality of the situation. And it is a reality laid bare by the collective failure to address the Fr. James Martin situation.

The bishops, perhaps because many of them are homosexual themselves or because they feel some weird allegiance to brother bishops they know are gay from their past friendships in seminary days, whatever the cause, they will not accept the reality that homosexual men should not be priests — as the Vatican instructs, by the way — as well as Pope Francis himself has said.

For decades since the 1960s and moving forward, homosexualist men like Detroit Cardinal John Dearden and Chicago Cardinal Joseph Bernardin reshaped the American episcopate and populated it with homosexuals — many of them active.

These men went on to recruit even more homosexual men and gave them increasing power and influence in the Church, so much so that the priesthood has now taken on the trappings of an actual gay profession, as The New York Times itself opined 10 years ago.

Many of those same men are sitting in that large ballroom in Baltimore this week - trying to figure out what went wrong and which new policy and reform plan they can institute.

The most effective plan they could launch would be for every one of them who is homosexual to resign. It would also empty a good portion of the room.

But of course, that won't happen. They just don't see anything fundamentally wrong or problematic with homosexuality, meaning they don't really believe what the Church teaches, that the inclination is disordered.

They reject in their hearts Church teaching, yet prance around with their miters on, making them, fundamentally, men lacking in integrity.

These men stay because they want to use it to assuage their guilty consciences, and they don't care if they take the whole thing down with them — souls and all.

This is why men like Detroit Archbishop Allen Vigneron leaves a gay prostitute priest in place, even promoting him when he knew all about him.

It's why Buffalo Bishop Richard Malone returns a homopredator priest to active ministry even after it's revealed he went after seminarians during his time as rector.

They deny history, precisely because it is their failed history.

It's why James Martin is such the bellwether on all of this evil. If you want to know if there's been a sea change among this morally corrupt lot, then look for the public denunciation of Martin's homoheresy.

If that happens, then there might be a light at the end of the tunnel.

Until that happens, look for more praise and promotion for known homosexual clergy in a parish near you; more public attacks against faithful Catholic laity calling out the evil; more blather about joyful bands of missionary disciples and, of course, more calls for your money by the truckloads.

Of course, all of that will continue right alongside police raids and subpoenas and search warrants and state and federal charges with the accompanying decline of the Church on a scale never before seen in human history.

To quote the lying, cheating, cover-up Cardinal Donald Wuerl, who Pope Francis labeled as noble, good thing it's not a massive, massive crisis. 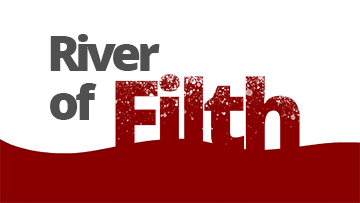 River of Filth
ROLL Saul Alinsky and the bishops.