And their brilliant, diabolically sinister plan.

Catholic doctrine clearly lays out for us what happens when the priest pronounces the words of institution over the bread and the wine. It's called transubstantiation, and it means that the visible aspects — what we see and taste and feel, etc. — those appearances remain, but the actual substance — the what that is there — has become the actual Body and Blood of Our Blessed Lord.

In the normal, day-to-day natural world, a thing's accidents are part and parcel of the thing itself. But those accidents/appearances can change in themselves without changing the substance. For example, hypothetical Jane could be overweight and out of shape, so she changes her diet, hits the gym and drops a lot of weight. Her appearance has changed, but Jane is still Jane — change in accidents, same in substance.

Let's say our hypothetical Jane dies suddenly. The substance of Jane no longer exists in this natural order. All her accidents — her appearance — therefore begin to disintegrate, or more specifically, decompose. Soon, in the grave, her body will no longer be XX weight and XX feet tall. Those accidents no longer have the substance of Jane to cling to, to adhere in. Her beautiful blue eyes will be gone.

When the substance changes, the accidents cease.

Now let's take this beautiful reality and use it as a prism of how to view the wickedness going on in the Church.

There are sinister Churchmen who are attempting to perform their own "transubstantiation" regarding the Church. They are trying to change the substance of the Church while maintaining Her appearance.

To them, the divine reality of the Church isn't a thing. The Church is just an organization tied to some medieval rules meant to suppress sexual urges through fear and threats of Hell. The sacraments, the devotional life, the liturgy, all of it, in their twisted view, is just part of a larger system which reinforces a wrongheaded notion of what the substance of the Church is, or rather, should be.

Yet the accidents, the appearances of the Church, keeping them somewhat intact, remains helpful for the moment, as the change in substance, the substantial change they seek, is going on under those appearances.

They are shifting the substance of Catholicism while keeping the accidents in place. And why shouldn't they? It is a brilliant, diabolically sinister plan.

The Catholic Church is unlike any organization in the world. No other body on earth represents the vast diversity of humanity, association with governments, speaks every language, a vast financial empire and so forth. For the sinister men in robes who wish to implement and bring about a new world order, the Church is enormously useful. Why would they want to destroy it?

But the structures of the Church Herself — the buildings, the physical plants, the investment portfolios, the relationships with world leaders, all of it — those they would never surrender. For these men, those things are the Church, to be used and manipulated to bring about an agenda.

But the actual faith? Get rid of it. It's not in keeping with the designs of the elite, among whom they count themselves.

These men are destroyers, and they have many useful idiots in their employ.

This is what is going on: a sinister "transubstantiation," if you will, a retaining of the appearances while the substance is gutted and replaced.

Faithful Catholics — clergy and laity — need to wake up to this and begin to resist all of it. We resist through prayer and action, faith and works.

It's a war — the war — and we need to start treating it like that. 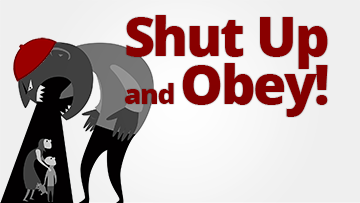 Shut Up and Obey!
Think again, Your Excellencies.