You have to first destroy, to build.

This past weekend, Church Militant was at Cleveland Right to Life's "Bring America Back to Life" event, where we were once again honored to be presenting. One thing interesting about Church Militant coming to these events is the flood of comments we get from hundreds of people about our usual day-to-day work.

In the beating heart of the pro-life movement is a vibrant Catholicism — steeped in the faith, belief and truth that every man and woman is made in the image of likeness of God (and therefore possess a certain dignity). It's truly a blessing to attend these types of events with other men of goodwill and to speak directly with people who follow us and greatly support our work.

We also get to speak to a pretty amazing number of clergymen as well. Their comments are just as supportive, and, in many cases, even more so because, while many laymen get the reality of the nightmarish condition of the Church at present, the clergy — who are good men and faithful priests — understand it from the inside. So while they may be more private in their praise and support of our work, they are also in some ways, more effusive.

One of the things we hear from them is how a good number of bishops and establishment types absolutely detest us. "Hate your guts" is one phrase that comes up with some regularity. Oh well. While we don't harbor the same feelings or thoughts for them, we do detest their works of darkness, of which there are many.

It seems, however, that in the past few months, perhaps a little longer, in addition to being labeled as "demonic," and "doing the work of the Devil," the memo seems to have been circulated among many prelates that Church Militant should be spoken of in terms of "destroying the Church."

The memo seems to have been circulated among many prelates that Church Militant should be spoken of in terms of 'destroying the Church.'

Internally, we are branded as the unforgivable "divisive." So let's be clear on this front, shall we? There is truth to these assessments of being "divisive" and "destroyers," but not the way the wicked prelates want you to think. Church Militant is dedicated to the restoration of orthodoxy throughout the Church, with the specific aim being the salvation of souls. Period.

That is it, nothing more.

However, in propping up the truth and glory of the Faith, it has become evident that some things — many, in fact — need tearing down, need demolishing. Unlike Martin Luther, who tore down to create something new and false, Church Militant demolishes untruths in the Church to strip them away and restore the glory.

Remember, Martin Luther and most of that first generation of Protestants, were, in fact, rotten Catholics. They were renegade, immoral, disbelieving clergy who despised the Faith and trumped-up all kinds of theological fantasies to rationalize their destructive behavior.

It's pretty much like many of the hierarchy these days. It's clear from looking at the U.S. hierarchy collectively, they are either stupid in matters of the Faith, malformed, uneducated, cowards or wicked men — or some combination of all the above. They are, in essence, Protestants who, this time around, simply stayed in the Church, which, by the way, at least Luther had the decency or integrity to leave. These men today don't.

They don't really believe or stop to consider that the Catholic Church is the one true Church. Period. And all other so-called churches are manmade and, therefore, false. They do not contain within themselves the true means of salvation. They may contain certain elements of truth, but only insofar as they align with the truth of the Catholic Church. Alone, they crumble.

Yet we'd bet you nickels to donuts that the vast majority of today's bishops in America don't even come close to believing that. For the record, Your Excellencies, a dogma of the Church is that there is no salvation outside the Church, and no, just because someone is baptized does not mean all is good.

In fact, given the dismal decline in baptisms in recent years, we're not even sure that is a point you would believe. Here is a sad truth that must be embraced moving forward for any Catholic serious about engaging in the spiritual war for the Church, and it is this: Many Catholic bishops are not really Catholic (not Catholic how it matters, anyway).

Sure, they were baptized and ordained and so forth in the Church, but the Church is not in them. They don't love the Church; they don't transmit the truth of the Church. They likely do not even believe the teachings of the Church, at least many of them. They allow dissent, evil and immorality to run rampant with their priests, staff, faculties, theologians and so forth.

So yes — does Church Militant seek to actively destroy this evil? You bet your sweet crozier we do. This evil prevents the truth of the Church from being presented to people. It more than waters it down; in many cases it actually obliterates it. How else can you explain that more so-called Catholics believe in same-sex marriage than they do the Real Presence of Christ in the Blessed Sacrament?

More so-called Catholics accept contraception and the murder of children in the womb than attend Mass. So-called Catholics believe these perversions because their bishops believed, accepted and embraced them first. And now, the shepherds are merely transmitting to the sheep what they have to offer, which is anti-faith.

It's clear from looking at the U.S. hierarchy collectively, they are either stupid in matters of the Faith, malformed, uneducated, cowards or wicked men.

But there is one forgotten group in all this — good men who are priests but who have not been properly instructed. To these men, and we know there are many, you hear the constant derision of Church Militant from the episcopal ranks. So we'd like to propose this to you: Decide for yourselves.

See if we are all about destruction and division for its own sake or if we understand this is necessary for the restoration of Holy Mother Church. Any priest who wants to be offered a free Premium account to view our theological and catechetical programming — thousands of hours — please contact us (by email or phone call), and we will set you up, free of charge to view as much as you would like.

And for the record, this particular idea was actually proposed to us by a priest. We know the reputation we have (however undeserved). But we want to make one thing extremely clear: We love Holy Mother Church. If/when the time arrives to die for her, we pray that we be given the necessary grace to endure martyrdom.

This is the bride of Christ. Nothing else on earth matters — nothing. This is the only religion established by the Incarnate Eternal Word for our salvation. To willfully die separated from the Church is to virtually ensure your own damnation. Popular? Nah. Politically Incorrect? You bet. Extremist? Without a doubt.

But if you are not suffering for the truth, then you don't love the truth. And since Jesus Christ is truth, that means you die, of your own volition, outside His loving embrace. When is the last time you heard your bishop tell it like that? And if the answer to that question is either "I can't remember" or "They never have," then ask yourself, "Why not?" 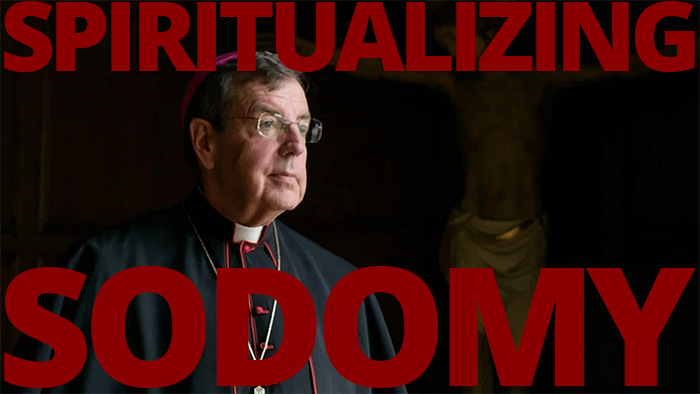