When will it end, Lord?

Whenever Jerusalem appears in the Psalms or Old Testament canticles, it is almost always also an allusion to Holy Mother Church.

The same is true even in St. John's Apocalypse: "I saw the new Jerusalem coming down out of Heaven."

There is one reference in particular to Jerusalem in Jeremiah's canticle, where the prophet cries out:

Let my eyes stream with tears day and night, without rest, over the great destruction which overwhelms the virgin daughter of my people, over her incurable wound.

If I walk out into the field, look! Those slain by the sword; If I enter the city, look! Those consumed by hunger.

Since Jerusalem is symbolic of the Church, could any faithful Catholic imagine a more apropos comparison to today's state of affairs?

Focus in particular on those last two points, outside the walls of the city, people killed by the sword, those inside consumed by hunger — "famine" in some translations.

A more perfect analogy you could think up — Catholics outside the Church are killed by the sword today. Mowed down by the Culture of Death and its violence, a culture which glorifies death and violence and murder, all because of people abandoning themselves to their lusts.

And this is not limited to just physical death, but death of the spirit.

How many young people see no hope in the world and turn in on themselves because their families have been destroyed?

How many resort to pornography, suicide, addictions and a hundred other ways of succumbing to violence of the soul?

But notice, Jeremiah not only talks about the destruction of the people outside the walls, he also deals with the even more disturbing issue of famine/starvation within the walls.

That is precisely the case today in the Church, thanks to corrupt homosexual liars and thieves who are bishops. They starve the faithful of the truth; feeding them sweet-tasting poison instead of nutrition.

They have set out on a course to destroy the beauty of the Church, and they have done it on every conceivable level, from the physical architecture to the movement of the Mass and liturgy.

They have dumbed-down Scripture, assaulted the truths of the Church, ruined lives and souls on a never before imagined scale. People inside the walls have very little access to the truth because those guardians of it refuse to give it, so the people starve.

The situation could not be more distressing, and now, the barbarian hordes, to mix historical timelines, are descending on the Holy City.

More than 500 lawsuits for mostly homosexual predation from years past were filed in New York last week on the first day filings were allowed. And that's just day one, and that's just New York.

New Jersey, stomping ground of homopredator in chief McCarrick, opens its window in a couple of months.

Church Militant is receiving reports that various dioceses are shredding documents, that some chanceries are being caught off guard and the institutional PR machine which, to this point has managed to cover up the crimes and keep the public image facade going, is beginning to break down.

Too many clergy have become corrupt, personally and professionally.

Just a simple glance at the archdiocese of Washington, D.C. provides ample proof.

For years, Msgr. Walter Rossi has been the rector of the National Basilica of the Immaculate Conception, sort of the crown jewel of U.S. churches. And there are a flurry of reports, from a large number of sources, that he is also a practicing homosexual with gay lovers who are both former priests and current priests.

For more than a year, he and the corrupt gay mafia which runs the Church were able to ignore and dismiss the storm of allegations, even calling the police on reporter George Neumayr and forbidding him inside to even attend Mass.

Neumayr, a good friend and associate of Church Militant, was the first authentic Catholic media reporter to break the story of Rossi's double life, which is not hidden very well at all.

And yet, not one member of the corrupt gay mafia running the Church lifted one finger to investigate, restrict him, remove him — nothing.

Compare the treatment of the Rossi case in D.C. to the mishandling of the case in Detroit against Fr. Eduard Perrone.

A single 40-year-old repressed memory from a very questionable accuser was determined to be enough to publicly announce to the world, including advance calls to the Associated Press by the archdiocese of Detroit under the direction of Abp. Allen Vigneron, to announce to the entire world the case and remove him from the parish.

Yet Rossi, who co-owns condominiums with alleged gay lover priest friends, a publicly known and verified fact, nothing happens to him.

Last week, recently installed new D.C. Abp. Wilton Gregory punted when asked at a public gathering why nothing had been done about the notorious Rossi.

He said, since Rossi is a priest on loan essentially from the diocese of Scranton, that it would be up to that bishop to investigate.

That bishop is the duplicitous, James Martin-loving Joseph Bambera, who rumors are circulating about that he will be moving to be archbishop of Philadelphia once Charles Chaput ages out in a few months.

This is not the first Bambera has heard of the Rossi case. Yet, because this is how the corrupt gay mafia works, he has ignored the multiple accusations against Rossi.

That is until the heat, thanks solely to the hard-pressing unrelenting stories from the likes of George Neumayr and Church Militant, finally bubbled up to the surface and caused Abp. Gregory to have to answer at a public gathering.

The day after the public gathering, the diocese of Scranton and Bambera, who is known among faithful Catholics in the Scranton diocese as "Bambi" owing to his homosexual-friendly approach, were forced to announce a formal investigation into the charges was beginning.

So why is Rossi still walking around? Why isn't he removed from public sight like Perrone has been? Why can he still wear his clerics and Perrone can't?

You know the answer. And, just how public is this investigation going to be? Are there any conflict of interests on the diocesan review board?

Does Rossi have any dirt on Bambi or other Scranton clergy that will cause the bishop to "steer" the investigation from behind the scenes, directing it to a predetermined outcome?

Rossi has been deep in bed with McCarrick, Wuerl and the homopredator thieving West Virginia bishop, Michael Bransfield.

Talk about "tell me who your friends are, and I'll tell you who you are."

It's a little overwhelming for the average Catholic in the pews to understand the breadth and depth of this corruption in the Church.

Understandable; it's overwhelming for us, and we have our heads in it 24/7.

But what is easy to understand is this: Until these types of men are banished from the clerical state, never permitted to return, and safeguards are put in place to ensure this never is permitted to happen again, the beauty of the Church will continue to remain largely hidden from view.

Satan has done his work well.

These corrupt gay mafia clerics, the active ones and the cover-up ones who create and keep this culture in place, are agents of Hell and are leading souls to eternal death by the sword and everlasting hunger.

It seems the courts and billions of dollars of lawsuits will be the only thing to pry their cold near-dead hands from the Church.

If that is the case, then let it all begin. 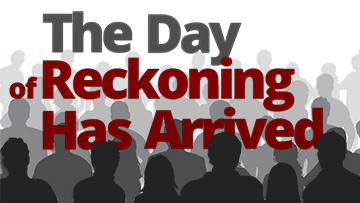 The Day of Reckoning Has Arrived
Time to pay.