Time for the archbishop to come clean.

Following up on yesterday's explosive revelation that a high-ranking official at the archdiocese of Detroit admits to being gay and living with his gay partner for 15 years, more information is now coming to light.

This story seems to be shaping up into an archdiocesan employee who is gay and apparently knows where all the bodies are buried in the gay network and, as a consequence, is being treated with kid gloves by Abp. Vigneron, lest he blow the whistle on the whole gay clergy network in Detroit — which is vast.

First, insiders tell Church Militant that various people in the chancery are well aware of Joe Balistreri's lifestyle and either outright agree or don't disagree, and this includes various high-ranking clergymen.

Secondly, it would appear these same officials are cool with gay men but, lesbians, well, not so much. Back last summer, a lesbian music director, Terry Gonda (at St. John Fisher Parish in Auburn Hills, Michigan in the archdiocese) was fired when her civil marriage to another lesbian was discovered.

Archbishop Vigneron was alerted to the claim that his archdiocesan music director was propositioning young men.

The problem was the relationship had been nearly 10 years old and was known by loads of people. But the archdiocese of Detroit sent her a termination letter saying she was "morally unfit to keep her job" so it was activating its morality clause and firing her. Yet when it comes to a gay man as opposed to a lesbian woman, he gets a free pass for 15 years. Why is that?

And moreover, as we touched on yesterday, this all came about because Abp. Vigneron was alerted to the claim that his archdiocesan music director was sexually propositioning young men. What's more, not only does the archdiocese of Detroit have the exact same situation on its hands — just the opposite sex — but this case involves not only a morality clause issue but also a potential crime.

Sexual harassment is a serious issue, and that was the original charge that brought all this to light. In the archdiocese's own policy manual, on page five, it reads under section five: "Clergy, staff and volunteers must not engage in physical, psychological, written or verbal harassment of staff, volunteers or parishioners and must not tolerate such harassment by other Church staff or volunteers."

It adds, specifically, "Harassment encompasses a broad range of physical, written or verbal behavior, including, but not limited to, the following: unwelcome sexual advances, sexual comments or sexual jokes." Likewise, given the background of claims of sexual harassment against young adult males, the question arises if the archdiocese has any legal exposure regarding Balistreri's lauded work with young at-risk youths at an archdiocesan school.

What liability do Vigneron and archdiocese have in permitting his volunteer work there knowing there is a claim of sexual harassment against him? Have they investigated if young males at the school may have been sexually harassed as is alleged in the original case?

Why were they so quick to dump the lesbian for violating the morals clause of the employment contract but have apparently looked the other way with their director of music for the entire archdiocese?

Again, insiders suggest to Church Militant it's because what and who Balistreri is aware of, having been in the archdiocese in an official capacity for many years of his young life — where many clergy have had interpersonal relations with him.

And now we have what sure looks and smells like a cover-up of not only the lifestyle of their head music man, but charges of alleged sexual harassment and a public-relations campaign to smear one of their own priests (who innocently stumbled across all this and is now being railroaded by high-ranking chancery personnel, up to and including the archbishop himself).

The real underlying problem here in Detroit is the collapse of faith among the leadership, which allowed this infestation of homosexuality into the seminary.

As a reminder, Vigneron is next in line to be president of the U.S. bishops' conference. So, given all this scandal surrounding him, Church Militant reached out to the USCCB for comment. We asked them if they are aware of any of this. And since they are now, would they be conducting any kind of investigation or considering a censure of Vigneron for his treatement of Fr. Suhy and for his covering up an active gay man living with his partner for 15 years.

We also reached out to the archdiocese of Detroit, but we are aware of a standing policy downtown to never answer a Church Militant media inquiry. We can't really understand why. That doesn't seem very "dialogue-y."

The real underlying problem here in Detroit is the collapse of faith among the leadership (stretching back decades) that allowed this infestation of homosexuality into the seminary leading into the presbyterate and, eventually, into the hierarchy over the years.

Detroit, under the leadership of Cdl. John Dearden from 1958 to 1980, was, in fact, the epicenter of all this in the Church in the United States. Many of the men involved in all this evil were his protégés and ordained by him — including Vigneron and his current older clergy insiders.

However, there does seem to be a quiet revolt among some younger priests here who are sick and tired of not being backed up by Vigneron when they proclaim Church teaching. What we do know is this case has the very real potential to blow the lid of all this. So we will wrap up where we began: Why did the archdiocese dump the lesbian in record time, but retain the self-admittedly gay man —who has been living with his "partner" for 15 years — on the payroll?

The answer to that question is the key to the entire network here in archdiocese of Detroit. Answer the question, Archbishop. 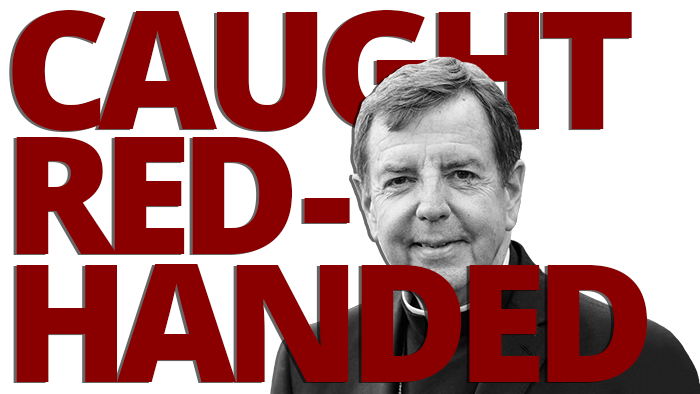