They hate Christ and His Church — just like Judas did.

If there is one point that is emerging in the wake of the sex abuse scandal, it's this: A number of bishops are simply blowing off the faithful.

They treat the Church like it's their own personal playground and demonstrate a "drop dead" attitude to the faithful.

While there are a huge number of examples that fit the bill here, we want to focus your attention on three because they did stuff most recently.

First, Cardinal Joseph Tobin, a hypocrite if there ever was one because he is a prince of the Church — the Church he continues to give the finger to because of his embrace of sodomy.

And for the record, that is what he is supporting — not just a person having an orientation that is homosexual, but actually acting on it. He embraces all of it.

This past weekend at Our Lady of Grace in Hoboken at 9 a.m., the regularly scheduled parish was offered for the second time in support of sodomy — the occasion being the homosexual pride of the month of June.

A good number of actual Catholics, unlike the cardinal, the priest and the participants demonstrated and prayed in front of the Church in reparation for the sacrilege.

As for Tobin, he's all down with men having sex with men and labeling the deadly sin a "gift from God."

Let's shift over a little to the west to the diocese of Buffalo and the disgrace of man who is dripping with so much hubris, he won't even consider resigning despite lying about the number of rapist clergy in his diocese — most of them homopredators — as well as the keeping in service at the altar, men he absolutely knows are active homosexuals.

Richard Malone is holding what he laughingly terms "listening sessions" but which he apparently means everyone listens to him and shuts the heck up.

And for the record, this is the same bishop who actually put the former rector of the seminary, Joseph Gatto, back into parish ministry after hed been bounced for soliciting sex from his own seminarians.

Likewise, three priests he had to pull for lewd and filthy sexual conversations in front of seminarians — hey, they're safe as well; stuck in the penalty box for a few minutes and back in service. Anything gay goes down well with Malone.

For example, here is, word for word, what he said at the recent listening session about homosexual men who are priests, according to attendees: "Homosexual priests are here to stay, that will not change, and the canonical requirement for gay candidates is to be chaste for three years before ordination."

Apparently, what they do after ordination, he doesn't give a hoot about.

Then there's the king of the homosexual hill when it comes to all things gay, John Stowe of Lexington, Kentucky, who twists Scripture around like the devil he is to make it sound as though God actually actively creates, by an act of divine will, people with homosexual orientation.

He authored a prayer saying it and quoted psalms in a diabolical disorientation of the mind of the Holy Spirit saying homosexuals are "wonderfully made."

He spent a lot of face time with Cardinal Blase Cupich at the recently concluded gathering in St. Louis of dissident priests.

Those two devils have something cooking, and it won't be the promotion of the truth, you can bet on it.

So where are all the other bishops? They know about this? These stories and articles and social media postings are all over the place.

Every day that agent of Hell, James Martin, leads more souls to his "father" — and still not a word from any of these hireling shepherds.

They say nothing — apparently not even privately.

Now some, no doubt steeped in Church of Nice niceties and protocols, will focus in much more on calling bishops devils — devils who lead the faithful away from their heavenly home — than focus on the actual evil.

We are perfectly happy to leave that question to Our Lord at our individual judgments.

Church Militant will have a ready explanation for what we have said; pretty darn sure that the Church of Nice gang, including the fake news Catholic establishment media, will have not a word to say.

They are enablers of this filth, this evil, and they have let their personal opinions of us cloud their objectivity.

They don't want to report on what we report because the homosexual bishop crowd will cut them off and their days of carrying their water and writing press releases for them disguised as news articles will be at an end.

And yes, we're looking right at you EWTN and CNA.

So here we have, on the record, successors of the Apostles saying: Sodomy is OK; that God actively wills and creates the homosexual condition; that gay men are here in the priesthood to stay.

And yet nothing, not a peep from the enabling Catholic establishment media.

They would have apologized for Judas and made up excuses for him. In fact, too bad for Judas that EWTN and CNA weren't around, he'd have come off much better in the gospels than a thieving traitor.

Pay close attention, faithful Catholics, the ranks of the bishops are filled with devils, and they are supported in their evil by a group of small-c "catholics" more concerned with protecting the establishment than telling you the truth.

But good thing it isn't a massive, massive crisis.

In about seven years or so, by current demographic trends, the Church of Nice along with its cover-up specialists in the establishment media will have completely imploded.

The rate of self-destruction of this crowd is accelerating as the clock winds down on them.

So stay faithful, the few of you there are right now.

In a short while, you will be all that is left, and we will have survived this demonic experience and begin to rebuild and restore.

And we will have learned that the curse of the Church is Judas bishops — devils with miters. 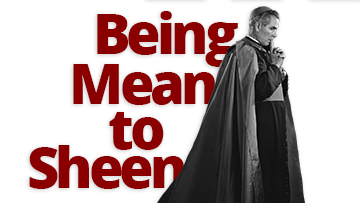 Being Mean to Sheen
Dolan's final act of disrespect.