And they are going nowhere.

There is nothing on the table that isn't being weaponized by the Left — and we are talking about the Left inside the Church who, for the record, really aren't in the Church because they reject Church teaching on a variety of issues. And they are digging in.

Nonetheless, since they continue to portray themselves as "Catholic," then they get to be treated as "Catholic," meaning their propaganda should be exposed on a theological level for the garbage that it is.

One of the leading provocateurs in the lefty Catholic camp is Austen Ivereigh, British author who never misses a chance to foster dissent. For example, just before the infamous Sex Summit began in Rome last February, Ivereigh tweeted, "Why do you say our Lord had no homosexual tendencies? By what signs or gestures do you deduce this?"

He was in a Twitter war with Fr. Jacob Straub, who responded, "This is very scandalous and possibly a heresy. You need to remove this tweet and confess your sin. Lord, have mercy."

Ivereigh, who used to write for the notorious leftist Catholic rag The Tablet, located in the U.K., really came onto the radar for publishing a book on Pope Francis, The Great Reformer: Francis and the Making of a Radical Pope, back in 2014, jumping on the bandwagon of Team Francis.

Ivereigh is happy to not just support the so-called reforms of Pope Francis, but he never loses an opportunity to slam other Catholic media who question those reforms. Anyone who questions the pope's moves gets torn to pieces by Ivereigh and the rest of his gang (although many of those same men had no problem openly criticizing Pope Benedict or Pope John Paul).

Ivereigh, you might recall, is the same fellow at one of the first press conferences of the Amazon Synod who tried to portray the Pachamama statues (really idols) as Our Lady and St. Elizabeth — until he got contradicted by panelists, and eventually the pope himself, who called them Pachamama, not representations of Mary and Elizabeth.

But with this crowd, whatever helps push the narrative is all that matters.

A few days back, America Magazine, the flagship publication of the largely dissident Jesuit order, hosted a book launch party for him for his latest tome titled Wounded Shepherd: Pope Francis' Struggle to Convert the Catholic Church.

The use of the term "convert" in the title is more than a little telling. Of course, Ivereigh's book has the full-throated endorsement of homoheretic James Martin, who never met a fellow traveler along the road to overthrowing the Church he hasn't joined forces with.

Ivereigh and his crowd see this pontificate as a tool, perhaps a willing tool, to talk in generalities about Church teaching and downplay any specificity. So in his book and in his comments at the book launch, he talks about the need to stop talking about dogma or doctrine and start emphasizing personal experience in making moral judgments — meaning, at bottom, whether to commit sin or not.

Problem is Ivereigh and company don't seem to either know or care anything about the actual concept of sin and its resultant consequence of damnation if a soul were to die in that state. But that doesn't matter to these guys. They don't really believe in the Church as She is actually constituted.

It's much easier for them to think of and present the Church in terms of a giant multinational outfit, whose mission is to create some kind of utopia — Heaven on earth — as opposed to focusing on attaining actual Heaven.

To this end, any moral teaching, especially the ones on sexuality, are free to be passed over because those sins aren't really sins, their rightness or wrongness being left up to the individual's "personal experience." But eat a piece of beef or contribute to so-called man-made climate change — and the fires of Hell await you.

Ivereigh straight up is a liar, who follows the agenda of the Left like the nice, little waterboy he is. For example, the uproar about the Pachamama idols prompted him to say that it grew out of EWTN-fueled panic that never asked indigenous people themselves about the "idols."

That's not even in the slightest imagination true. EWTN was not the first to report on the Pachamama. As far as we can tell, Church Militant was the first to identify the statues as symbols of Pachamama and demonstrate their connection to "Mother Earth," or more specifically, "Earth Mother."

For the record, it may not have been us, but if it wasn't, we were certainly among the first, and it was not EWTN.

Secondly, the so-called "indigenous people" didn't need to be asked specifically when the reports were first issued, because the very telling video moment of them bowing down to them on an earth blanket in the Vatican Gardens said a lot all on its own.

And why didn't Ivereigh go and ask the "indigenous people" swarming all over Rome, instead of sitting in the Vatican press hall getting shot down by the panel when saying the statues were of Our Lady and St. Elizabeth?

Where did he get his wrong idea? Certainly not from the "indigenous people," because the statues are a symbol of Mother Earth and fertility and so forth, as they themselves — and the pope and the Vatican — have said.

There are so many ways to dissect the lefty Catholic crowd's agenda and war on the truth that it's actually easy. On the sex abuse crisis — proven time and again that its foundational cause is homosexuality, seeing as how four out of every five victims was a teenage boy — Ivereigh simply ignores that truth and says of that assertion: "This leads to terrible diagnoses, best example is their diagnosis of the sex abuse crisis by likes of Viganó and Cdls. Mueller and Burke."

Of course, Ivereigh is demonstrably wrong, so much so that he seems to require more pity than correction.

In perhaps his most telling quote, demonizing anyone who supports Tradition in the Church (meaning clear doctrine), he says: "Everything is filtered through an 'ideology of suspicion'" by a party that is trying to undermine him.

"This is a direct attack on his leadership" but "of course they don't see it that way." They say it is justified in the name of saving the Church, and in the "name of Tradition."

Hey, Austen, have you looked around the Church these days? For the past half-century, in fact?

Of course, things have to be viewed in a suspicious manner, just like a fire chief looks at a four-alarm blaze in a suspicious manner, until the objective truth is arrived at. You and your carrying of the water for the Left must also be looked at suspiciously, and eventually denounced — yours and the rest of your elitist-minded "journalist" crowd.

You are little else than mere stenographers for the Left.

You aren't journalists. You are little else than mere stenographers for the Left, dutifully repeating their talking points because they excuse any sin you may enjoy. You desire nothing else than to keep the discussion of morality centered on earth as opposed to Heaven.

That is not what the Savior of the world desired. You might recall that loving God is the First Commandment; neighbor comes second. Heaven comes before earth on the priority list. 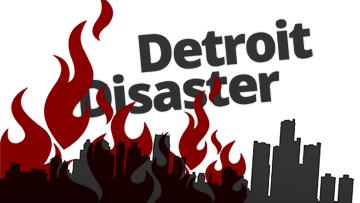 The Detroit Disaster
A demolition of a diocese.