One thing the Marxists are really, really good at is distorting the truth. In fact, no one does it better. In fact, if someone is really good at distortion, chances are they are either full-on Marxist or sympathetic to the larger goal.

At some point, you have to say that when politicians or bishops keep claiming this or that was a "mistake" or "poor judgment" that, in fact, they just got caught and are again distorting the truth by lying.

It's like the Dominion voting system that appears to have been employed throughout the country — especially in key states — to specifically switch votes from Trump to Biden. The second it leaked out that vote-switching was going on, the Marxist bastards stepped forward and said, "Nothing to see here. It happened, yes, but it was all a big mistake: Human error."

As our interview with the world-renowned anti-fraud–software programmer Jay Valentine shows, software not only doesn't but can't just switch votes. Isn't truth refreshing? In fact, human nature is built by God for truth — because He is truth.

It's one reason why people who do not accept Marxist filth are so repulsed by their propaganda, in the Church as well as out of it. Take for example the bishops in Canada: What a total farce they are. They have in place a Toronto Catholic School Board governing so-called Catholic schools — with some trustees of that board publicly condemning the Catechism!

And in U.S. politics, one of the Party-of-Death Senate candidates in Georgia trying to seize control of the U.S. Senate, Ralph Warnock, would be hard-pressed to present a more distorted picture of Our Blessed Lord. And despite the outrageous, off-the-charts claim by Warnock, it's a safe bet that at least some of the U.S. bishops would actually applaud him.

Cupich is more Marxist than Catholic.

The U.S. conference of bishops is meeting virtually right now in their annual November meeting, and, what do you know — more distortions of the truth. Cardinal Cupich stated that we shouldn't challenge the pope. Now, despite Cupich not being known for his high intelligence, that's a stupid remark, even for him.

Likewise, another dim bulb, Cdl. Daniel DiNardo, seems trapped in a time warp somewhere back in the 1950s. DiNardo has said, "I think the issues relative to racism are extremely important right now." Perhaps Cdl. "Daniel Distortion" missed the recent part of American history where horrible, racist America elected a black man as president — not once, but twice.

And when it comes to turning the truth on its head and making it sound reasonable, who else would want a piece of the limelight other than distorter extraordinaire Bp. Robert Barron?

When the McCarrick Report came out, he went to someone on his payroll — John Allen of the failed Crux website — and gave a phony "interview" where he waxed eloquent on the report. Again, being the master distorter himself, he was happy to do just that: Distort.

He said the report "was refreshingly frank in regard to the relevant popes" (by which he meant Pope John Paul and Pope Benedict were blamed for McCarrick's rise and protection). On this point, both pontiffs can certainly shoulder some of the blame through ignorance or lack of will and follow-up.

But then Barron goes on to say of Pope Francis (who resurrected McCarrick and sent him to the communists in China to destroy the Church), "He was more than willing to act decisively once he came to understand the situation." That is a distortion — if not an outright lie — by Bp. Barron.

Pope Francis knew about McCarrick before he sent him to China. His "understanding of the situation" came about when a lawsuit was filed in New York outing the monster. Only then did Francis "act decisively." But this is what distorting bishops do. They twist the facts.

And to that point, notice not only the report but Bp. Barron as well never mentioned the overriding, obvious dynamic of homosexuality permeating the entire McCarrick affair. But then again, he distorted the reality of salvation to Ben Shapiro when Shapiro, an orthodox Jew, asked him about the necessity of Christ for salvation.

Distortion: Elite clerics and politicians traffic in it — for now. 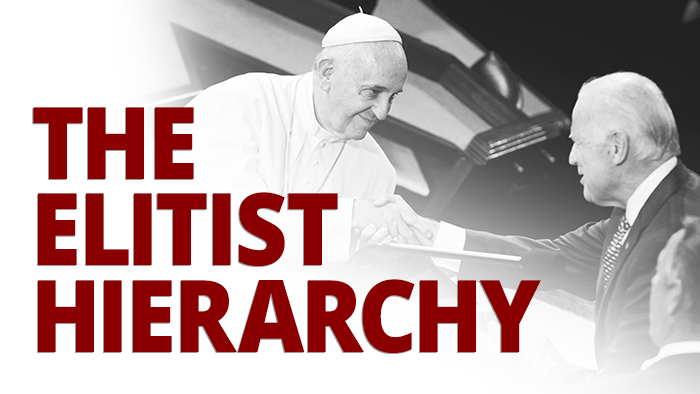 The Elitist Hierarchy
Their entire empire is built on lies.