A Pew Research poll earlier this week reveals that an enormous number of Americans are praying about the Wuhan virus.

For example, 55% of U.S. adults say they have prayed specifically for an end to the plague pandemic. That 55%, however, not only includes Americans who responded they pray everyday anyway, but get this — 15% of people who say they almost never pray are now praying and 24%, one-quarter of those who say they don't belong to any religion at all.

That is a very interesting spread of people and results. Over half the country is praying for an end to the outbreak, just about the same percentage who think abortion should be legal. And, that's roughly the same proportion who think sodomy should be a basis for marriage.

Religion in America is quite the mixed bag, and we're not just talking about varying religious beliefs, which are all over the map even within the same religion.

Of those four modes of prayer, notice only one involves actually asking for something.

The Marxist media, for years, has been making the fake-news claim that America is one of the most religious nations on earth. No, it's not so much. Because it depends on how exactly you define "religion." Do you mean belief in some god-like deity figure? That's a pretty low bar, barely a knuckle-drag above atheists. How about you're "religious" if you pray? Well, that's an improvement, maybe, kind of, sort of. It depends on what you mean by "prayer."

Catholics, of course, properly understand prayer as different approaches to God. We even have a little ditty — an acronym for it — A.C.T.S. or just Acts: Adoration, Contrition, Thanksgiving, Supplication. Of those four modes of prayer, notice only one involves actually asking for something. The other three are directed specifically to God, for God, for His adoration or worship. God is owed worship, by justice. To not adore or worship God is an offense against justice. Justice is giving the other that which is due him — owed Him by virtue of the relationship.

An employer owes, in justice, his workers their pay. The workers in turn, in justice, owe the employer their labor. So, of course, we owe God worship because he created us and sustains us. He gave us and continues to give us existence, and worship of God recognizes that relationship.

Then there is the prayer of contrition, the sincere admission of sorrow that we have done something to damage or injure the relationship between God and us. It's from this understanding that we recite the Act of Contrition, for example, to be absolved in the sacrament of confession and restored to a state of grace.

Then there is the prayer of thanksgiving. It should be the most natural response to God, realizing we owe Him everything. God has given us all that we have, either directly or indirectly providing the circumstances by which we have what we have. Saying thank you to God admits the humility we should have before our Creator. In fact, giving thanks — or thanksgiving — is the meaning of the word Eucharist, which is why after having received Holy Communion we go back to the pew and make our act of "thanksgiving."

Only after all this, which is pretty weighty, do we then approach the throne of God and make supplication — ask for something. Three out of the four types of prayer are ordered to and center around God as He is in Himself. Only one concerns itself primarily with us. If that is how Americans are praying, the right way, then that's good news.  But if it's more akin to the "God is an ATM" I check in with when I'm low on something, then we have to ask, just how "religious" is that?

Given the fact that there doesn't seem to have been some massive awakening of consciences about abortion and sodomy and the break up of the family and all the real plagues of the nation, it seems a bit far-fetched to think God will suddenly answer prayers that are, in the end, all about us, with no deference to what is owed His Divine Majesty.

Is the interior movement to seek divine assistance a good thing? Well, sure. Prayer is never a bad thing if it's real and grounded in truth. Prayer is, in fact, how we will spend eternity — the lifting of mind and heart to God. That's pretty much the definition of being in the Beatific Vision, meaning Heaven. It's why we here at Church Militant incorporate prayer into everything we do, and why we are always inviting you to join us for those occasions we are publicly praying.

Even now in the Wuhan scare, we have not ceased praying. It's just organized differently. Each morning, barring some technical difficulties because of having a skeleton crew, we pray the Church's Morning Prayer beginning at 8 a.m. ET. We follow that immediately with the scriptural Rosary, the regular Rosary with short scripture passages in between each Hail Mary. We conclude the workday at 4:45 p.m. ET with Vespers, Evening Prayer, also streamed live right on the front of the site, like Morning Prayer and Rosary.

We would really like you to pray with us. Just tune in at any of those times and offer your prayers of worship with us.

What you don't see of our prayer life is each noon we pray the Angelus followed immediately by the Divine Mercy Chaplet. And before every recording or show, we pray a Hail Mary. This apostolate is a prayerful apostolate. It is prayer that has seen us through some extraordinarily difficult situations here.

We've even added a special show live each day at 1 p.m. ET we call Marian Moments to provide a little spiritual booster-shot in the middle of the day to make sure we also think on things Divine at this time, and not be so sucked into 24-hour, non-stop news.

The world has literally stopped, life as we know it has been completely turned on its head and every single Catholic, practically trapped in their home, has a golden moment to grow in holiness.

About 12,000 or more are watching it with us, which isn't bad for just rolling it out with virtually no planning and almost no notice. So, when we say "Church Militant, Serving Catholics," we mean exactly that. We are all about teaching the Faith, giving you a safe Catholic home to come and watch, read and pray with us.

We, of course, make our prayer times available for no charge, no strings, nothing. Anything else would be revolting, not to mention sinful. And much of what we produce here — our content — we also offer at no charge. But since we are not just spiritual beings, we do ask viewers and supporters to become Premium members for $10 dollars a month to help us certainly keep the lights on, yes, but also to avail themselves — yourselves — of hundreds of hours of excellent theological programming, apologetics, Church history and so forth.

And when we say hundreds of hours, we mean exactly that. People often tell us, "I can't believe the amount of material you have to help me grow in the Faith." Like we said, we're "Serving Catholics." And that includes helping non-Catholics become Catholic.

Either this is the Church founded directly by the Son of God, outside of which there is no salvation, or it isn't, and everything it teaches is lies and built on a lie. There is no other choice. Whether America is "finding God and religion" during this plague still remains to be seen. We can pray. But we can become closer with God through His Church, learning the Faith more, and yes, praying more — an option you always have with us each day as well.

So look at this outbreak as a kind of "divine time-out" for you and your loved ones. It's fine to be all wrapped up in the news of what's going on, fair enough. You can't just ignore it. But more importantly, you can't now or ever ignore your supernatural side either. What a perfect opportunity: The world has literally stopped, life as we know it has been completely turned on its head and every single Catholic, practically trapped in their home, has a golden moment to grow in holiness.

So please, get a Premium subscription today — just click the link. And besides that, set aside time each day to pray with us. If you are already a premium subscriber, thank you for your generosity. You make the work we do here possible along with our donors. If you are signing up now, thank you in advance. 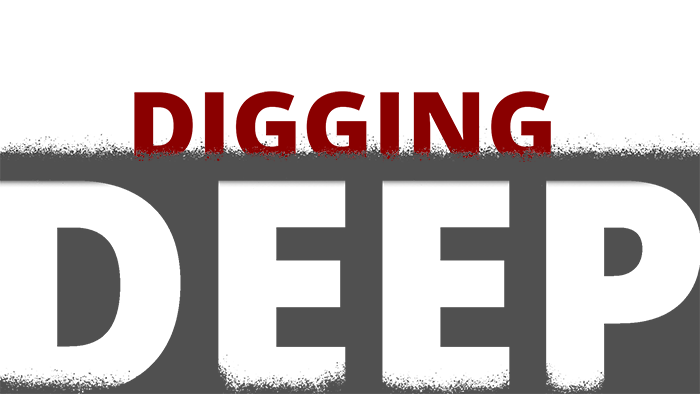 Digging Deep
And there's a lot to shovel.