Your tweets won't save you!

There seems to be a small flicker of light, a tiny discernible pulse, with a small number of bishops on the question of abortion. On a small number of social media accounts, a scattering of them is posting little quips about the sanctity of life in the womb, etc.

Take, for example, Lansing, Michigan bishop Earl Boyea, who correctly notes that if you follow the science, you will conclude that the fetus is a human being, etc. However (because there's always a "however" with this lot), an occasional pro-life tweet does not a good bishop make. In fact, not even close.

A little background on Boyea and abortion is in order here. Back in 2009, he was invited to speak at a mid-Michigan pro-life conference. He probably would have declined had he known that Church Militant was also scheduled to speak. He went first. When his uninspiring presentation was done and the floor was opened for questions, his real approach came out.

He was asked why he and the other bishops don't do something about these phony Catholic, child-killing politicians who are being allowed to receive Holy Communion and present themselves as Catholics in good standing. His response was predictably pathetic. He angrily told the questioner, "It's not our responsibility to get these guys out of office, it's yours. You, the laity, should vote them out."

'It's not our responsibility to get these guys out of office, it's yours. You, the laity, should vote them out.'

It was an especially awkward moment for Boyea because, at the time of the conference, it just so happened that the governor of Michigan was Jennifer Granholm, a child-killing, phony Catholic who had even been a so-called eucharistic minister at her parish, Our Lady of Good Counsel, in Plymouth, Michigan.

What almost nobody knows is that when Boyea was named bishop in 2008, the year before the conference, he had a private meeting with his seminarians for the diocese of Lansing and told them that they could ask him whatever they wanted.

Immediately, the question was asked what he was going to do about Jennifer Granholm and her evil of supporting abortion since he was now going to be her bishop. His response to that question said everything you need to know as a faithful Catholic. He said to the seminarian, "I've been instructed by Cdl. Adam Maida (of Detroit) to say or do nothing about that topic."

Maida, at the time, was the archbishop of Detroit in whose archdiocese Granholm had been permitted to be a so-called eucharistic minister. Boyea had been one of his auxiliary bishops during all that ruckus. So, you see how this game goes, this extremely deadly game? Weak, morally corrupt men are promoted to bishop in exchange for their silence on matters of spiritual life and death.

Another little item many might not know is that when Boyea was still auxiliary bishop of Detroit (and before the bishops had come to actually loathe Church Militant as they do now), I had a talk with him in his office. This was in 2007. I went to him because I was seeing demographic trends in the Church that were beyond disturbing. Being a media guy, you tend to be extremely aware of these sorts of things — it comes along with the territory of the work you do each day.

So, I went to him to let him know what I was seeing and if there was any way we could help — and, yes, I was that stupid and naive back then about these men. He sat down and asked me what I wanted to talk about. As I laid out the demographic trend I was seeing befall the Church, he appeared completely uninterested, actually picking lint off his trousers, never making eye contact. Aside from being rude, he completely dismissed what I was relaying to him, saying, and I quote, "Michael, you can't believe every poll you see."

Aside from the arrogance of that approach, I told him that my career had been in media at that time for over 20 years, and I know how to read polling information. He was having nothing of it and concluded the brief meeting. In short, he was saying, "Nothing to see here folks, move along."

As a quick addendum, years later as bishop of Lansing, he would install the useless Alpha program throughout his diocese to try and hype up the Faith and make "joyful missionary disciples" throughout his territory. Predictably, it bombed, largely because it's not actually Catholic. He lamented its failure in a letter to his clergy a couple of years after it proved futile.

So now, here he is on Twitter, softly telling his few followers what they already know: that the baby in the womb is actually a human baby and science backs it up. Wow! What an insight. Basically, Boyea is a weak, little old man reduced to sending out correct but meaningless tweets. And Jennifer Granholm is Biden's energy secretary, a child-killing Catholic rewarded by another child-killing Catholic. Granholm owns Boyea. She did back then, and she does now — just as Pelosi owns Cordileone.

And somewhere out in Twitterland, a few bishops tweet out a few inconsequential blurbs into cyberspace. Maybe it's to soothe their troubled consciences. They tweet or put out a meaningless YouTube video or have their overpaid communications director issue a statement nobody will read. But when it comes to doing something, they are simply ill-equipped.

It takes courage and integrity to stand up in the face of this monstrous evil of child-killing, accompanied by sacrilege against the Body and Blood of Our Blessed Lord, and do the right thing. But as the old philosophical maxim goes, you cannot give what you do not have. These men have no integrity. They have no courage. That's precisely how they got into the office of bishop.

So, sitting back now and expecting a sudden flood of integrity and courage from a crowd that possesses neither is fool's gold. And, no, praying for them to suddenly develop said virtues is not what we have to do. God cannot and will not override their free wills. These men have been willing cooperators in the Culture of Death. Not just Boyea, but across the board.

Madison, Wisconsin bishop Donald Hying, another coward, recently tweeted a response to pro-abort testimony calling abortion "a blessing." Good for him, but when notable priest Fr. Richard Heilman started talking about the political dangers of the Culture of Death, Hying slapped him down, ordering him to shut up about what Hying deemed "politics."

Of course, you can't have any priests actually laying out the case that the Democrats are communists and the Party of Death. The do-nothing bishops will manage this whole "affair" on their little-viewed social media accounts, thank you very much. That way, they can't be accused of saying nothing. They get to hold up the occasional tweet to insulted Catholics, betrayed by the leadership of this feckless bunch, and say, "Look, we really do care and are doing something."

No, they don't, and no, they aren't. They are, rather, navigating their way through what they perceive to be a political minefield, terrified to advance in any direction. On the one hand, they are the slaves of the likes of Cupich of Chicago, scared that if they go too far, he'll have them removed with one call to the Vatican. Likewise, they don't dare upset their Democratic overlords, in league with Cupich and the rest.

But as the chorus of boos from faithful Catholics increases, they realize they must act in some fashion, so a handful have taken to posting meaningless tweets to quiet down the mob of the faithful, while at the same time remaining loyal to Cupich and the rest of the child killers.

This same is true if you scoot over to the diocese of La Crosse where the bishop of Fr. James Altman, William Callahan, still has Fr. Altman on ice, manipulated by Cupich into canning the priest, all while remaining silent as the grave on his other priest, Msgr. Jeffrey Burrill, also known as Msgr. Grindr (for being caught red-handed on a homosexual hookup app, with hundreds and hundreds of "encounters"). But a priest decrying the evil of abortion and politicians being allowed to continue to receive Holy Communion? That priest gets iced.

Don't believe any bishop in America who offers nothing besides tweets and the occasional words about abortion. Sure, in their heart of hearts, they may actually believe it's bad and evil and all that. But words are completely meaningless. They do nothing and ignore St. James the Apostle — who they are a successor of — that faith without works is dead. Their faith is dead. They do not believe. Or at a bare minimum, they do not believe enough.

They have allowed active homosexual clergy into the priesthood, some even having sex with them. They have participated in the cover-up of thousands of victims of homopredation.

Don't believe any bishop in America who offers nothing besides tweets and the occasional words about abortion.

Some have ordained men they knew were accomplices in breaking the seal of confession and decided to keep that quiet as well. They have little to no regard for the sacraments of the teachings of the Church, and we know that by their actions, or lack of them, as well as their fruits. They silence good priests, promote bad ones and do nothing about the dominant evil of our time.

What's truly shocking, however, and is an indicator of their lack of faith, is this: Most of these men are either elderly or pretty dang close. They have barely a few years of earthly life left, and yet they persist in their disbelief. Perhaps they're all foolishly betting that Bp. Barron's idiocy about "a reasonable hope all men are saved" is true.

At this point, the do-nothing crowd had better hope against hope Barron is right, which, of course, he isn't. Tens of millions of souls of aborted children will gather at the judgment seat of these bishops and testify against them. And what will the bishops do? Well, they'll point to their couple of tweets, of course. 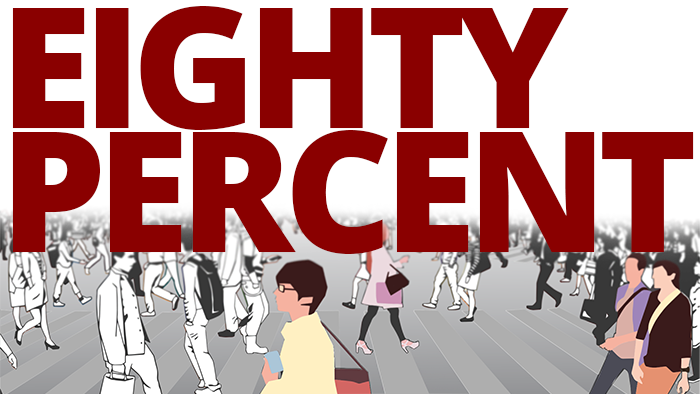 Eighty Percent
And guess whose fault it is?