And going for the win.

With news that Elon Musk has finalized his purchase of Twitter, the cancellation train has screeched to a halt, at least for now. In fact, it's safe to say there is a cold wind blowing over Left land these days. Yet even before the Musk/Twitter deal, the America-first crowd was already gearing up — sidestepping the cancel crazies, doing an end run around them.

Andrew Torba, who founded the social media website Gab back in 2016 and has been a frequent guest on Church Militant had the foresight to see the trainwreck long before it derailed, and built up his platform as a haven for those being silenced by the Marxists. Indeed, here at Church Militant, we did the exact same thing right about the exact same time as Gab, realizing that the Left is all about censoring the truth.

So we have developed our own server network, our own website and our very-own processors and are all but free of the overreach of the tech giants. All of this is being dubbed "the alternate economy," referring to political and theological conservatives tearing away from control by the Left, setting up their own ways of doing business.

It is, of course, a tedious and cumbersome process — but seeing as how "team evil" has no plans of going away, it remains the most viable alternative. It's a balkanization and it's only increasing as more and more conservatives realize they have ceded way too much control to the Left in their day-to-day lives.

The reality of the situation is now becoming apparent for socially conservative America-first lawmakers as well — led by Georgia congresswoman and firebrand Marjorie Taylor Greene, who is among the first to set up her own media platform.

Setting up her own platform is a response to many indignities she has had to suffer as she sticks up for her beliefs in the face of tyrants like Nancy Pelosi. And, to that point, imagine having to get up and go to work each day and deal with the Wicked Witch of the West and the rest of her coven.

Even in the face of what has become expected on the part of Marxists, conservatives still experience moments of what we can call "clarity" when dealing with them up close and personal. MTG says she's willing to endure the constant harassment and berating by the Left, because of what she sees happening to middle America and the American way of life — even down to something as seemingly insignificant as blue jeans.

Tomorrow, as we wrap our interview with MTG, we'll explore her first big encounter with Capitol Hill Marxists, Covid and what she's doing about it — something the U.S. bishops have not demonstrated an ounce of care about.

Again, if you'd like to catch our interview in its entirety, please feel free to click on the attached link. 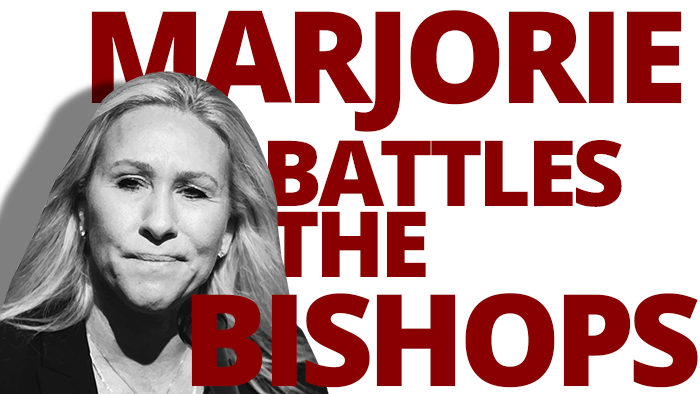