Doing Nothing Is Deadly

Abuse of authority must be challenged.

May 7, 2020  0
Podcast Available for Premium Subscribers

In a 1916 speech supporting prohibition, famed prohibitionist Charles F. Aked said "All the Devil wants of the son of God — to be let alone. That is all that the criminal wants of the law — to be let alone. The sin of doing nothing is the deadliest of all the seven sins. It has been said that for evil men to accomplish their purpose, it is only necessary that good men should do nothing."

Indeed, leave things as they are, the demon says, for in a fallen world it is the nature of such a world that positive energy in favor of the good must be asserted to stem the tide against evil.

In a world that is fallen, evil knows no rest, for the fact of living in a state of fallenness immediately awards the upper hand to the demon who would advance that natural fallen state, and drive mankind to further depths. Therefore, silence becomes a great weapon in the hands of the demon, even convincing fallen men that silence is golden, prudential and dare we say it, charitable.

But it does not stop there. If silence in the face of evil is golden, then to call out the evil must be condemned, even labeled damnable. It is only in the darkness of silence that evil is able to advance.

In the Catholic world, that same silence is fully in control with regard to authentic journalism applied to the Church. In a word, it is hated.

In his 1937 encyclical Divini Redemptoris, condemning worldwide communism, Pope Pius XI recognized that it has made such inroads into western civilization by the silence of the press:

A ... powerful factor in the diffusion of communism is the conspiracy of silence on the part of a large section of the non-Catholic press of the world. We say conspiracy, because it is impossible otherwise to explain how a press usually so eager to exploit even the little daily incidents of life has been able to remain silent for so long about the horrors perpetrated in Russia ... .

But what about the horrors perpetrated in the Church in our own day, and recent living memory? And so enter the discussion of journalism, Catholic-style. The reality of a free press is a recent novelty in the Church, with emphasis on "free," meaning independent.

Indeed, the whole notion of a free press is relatively new on the stage of the world itself. Only in the past couple centuries or so has such a notion even existed. In Catholic circles, to the extent there had been press at all, it had served largely as little else than an organ to help spread the Faith at the control and service of the hierarchy.

But then, when affairs headed south in the last century in the arena of orthodoxy, much of that "press" became weaponized by the Marxists who had infiltrated the Church, or at least their ideology. Religious orders and their printing presses gave way to heterodoxy and the promotion of error. This gave rise to a "press," as far as the use of that term goes, begun, organized and run by faithful laity.

But lacking official blessing by bishops, it remained a wholesome yet small effort. And when the leading originator, The Wanderer, began reporting on evils emerging within the hierarchy, the game was on. The "resistance press," we could call it, began emerging and immediately drew the ire of bishops. That press corps has grown steadily over the following decades, and Church Militant is an heir to the work of those first "resisters."

We all owe them an enormous debt of gratitude, especially The Wanderer — the first and oldest Catholic paper in continuous production in the country, established just after the Civil War, in 1867. It was so "Catholic" that both Adolph Hitler and Joseph Stalin publicly decried it, Hitler even going so far as to ban the sale of its German-language editions in his Third Reich.

Authentic Catholic journalism has a tinge of contradiction to it, with the Faith proposing we view people and their comments in the best or most charitable light as possible. But the journalistic mind cannot do that and remain authentically journalistic.

The journalist must always consider that power and authority are powerful temptations in a fallen world and must, therefore, approach authority with a degree of skepticism, a degree of suspicion — not for its own sake, but rather looking out for it being abused by the holder of the office. This, of course, is true, or is at least supposed to be in the secular arena as well, but that mask dropped long ago. Secular journalism has become a tool of Marxism.

Pope Pius said perhaps more than he knew when he condemned the silence of the non-Catholic press regarding communism. The secular press, at least many members of it, were already secret commies or commie sympathizers, as they are today.

But in the Catholic world, that same silence is fully in control with regard to authentic journalism applied to the Church. In a word, it is hated. Insults like "tabloid journalism" and "yellow journalism" are tossed about by various factions to distract from the content by smearing the messengers.

Establishment clergy give homilies saying to avoid such sites, thus betraying their desire to keep all things quiet and concealed, feigning care for souls — please!

It's too bad an authentic — meaning independent — Catholic press wasn't already established when the invasion of homosexual men into the clergy was in full swing. It may have never succeeded in converting the priesthood into a "gay profesison" as the New York Times famously dubbed it. It would also have prevented the destruction of thousands of mostly young males, the loss of billions in legal payouts, and the meltdown of the Church, at least across the nation.

Church Militant, in the past few days, has received an unusually large number of communications saying things like "seminaries are tossing out, or delaying ordination for seminarians who follow Church Militant." Elsewhere, a knight of Columbus was ordered to take down a link to Church Militant on the Council's website because Church Militant is "anti-Catholic." He refused and resigned.

Then there was the questionable homily on Fr. Leonard Mary on EWTN earlier this week — questionable because he wasn't totally clear on just whom he was talking about when he was condemning Catholic "investigative reporting" and "yellow journalism," styling it as tabloid. If he was talking about the National Catholic Reporter — actually condemned — or other liberal rags, fine. But his damning tones did not make clear whom he was launching against.

Certainly, he would not be the first to insinuate that Church Militant is untrustworthy, doing the work of the Devil, causing division, possessing a divisive tone and so forth.

There could not be, in some respects, a more noble Catholic calling in the service of the truth, for in the end, Truth is a person.

Church Militant, as a journalistic endeavor and others exist for one reason — because the institutional Church is too corrupt, period. Too many shepherds cannot be trusted. They are doing the work of the Devil and have miters on their heads to not remove them from the realm of suspicion or being challenged. Not their office mind you — we have more respect for their office than many of them do, in fact. But the men in the office — that's an entirely different story.

For example, where is the long-awaited McCarrick report, revealing decades of homopredator sex abuse, cover-up, conspiracy, stretching over continents with complicit cardinals and clergy that knows no bounds? And that's just for starters. It was Church Militant reporting over the years that revealed the underbelly of homosexuality rampant in the clerical ranks — something we were attacked for for years, until Theodore McCarrick.

It was recent Church Militant reporting that forced the breakaway Catholic group the SSPX to at last admit that they too have allowed and covered up sex abuse for decades and now claim to be setting up an internal commission to deal with it.

Church Militant chased down the lying, cheating Richard Malone, former bishop of Buffalo, helping to drive him from office.

Homosexual priest Robert DeLand in Saginaw Michigan, who would groom vulnerable teenage boys and wait until they were of legal age to attack them — that man is behind bars in part owing to Church Militant's investigations.

Church Militant is the outfit that exposed the evil of the Detroit archdiocese going after an innocent pastor — Fr. Eduard Perrone — literally making up accusations against him out of thin air and releasing the lies to the Associated Press.

We could go on, but you get the idea. The one thing common in all these reports, as well as many others, has been the ferocity of the attacks when the light is shined on foul deeds. The response is anything but Catholic.

Whether it is sexual filth, or financial misdeeds or even theological wickedness like Bp. Robert Barron's assertion that we have a reasonable hope all men are saved, the responses reveal the true nature of those behind them, by their completely all-out-of-proportion acidity.

Yes, the Church is in a woeful mess right now. The abuse of authority has not been sufficiently challenged, not even by so-called Catholic media types. They may fall into the "Catholic celebrity" group, but they are certainly not in any way Catholic journalists. They have no professional training, for the most part, no experience, and in some cases little skill. They use their "media platforms" to advance the cause of their own hobby horses and sometimes dress it up as news. It's not.

News — journalism — is about holding those in authority accountable to the truth, no matter how distasteful or disturbing the facts that come to light may be. There could not be, in some respects, a more noble Catholic calling in the service of the truth, for in the end, Truth is a person. But to resist such efforts, to allow people to wallow in the status quo as it fails them, or even deludes them, is to assist in the advance of evil.

It seems appropriate here to end with where we began: "The sin of doing nothing is the deadliest of all the seven sins. It has been said that for evil men to accomplish their purpose, it is only necessary that good men should do nothing." 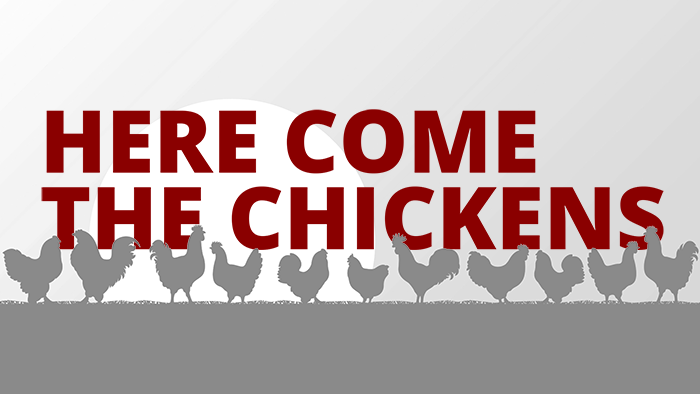 Here Come the Chickens
And there are many, many of them.