Finally does what he should have done.

New York Cdl. Timothy Dolan has, at last, after going on four long years, has suspended the notorious Fr. Peter Miqueli, who stole money from parishes to pay for a drug-fueled lifestyle with a gay-for-pay prostitute, Keith Crist.

Church Militant first brought you this story all the way back in 2015, and we've followed it closely ever since.

At the time, Dolan and his homosexually infested chancery leadership team did everything to avoid this becoming public, sweeping it under the rug, ignoring multiple complaints from parishioners and even lying, insisting that there was no evidence, despite his being given evidence not just supporting but actually proving the claims.

In issuing his decree, Dolan said that Miqueli had been officially warned last month to "avoid any and all persons or situations that could endanger your obligation to perpetual continence or any and all conduct that might cause scandal to the faithful or that would receive publicity in the media."

In suspending Miqueli this past week, Dolan charged Miqueli with "wantonly disobeying" that directive. He strongly advised Miqueli to seek laicization — and if not voluntarily, Dolan appears to say, he will petition Rome to have Miqueli dismissed from the clerical state.

While this is good news for many involved, the least of which include the good people of Miqueli's former parishes who were snubbed and ignored by Dolan multiple times, there are a lot of questions — as usual when you are dealing with this crowd.

First, Dolan had ordered Miqueli, as we said earlier, to do nothing that would bring this to the attention of the media.

That's a very strange order coming from Dolan because it was his incessant, adamant refusal back in 2014 and 2015 to accept the pleadings of parishioners that made this whole thing public to begin with.

They eventually had to file a lawsuit, and the resultant publicity went nationwide and completely dominated the major newspaper front pages in New York for three straight days.

Lurid and salacious details of Miqueli's homosexual practices filled the New York papers as millions of people who knew nothing were soon drowning in scandalous news.

A few days later — only after the New York papers' stories — Miqueli resigned as pastor of St. Frances de Chantal in the Bronx, having a Dolan representative read the letter out loud to the congregation. Dolan himself created this publicity firestorm.

Then, fast forward to the McCarrick news from last summer and the resulting maelstrom. All of a sudden, Dolan and the rest of the New York bishops were under investigation form the New York state attorney general.

Dolan had to pull the publicity stunt of hiring a special investigator to comb through his current files and make sure there were no "bad apples." He announced the move to much fanfare near the end of last year.

But, according to Church Militant sources in the New York archdiocese, it blew up in his face when his investigator came back and said that there were at least a half-dozen priests who had to go immediately.

Dolan deliberately kept that information from the public and had plans to simply get rid of some of the suspect priests by just letting the clock run out on their pastorships and then quietly move them out.

But sources in New York leaked the information of Dolan's plans to Church Militant, and Dolan, along with members of the homoclerical cabal in the chancery, became infuriated.

So the question naturally arises: Is Miqueli gone only now because Dolan got exposed? Why after all these years of denial, lies and deflection, why now dump him?

Miqueli has been on the clerical lam for almost four years. It's hard to believe that Dolan only warned him for the first time last month to remain sexually pure and stay out of the limelight.

It's also hard to believe that, given his notorious behavior for close to 20 years, that this particular case of "wantonly disobeying" the order was actually his first time since the scandal broke.

Look at the timeline. Dolan says he told him three weeks ago not to commit any sexual sins and not to give the media any ammo. Then, a week later, Miqueli does, in fact, do something "wantonly disobedient." Dolan then almost immediately finds out, which is itself a little strange, and then suspends him.

Of course, this entire situation is playing out at the exact time Church Militant exposes insider details of his botched PR plan to keep the result of his own internal investigation out of the public eye.

And as a reminder, that investigation cost New York Catholics a cool half-million bucks.

State investigators are closing in. Various federal investigations are underway that Dolan doesn't even know about — yet. He decides to keep his own findings squirreled away to pull a fast one on the laity.

Wouldn't the archdiocese and Cdl. Dolan just have a cow if Church Militant just happened to secure an on-camera interview with Miqueli, who now has nothing to lose, Your Eminence? 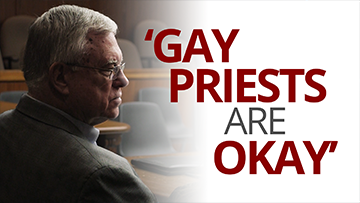 'Gay Priests Are Okay'
As long as it isn't minors.