Before we begin, just a reminder: If you are able, please join us for our novena to the Holy Spirit for justice in our nation and Church (followed immediately by the Holy Rosary) every workday morning at 8 a.m. ET, right here on Church Militant.

Dominion Voting Systems is certainly making a lot of news these days, understandably. The question that arises is not if electronic voting systems like Dominion are subject to hacking and switching votes and so forth, but if it can all be proven in a court of law in enough time to show that it did happen.

The question of "if" is already answered. The state of Texas out and out rejected Dominion precisely because it was not secure. Likewise, Democratic senators (including Amy Klobuchar and Elizabeth Warren) wrote a letter in 2019 raising the same concerns.

Should we be concerned about all this? Is it possible? Before the election, NBC News and PBS each did segments on computer hacking and election integrity, raising the very same concerns. So "yes" is the answer to the very first question.

Likewise, as we look across the political landscape (without seeing whatever evidence Trump attorney Sidney Powell is going to put forward in detail in court), it would certainly seem like there is enough to at least proceed. Too many irregularities — a flood of them, in fact — have emerged: Overvoting; late-night dumps; ballots being changed, thrown out, not counted, manufactured and so forth.

Then add-on to all of that what sure looks like rigging the vote count through software, and it all adds up to what looks like a huge fraud designed to get Trump out of office.

Do the right thing, and Antifa will burn down the country.

If this all turns out to be true — and right now, it doesn't look false, despite what the Marxist media say — then consider: (1) Either some court (e.g., the Supreme Court) has to overthrow the election results in at least some states owing to fraud and then the whole thing goes to the U.S. House of Representatives, or (2) Some judges or justices don't have the courage to do the right thing (we've seen that sequel too many times to shake a stick at), and we have an illegitimate president who nonetheless will still wield all the power of the presidency.

It will matter little that more than 40% of the population refuses to accept him. He will still have the power, and unlike the last four years where all the powerful weapons of the Marxist Left in the deep state were trained on Trump, the good guys don't have that power.

So that's what we're staring at right now. Do the right thing, and Antifa will burn down the country. Or do the wrong thing, one way or another, and let America come to an end. Against all this backdrop, notice the name of the company at the center of it all: Dominion.

Kind of a strange name for a company supplying voting machines, software and accurate results in supposedly free and fair elections. Republics aren't really referred to as "dominions." Neither are democratic republics. Dominion is an epithet generally reserved for reference to kingdoms: Nations with rulers and monarchs — the sort of places where elections don't really happen.

The root word for dominion refers to "lord" — dominus in Latin. In Spanish, Sunday is Domingo, the Lord's day. Dominions don't have elections. They have a supreme ruler. That's the point. God is Lord of all; yet in an effort to ape Him, Satan takes on some characteristics of being a lord or ruler. Indeed, he does have a kingdom, and he has subjects under him.

Since what is playing out here in this election aftermath is a spiritual war, it remains helpful to always go back to that lens through which to view everything. While far from perfect, the American side in this conflict is willing to admit there is a God and that life must be subject to that understanding.

Notice how the American side in this conflict against Marxism has taken to calling themselves "patriots." Never forget that the root word for patriotism is patria, which is Latin for father[land] — as in God the Father.

This war is good vs. evil (on a grand scale), between those who accept the fatherhood of God and all that flows from that and those who reject it, who are offspring of the serpent.

What flows from the fatherhood of God is the universe ordered correctly.

What flows from the fatherhood of God is the universe ordered correctly. Next week, Catholics will enter into Advent and begin singing O Come Emmanuel. One of the verses has the line, "O come now Spirit from on high, Who orders all things mightily."

But opposed to that order is the disorder and chaos of the dominion of Satan, who seeks to destroy what God has ordered. He is adverse to all that is holy; hence, his name, Satan, means "the adversary." So what flows from all this is a kingdom of opposites — where truth is opposed by lies, order by disorder, and peace by chaos.

So looking through this lens, let's go back to the election and look at what is going on: Lies, disorder and chaos, all stemming from an outfit called Dominion. According to reports, one of Dominion's key selling features is the ability to flip votes. If that is true, and Team Trump says it has sworn affidavits testifying to that very thing, then that would be truly revealing.

Dominion's entire reason for being was/is to cheat and lie, just like Satan's dominion. Spiritual war is always a conflict between two kingdoms, two dominions. One is true, the other is fake. And everything associated with the other is fake: Its news, its politics, its philosophy. 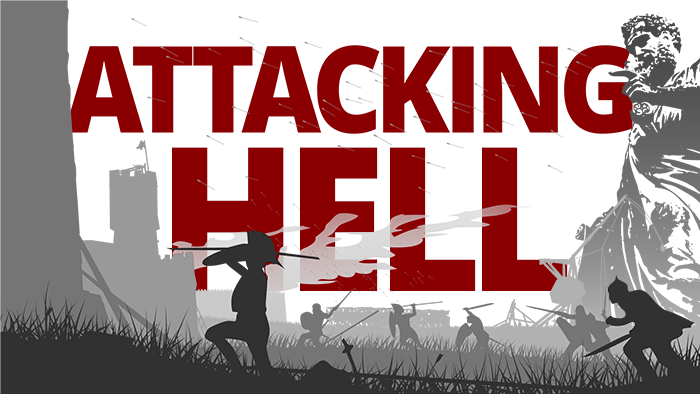 Attacking Hell
Your path to salvation.