Could Heaven be intervening directly in the election?

The United States is moving from perilous times to life-threatening times — and is in deadly times if you have the "misfortune" of still being in the womb. This election is a spiritual war, or rather part of the larger spiritual war that is always going on in the world behind the scenes. But the intensity of the spiritual war has reached such a pitch that it is now spilling over visibly into the material world.

Killary, as you have probably heard, called half of Trump's supporters "a basket of deplorables." What is getting less play, because the word "deplorable" has stolen the headline, is that she also said, "Some of those folks — they are irredeemable, but thankfully they are not America."

You need to pay attention to clues like that — like last year when she said religions would have to change their views, meaning teachings. She said then that those religious views were un-American. Obama hinted at the same theme in 2008 on the campaign trail when he accused Republican voters of "clinging to their guns or religion." Notice the "religion" theme constantly being appealed to from a negative standpoint.

And the Democratic machinery has a method to its madness.  It has developed a mantra that we hear more and more pitting religion against American ideals. By filling up the federal bench with agnostic or practical atheist judges for the past 40 years — with the the help, by the way, of a rollover Republican senate — the Democratic leadership has managed to almost completely redefine what is American and what is not. Now, having rolled out the "New America" as a pro-sodomy, pro-death, pro-transgender bathrooms culture, it can now turn its guns to "religion" and accuse faithful Catholics and others of being anti-American.

Trump has come along and exposed the narrative, attacked it at its root, saying America has been weakened and transformed into something other than America and has fashioned his entire bid for the White House on that theme: "Make America Great Again."

Hillary is a self-declared enemy of conservative or orthodox traditional Christianity, and Trump, by campaigning on the "Restore America" theme, has unwittingly and perhaps without even realizing it found himself on the side of supporting the Church. It's like a battle between a type of Diocletian and another Constantine. A direct battle between the two never happened, but close enough for an analogy.

Obviously, Clinton is Diocletian — a bloodthirsty, self-professed enemy of the Church who needs authentic Christianity out of her way to complete her desired refashioning of America. Diocletian's persecutions were the order of the day. And to Trump has fallen the role (whether he yet realizes it or not) of Constantine, the ambitious man who wanted to be emperor of Rome, but who was ignorant of the fact that Heaven would step in for him for Heaven's own reasons. God had additional plans for him once he was undisputed emperor.

Constantine engaged in one final, set-piece battle in 312 AD for control of the empire with Emperor Maxentius at the Milvian Bridge just to the north of Rome. We actually produced an episode of "The Vortex" from the Milvian Bridge during a visit to Rome in 2011. Constantine faced a formidable foe in his rival Maxentius. Maxentius had all the benefits of the power of Rome at his back: the entire Roman establishment, money, food, resources, an army that was the envy of the world. And Constantine had his ambition and know-how.

But there was no way, no real final path to victory for him. The forces aligned against him were too great. And then Heaven intervened with the famous vision or dream on the night before the battle whereby Jesus Christ told Constantine to bear His standard of the Chi-Ros on his army, and he would win the day. "In hoc signo vinces" — "In this sign you shall conquer." And conquer he did.

Maxentius made some of the most tactical blunders a commander could make, taking up positions on the opposite side of the Tiber from Rome and allowing his army no effective retreat across the Tiber and back to Rome if things went south. And went south they did, from the first draw of the swords. Constantine's cavalry was successful in its initial attack against Maxentius' 100,000-strong army, and then Constantine's infantry wiped them out. Maxentius drowned in the Tiber retreating to Rome with many of his troops.

Constantine entered Rome the undisputed emperor, ended the persecution against the Church, and a year later elevated the Church to the level of preferred religion of the empire. Constantine's mother, St. Helena, discovered the True Cross in Jerusalem a few years later as well as many other relics of the Passion of Our Lord, brought them back to Rome, and a new era of history — salvation history — was inaugurated.

Whether Donald Trump could unwittingly be another Constantine, in at least holding back the enemies of the Church, who knows? Heaven has certainly used other earthly rulers in the past for Heaven's end — good and bad rulers.

Millions of Catholics  all over America are in the middle of a 54-day Rosary novena for a good outcome to the election, past the midway point, in fact. Since the start of the novena, almost to the day, Diocletian's fortunes have tumbled and Constantine's have risen, drawing near parity. Could the Rosary be the sign of conquering in this case? If Heaven wills it, yes. But Constantine has to respond correctly.

This battle is for control of the American empire. It will be either a persecution or turning back of the evil. 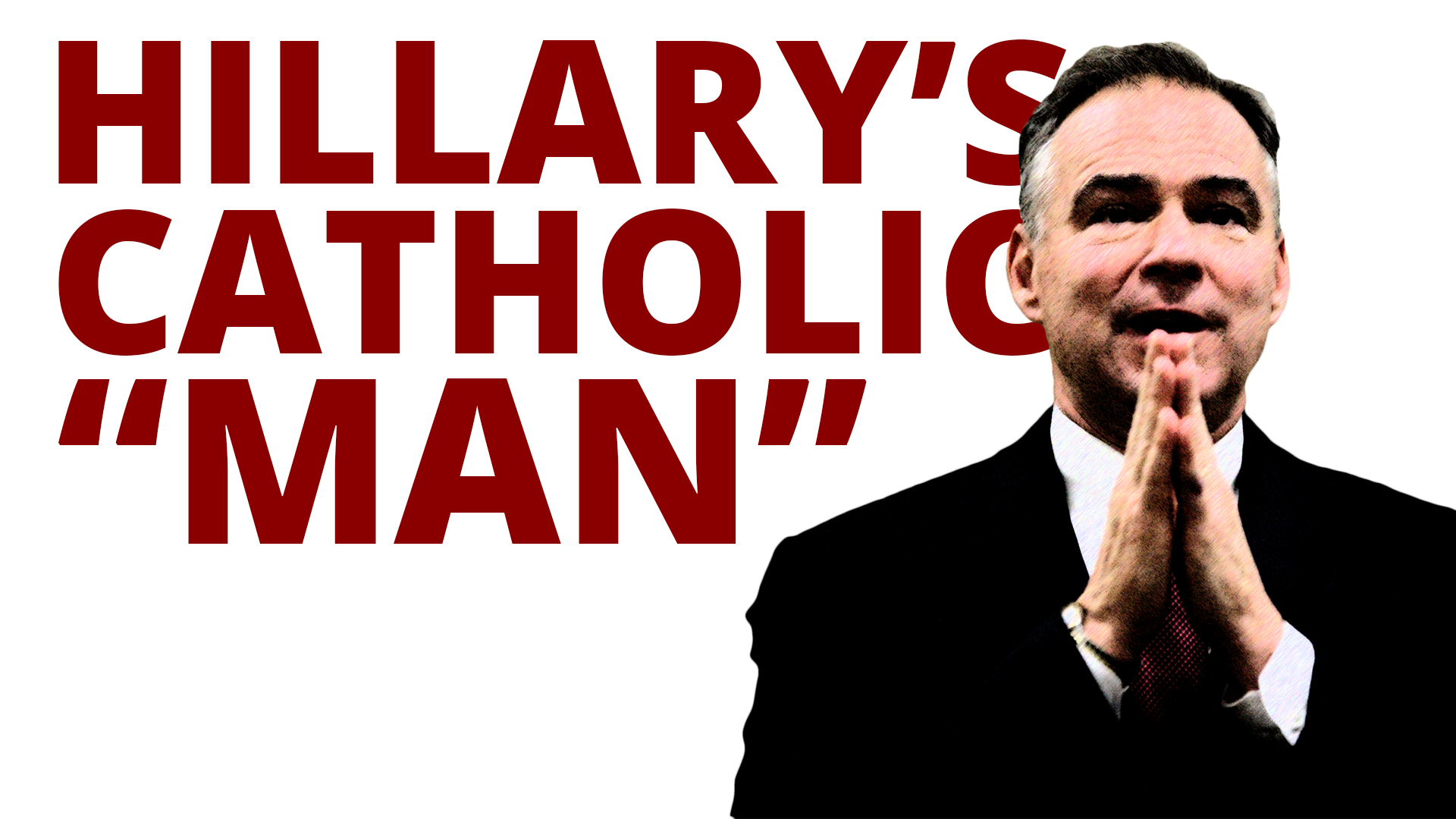 Hillary's Catholic 'Man'
Hillary's man, Tim Kaine, has worked to undermine the Pope and the Vatican.