Don’t Let the Door Hit You

On the way out.

Last week, Church Militant conducted a poll of faithful Catholics about their personal experiences regarding RCIA — the Rite of Christian Initiation for Adults. First, the poll isn't formal with a margin of error and all that. Nonetheless, it did have a very good response rate of almost 2,400 people.

So here are the findings. First, 82% said they knew at least one person who had come into the Catholic Church through RCIA, and more than half of them said they knew four or more who had done the RCIA program and become Catholic. So far, so good — loads of new Catholics — but that's where the good news screeches to a halt.

That is a blinding failure of catechesis. And when you consider that this is the official, Church-sanctioned, usual way — complete with the local bishop's blessing — of bringing new members into the Church, it's even worse. In fact, it's horrendous.

But not only are Church leaders having a serious problem attracting and keeping new converts, they are also having a lot of difficulty retaining those already baptized. They are leaving faster than they can be replenished. In business terms, the Church is in a deficit-spending mode.

Given that hard-edged reality, you would think the bishops would be deeply concerned and scrambling about to stop the outflow — but no. It appears the response is more like telling those leaving, "Don't let the door hit you on the way out." Given the corruption that has befallen the hierarchy as a whole, none of this can be surprising.

Why would anyone looking for supernatural faith and what it has to offer be attracted to the Church in these days? Or, better stated, why would anyone look at the institutional Church the way it is presented and feel any attraction? Bishops run money-making organizations while betraying the teachings, either directly or indirectly.

They persecute good priests, promote wicked ones and are intent on further emasculating the priesthood, if that's even possible. They are intent on "managing the decline" (that's what they call it behind closed doors). About 10 years ago, when Church Militant began paying close attention to the numbers, we predicted that within 5–10 years you would begin to see an actual drop, in real terms, of U.S. Catholics.

Catholic marriages have dropped 70% since 1970, more than suggesting that the future of the Catholic family is pretty bleak.

Well, it's now been 10 years, and that has come to pass. After reaching a high of 81 million self-identified Catholics 15 years ago in 2005, the number has dropped to just 72 million. That's a falling off of 12% in just 15 years. Soon, this decline will no longer be "manageable."

The decline is fast becoming a catastrophe. No matter which demographic marker you look at, the picture is the same. For example, the Church in the United States had more parishes when John F. Kennedy was president then it has now.

And expect that number to only get worse, as diocese after diocese is in the process of slashing parishes left, right and center. Not until the closures are complete will a diocese typically update its numbers with a recount, but when the dust settles, it will not be good.

The Faith used to be spread through three major avenues — the family, the parish and the school. In many situations, those are just no longer viable options. Catholic marriages have dropped 70% since 1970, more than suggesting that the future of the Catholic family is pretty bleak.

Parishes we have covered, and when all the dust has settled, its a safe bet (given the lack of Catholic families to fill them) that the current 16,000+ parishes will be well below 10,000 by 2030.

As for schools, most of them (whether grammar, middle school, high school or college) haven't taught the Faith in decades. In fact, a strong argument could be made that the corruption of the teaching orders was the precipitating factor in all of this.

The laity, in many ways, is now in a situation where they will have to begin to fend for themselves. Fortunately, the internet has stepped in to fill some of the vacuum created by the collapse of the institutional and cultural structures.

Church Militant is humbled and excited to say that we were one of the very first faithful Catholic apostolates to recognize this and respond to the coming storm, and we responded with video — videos which have been viewed going on 60 million times and counting, blessed be God.

We've been in this work on the internet, bringing solid teaching in video format to millions, longer than anyone else in the Catholic world. Back in 2008, for example, you couldn't post a video on YouTube longer than 10 minutes, as incredible as that sounds. That was just 12 short years ago.

The technology and bandwidth just wasn't there to support it. Nonetheless, we took 10-minute clips from our flag show — The One True Faith — and began loading them onto the platform. One of our mentors, Fr. Pablo Straub (God rest his soul) said to us, as you may know, "You must bring Christ to the internet." And that was essentially before the internet was actually video-friendly.

Connection speeds were painfully slow; people's computers were slow. It took forever to upload for us and to download for you. But we kept at it, confident that as we trudged through all this, things would get better technologically — which of course they did.

Over many years, we have produced thousands of episodes of catechesis, apologetics, Church history and historical investigations into Freemasonry, homosexuality, contraception and all the betrayals of the Church from within.

The list is so long, we often forget. But we want to invite you to become a Premium member of Church Militant and begin diving into either the Faith or back into the Faith.

It's just $10 a month and is well worth the investment, especially given the shrinking of the Church. With oftentimes dodgy preaching, horrible catechesis, failing RCIA and religiously failing schools, there is no better time to turn to an authentic source for Catholic truth.

Church Militant was the first Catholic apostolate to do what we do, and now others are following suit — which we regard as a compliment. Thanks, guys. And while the Church in America has been officially shrinking for years, Church Militant has been growing and growing, with many Catholics aware that something is seriously wrong and turning to new sources.

We are happy to have been blessed to stand in this space first. We are committed to being used to save souls. Nothing else we do here is more important. And given the times, there couldn't be a more important time than now to hunker down and embrace the Faith.

So please, sign up for a Premium membership today and begin exploring our Premium programming: We haven't left a Catholic stone unturned. And we keep adding to it, practically daily.

Thank you in advance for your support, and remember, we'll hold the door open for you to come in, not let it hit you on the way out. 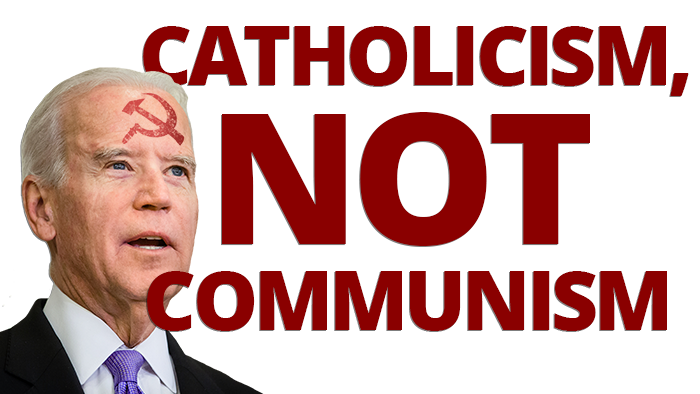 Catholicism, Not Communism
God vs. Anti-God.