‘Enemies’ of the Pope

If you needed any proof that the swamp establishment is more than a little concerned with, first the Catholic vote and second, the influence outfits like Church Militant might have over it, look no further than a few articles that were published by the Marxist Left this weekend. The first one popped up in the Jesuit heretical online rag, America.

In this particular piece, the author Mike Lewis laments the division in the Church and how much the likes of Church Militant are responsible for it. His piece is entitled "Pope Francis' Critics Are Dividing the Church and Families — Including Mine."

In the piece, he cries over the divide that has arisen in the wake of Pope Francis' ascent to the throne of St. Peter and lays all current division at the feet of those who oppose him. He even goes on about how his own dying mother (God rest her soul) had become very suspicious of the pope for his agenda.

He says in particular, "Well-known Catholic apologists who openly encourage opposition to Pope Francis and the bishops — including extreme voices like Michael Voris of Church Militant ... have wildly popular multimedia platforms and go largely unchallenged by Church leaders." That last part is flat-out wrong. The liberal, Marxist-bishop crowd (along with many of their fellow sycophant, cowardly bishops) never miss a chance to tear into us.

Heck, Bp. Barron had just concluded a conference call a number of days earlier about how to deal with the faithful Catholic peasant online uprising — and America rag was one of the participants. So either Lewis was lying or uninformed. Maybe both. He follows the party line of the modernist Church of Nice of trying to paint opposition to the decades-long destruction of the Faith from within the Church as some recent opposition to Pope Francis and nothing more.

You have the Serpent directing your efforts. We have St. Michael and the Queen of Heaven directing ours.

In that, he is lying. For the record, Mr. Lewis, Church Militant was decrying the filth of errant or gay or both types of bishops long before Pope Francis showed up. Watch any of our hundreds of Vortex episodes between 2009 and 2013. The fact that the sex abuse cover-ups and continuing appointments of bad bishops by essentially Cdl. Blase Cupich here in the United States is just that — a continuation of what we've been saying for years before Francis stepped onto the loggia.

But there is a method to the madness here by the likes of Lewis (as well as Barron) and many other bishops. In fact, in private discussions with other apostolates over the past year or so, I told them the modernist, Democrat-loving Church establishment is going to try and portray all of us as "enemies of the pope" so that what we say can be automatically discounted once the Catholic vote starts being fought for.

That warning and strategy is now coming to fruition and being employed. Lewis is lying through his teeth when he tries to trot that out. Church Militant is not an enemy of the pope. Unlike other outfits — who need to speak for themselves on this — we have never said he's not the real pope, or he's a heretic, or Benedict is still the secret real pope, or the conclave to elect Bergoglio was rigged.

We've never said anything like this for two reasons: No member of the laity can sit in judgment over a pope. Only God judges the pope. And then when the man who was pope dies and is no longer pope, a future pope can judge him and declare him an anti-pope. If others want to venture into those waters ahead of a future pope, you go right ahead, but I would greatly caution you spiritually.

Secondly, if the very men who were in the conclave — the likes of Mueller, Burke, Sarah and others — have publicly declared him pope and still do, and they have never said the conclave was rigged and Benedict was forced out and all those conclave conspiracy theories, then lay people better guard their speech.

So, as to Lewis' argument that Church Militant is somehow in the vanguard of opposition to the pope, try again. What we are (and have been) in the vanguard of is fighting the destruction of the Faith by modernist forces in the Church that, on a political scale, embrace Marxism, globalism and all its inherent evils dressed up as goods.

There is nothing — repeat nothing — good about Marxism, globalism or modernism. Marxism has cost the lives of hundreds of millions and modernism has cost the souls of, most likely, more. Lewis is a modernist Catholic — his bio at the end of his piece says he worked for the Catholic Climate Covenant, a hogwash outfit trying to advance globalism by tying fake manmade climate-change to theology and so reengineer Church teaching, deflecting from actual dogmas and substituting them with more social-justice-warrior glop.

But while Lewis' little whining and pining piece about division in the Church was sitting in the back rooms of the Church-only world, it was just that — isolated to a small discussion among those who can argue these points. But then, miraculously (and of course, "coincidentally"), a follow-up story on it suddenly appears the next day in, drum roll please, the Daily Beast (appropriately named, theologically speaking).

This piece was penned by Barbie Latza Nadeau, who also, of course, contributes to CNN as well as Newsweek. Seeing the connections here? Faithful Catholics who speak up and challenge the Marxist narrative in the Church have drawn the eye of Sauron. In her useless screed entitled "This Secret Society of Priests Still Won't Recognize Pope Francis," Nadeau makes a failing effort to tie us to this "secret society," whoever they are.

They have wrecked the Liturgy, the devotional life, the seminaries, education — in fact, you can't come up with one single area these theological-modernist perverts have not disfigured beyond belief.

She essentially cut and pasted Lewis' idiocy, naming us as "popular anti-Francis voices that seek to push the opposition to this pope, including Michael Voris of Church Militant." Again, with all the savvy of an out-of-control, over-sized windmill, she as well as Lewis simply ignore (or lie) about what Church Militant has been about for years before Pope Francis arrived on the scene.

And for the record, as long as gay, Marxist, globalist bishops are in place, we will be about it all after Pope Francis has departed the scene. It ain't about Francis (as I have privately counseled numerous well-known Catholics online who have trained their guns on Francis).

One day Francis is going to be gone. Then what? Are you going to start your caterwauling against Pope Francis II? The problem is the swamp that keeps producing crooked bishops who have no supernatural faith and abuse anything and everything they can get their grubby, little Judas fingers on.

They have wrecked the Liturgy, the devotional life, the seminaries, education — in fact, you can't come up with one single area these theological-modernist perverts have not disfigured beyond belief. Not only do they clam up about the biggest evil engulfing the world right now — abortion of hundreds of millions brought to you by the sexual revolution of the Marxists — many of them are actively gay or supportive of it.

The current cardinal archbishop of Newark, New Jersey, Joseph Tobin used to say the gay Masses for Dignity here in Detroit when he was a lonely little Redemptorist being promoted up the ladder to increase the destruction. James Martin's addressing of the Democratic National Convention is perfect casting.

The Democrats don't believe in God, and neither does James Martin. Not the God. Martin is a tool of the Devil, and the Devil is using him at every turn. But the Martin invocation is fitting because it shows exactly what we have been talking about here at Church Militant. It's that foldover, that crossover between the world of Marxist theology and Marxist politics that Church Militant has been explaining to faithful Catholics for more than two years now.

You cannot escape the politics of all this. A number of supporters have contacted us over these many months and asked why we spend so much time on politics. James Martin — homoheretic extraordinaire — is going to be standing before a crowd of bloodthirsty, child-killing, race-baiting, sodomy-marriage, America-hating Democrats and giving them the very thin appearance of having something to do with the work of God.

How do you imagine that came to pass? Because, behind the scenes, the political and theological Marxists have married and joined common cause in overthrowing the Church and Her teachings. That's a multi-pronged strategy — one prong of which is to create a false narrative around Church Militant that we are enemies of the pope. Untrue.

We are loyal sons of the Church and always will be. In fact, unlike the Martins of the world (and his supporting bishops, like Robert Barron, Tobin and Cupich), we are keenly aware that our eternal salvation depends precisely — rests directly — on what we do here. The truth must be declared regardless of what others say, even when those others are phony Catholics hiding behind the corporal works of mercy as well as their collars and miters.

You have the Serpent directing your efforts. We have St. Michael and the Queen of Heaven directing ours. 'Nuff said. 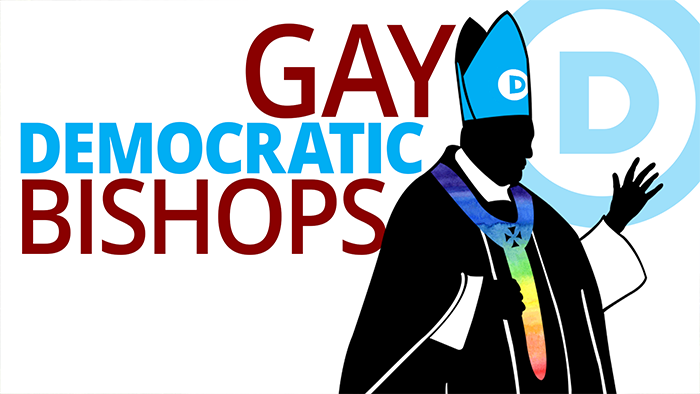