We must call out their lies.

May 3, 2019  0
Podcast Available for Premium Subscribers

I'm Michael Voris coming to you from Jerusalem on our final day in the Holy Land as we wrap up production from here on our documentary on the Eucharist — and quickly, because so many have asked, you can preorder a copy of the final production by just clicking on the provided link.

It was here, in Jerusalem, about a 10-minute walk from where we are right now, that Roman Procurator Pontius Pilate asked his question of Our Lord: What is truth?

Enemies of Christ deny truth, they deny its existence as anything beyond whatever is expedient. Pilate denied it, even having truth Himself standing right in front of him.

Caiaphas denied it when he tore his robes in response to Our Lord's truthful acclamation that He was, in fact, the Messiah and the Son of God.

And so it has gone down through the centuries even to our own day. And it doesn't even matter what given waters the enemies of Christ may swim in — politics, media, religion — all His enemies are liars.

Which of course stands to reason because it was right over there, on the Temple Mount, where Islam's Dome of the Rock now stands, that Our Lord brutalized the Jewish leaders for their rejection of truth in His own person.

He railed at them, naming them as offspring of the serpent and saying they were enemies of the truth because their father was the devil, who is the father of lies.

That is pretty severe language all by itself, but when coming as a judgment pronounced on you by the Son of God, it is a horrifying condemnation. Those who lie, who participate in lying to obscure or deny the truth, are the offspring of the devil.

And this isn't just some historical or even biblical reality rooted in nostalgia or biblical scholarship. This is real today.

Consider CNN with its constant stream of fake news — meaning lies and distortions to get at Donald Trump. And that includes MSNBC, or The New York Times and so forth, the lot of them that want to get at it Him.

And why do they want to get at him? Because he represents to them — rightly or wrongly, a moral America — the head of a political grassroots movement that if successful would completely undo their liberal 1970s America which has ruled the country for nearly half a century. That vision of America was built on lies.

Roe v. Wade was built on the lie that Jane Roe, whose real name was Norma McCorvey, was gang raped by black men. Only decades later did it come out that that was a lie invented by Roe lawyer Sarah Weddington.

Weddington recently sat next to Andrew Cuomo as he signed the most wide-ranging abortion law in world history into effect earlier this year — more lies.

Joe Biden's entire political career is built on lies — perhaps the biggest one coming to light is he is a creeper, not just friendly "Uncle Joe."

He has manhandled so many women in public and done creepy things, like smelling their hair, that he has earned the nickname "The Handyman."

Yet, the hypocrisy of the Left in giving him a pass because he supports child slaughter is revolting — revolting, but telling. They are willing to sacrifice some of their pretended sacred principles in order to keep abortion the sacrament they have raised it to.

The horror of what happened in Sri Lanka on Easter was dutifully reported by the fake news corrupt media as being the fault of "religious extremists" — oh yeah, which religion? To simply pin it on "religious" extremists, condemns all religions.

Why would the media not report the full truth of this, especially when they know it. Because it's better for them to lie by omission if they want to keep up the pretense that Islam is the religion of peace.

They need to keep that narrative going so they can use it against Christianity in general and Catholicism in particular.

The Left — the media, politicians, elitists and so forth — are all engaged heavily in lies because they want to bring about a new order for the world where Jesus Christ is excluded from it.

Islam is based on a lie, Freemasons lie, socialists and Marxists lie, the media lies, Democrats lie, Planned Parenthood lies, all of them enemies of Christ because He is the truth, and they reject truth and the world and civilization created in the West by His Catholic Church after the fall of the Roman Empire.

Pilate, a representative of that empire, you might say got this whole ball rolling, this denial and rejection of truth for the sake of political expediency. It happened right over there, on the Temple Mount the first time, and as we know, it wouldn't be the last.

Those dedicated to Christ say the truth. You cannot love Christ and not also love the truth, for He is the truth. Truth is sometimes hard to hear. Dealing with its consequences is often hard to bear.

But if you want to spend eternity with truth, you better start living in correct association with Him here on earth. Call out lies. Call out falsehoods. Do it every time you encounter them.

Calling out the enemies of Christ is really, after all, only calling out their father, the devil. That's what children of the light do. They attack the darkness.

Ending our time here in the land where Our Lord instituted the sacrament of His body and blood, for our whole crew, and Church Militant supporters who made this trip possible for the production of our documentary on the Eucharist, this is Michael Voris. 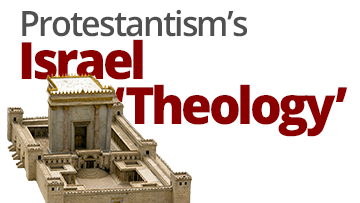