It needs to be blown away.

These are days where everything is being revealed. Thank God, seriously. Thank God. For decades, the Marxists in the media and the Church have been able to hide out under sweet-sounding platitudes uttered to fool people.

Perhaps the premier example of that in the Marxist crowd in the Church is Cdl. Joseph Bernardin's idiotic and evil "seamless garment" approach to life issues. First — about Bernardin — recall that he was one of the leading members of the Church in America's gay mafia.

He's held up by "Catholic" Marxists as a hero to the poor, the downtrodden, etc. He was, in reality, a pro-gay bishop who was credibly accused by a victim of participating in the rape of a child as part of a Satanic ritual.

The victim reported his case to the archdiocese of Chicago, the papal nuncio, the Vatican's Congregation for Bishops and even the papal household. Acknowledgments of the reports being received are voluminous, as Church Militant reported earlier.

Nothing happened: There was no investigation, no procedural inquiry — nothing. With the exception of acknowledging receipt of the charges, no one contacted the victim.

Likewise, Theodore McCarrick's main victim, James Grein, revealed to Church Militant that Bernardin had also assaulted him when Grein was 19. Then there was a raft of charges against Bernardin from former seminarians for homosexual predation.

James Grein revealed to Church Militant that Cdl. Bernardin had also assaulted him when Grein was 19.

Once again, why would all these stories be circulating, as well as a number of others? Bernardin is a hero only to Marxist-minded "Catholics" — apologies to faithful Catholics.

He designated a specific parish in Chicago, Resurrection Parish, to be the "gay parish," and appointed an active homosexual priest with a gay-porn problem to be the pastor. For the record, that priest was discovered dead, hooked up to a sex machine in the rectory — something the archdiocese hushed up and even lied about.

Understand, you are not dealing with honest people here. And given the fact that they are ordained and engage in all this, they are evil. So to appeal to such a man's thoughts on the "life issues" is disingenuous.

Bernardin was a pervert who supported perversion, promoted perverts and protected perverts. Period. So when he starts propounding his smoke screen of the "seamless garment" garbage, it's not surprising that it was only his fellow travelers in the Church who cheered him.

For clarity, the seamless garment is a wicked theory that all life issues matter more or less the same. It demolishes the Catholic-minded thinking that there are always distinctions that need to be made.

Of course there are many issues that affect people's lives! But nothing "affects" your life more than having it taken from you by an abortionist. But Bernardin and his ilk (fellow gay and wicked clergy) don't think that distinction matters. They just lump all issues that impact people's lives into the same bucket as if they are equal, which of course they are not.

So various members of the hierarchy, taking their lead from the Satanic homosexual cardinal's screed about the "seamless garment," are now busy trying to create a smokescreen about Trump. They are claiming he's not really pro-life — not according to Bernardin's definition of what is "pro-life."

But of course, that's more idiocy from some of the men in miters who have an agenda to dump Trump — regardless of how much they have to deceive to do it. While trashing Trump (an actual pro-life president), they need to simply overlook and not tell you about the following:

But see, none of this counts to the abortion-nonchalant bishops and phony Catholic groups because they see abortion as no worse than not having a job. And that isn't an exaggeration. Cardinal Cupich of Chicago, heir to Bernardin, said that exact same thing.

The seamless garment is a wicked theory that all life issues matter more or less the same.

While commerce in the remains of defenseless children is particularly repulsive, we should be no less appalled by the indifference toward the thousands of people who die daily for lack of decent medical care; who are denied rights by a broken immigration system and by racism; who suffer in hunger, joblessness and want; who pay the price of violence in gun-saturated neighborhoods; or who are executed by the state in the name of justice.

Note the key phrase in there the snake uses to equate abortion with everything else, specifically, "no less appalled." We shouldn't be any less appalled by a dude who doesn't have a job — almost always temporary — compared to a chopped-up, murdered baby having his pieces sold.

Yeah — in precisely what diabolical algorithm are those two things equal, even remotely? But see, when the Marxist creeps in the Church get to bring in joblessness and climate change and illegal immigration to muddy the waters, they create a smokescreen.

And plenty of phony, heretical Catholics have used that smokescreen, that perversion of beautiful Catholic social teaching, to climb over millions of dead babies' bodies to grab hold of power. One of them is running against Trump. 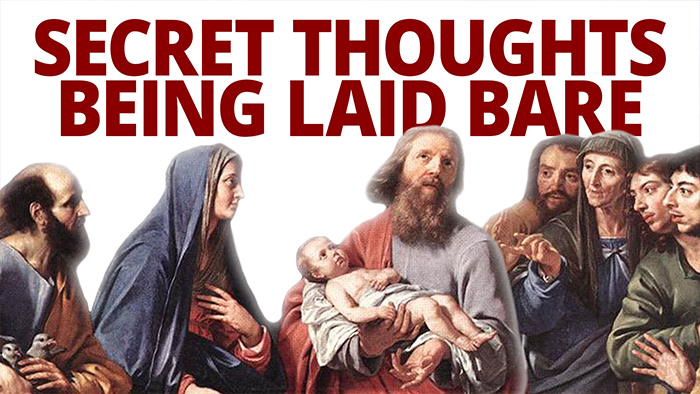 Secret Thoughts Being Laid Bare
Everything is being exposed.