The breakaway Catholic group known as the Society of St. Pius X ("SSPX") has a sex abuse issue, a cover-up issue as well as a homosexuality issue within its ranks. Let's dispatch with the cover-up issue first.

With the exception of a flurry of statements which kept being published, then taken down, then re-worded, re-published, taken down again and so forth, the SSPX has said practically nothing beyond vaguely admitting guilt and has actually done far less about its internal evils since Church Militant's groundbreaking investigations beginning in April.

In fact, in a stunning display of hubris, the society even published a statement a couple of weeks back to followers saying they should have an SSPX attorney present with them if/when they are ever questioned by investigators probing the sex abuse and any subsequent cover-up.

Even the modernist Church of Nice doesn't say or do that — at least not publicly. Imagine someone who is being questioned as part of discovering more details in an ongoing investigation being told by the group the investigation is targeting that they should have an attorney present from the targeted institution.

The person isn't under suspicion. State authorities are just doing what they do — which is trying to unearth facts. Yet the SSPX boasts it's "cooperating" with investigators. Any normal person would look at the reality and say they are trying to obscure, interfere with and steer the investigation, not cooperate with it.

Moving on from cover-up to what is being covered up — it's sex abuse. Church Militant has reported multiple cases of sex abuse involving male minors as well as adult women and teenage girls. One former priest (who was found guilty but scurried away to a location near SSPX headquarters to avoid justice) was finally apprehended by police specifically because of our reporting.

No one in the SSPX leadership contacted authorities to report him. It was our reporting that ended him up behind bars. And yes, he'd abused children. Likewise, we have reported that in a large number of the sex abuse cases involving the SSPX priests, the very top leadership knew all about it and kept transferring the priests around, covering up for them, blocking investigations by secular authorities, transgressing agreements with the Vatican and so forth.

The only 'privilege' the SSPX enjoys is the ability to blind some of its followers to its sex abuse, cover-up and homosexuality.

This is not an honest group of men. And no, it's not a case of a couple bad apples. When the leadership across the board is involved in all this and lies, obscures and so forth — that's not just a few bad apples. It's most especially egregious when you consider what the society has presented itself as.

Their members claim to be (or reference) what they call "Eternal Rome." What they mean by that is only they have kept true to the Church, holding fast to the teachings, Liturgy and so forth. In short, the correct understanding and practice of the Deposit of Faith has been deposited in them; therefore, the society enjoys a certain type of privilege.

That's complete hogwash. The only "privilege" the SSPX enjoys is the ability to blind some of its followers to the reality of its evils in the areas of sex abuse, cover-up and homosexuality. And speaking of homosexuality, it has now come to light that some men being ordained for the SSPX were known to be homosexual while they were in seminary.

While this may not come as a surprise in the Church of Nice where being homosexual practically is a requirement to be ordained, it seems, in the SSPX or "Eternal Rome," there is the claim among leadership that no homosexual men are being ordained.

Well, that's a lie — another lie. In 2016, a young man by the name of Francis Palmquist was ordained for the SSPX. His training and formation had taken place at St. Thomas Aquinas Seminary, which, at the time, was located in Winona, Minnesota.

Palmquist's seminary rector was Fr. Yves le Roux. Church Militant has spoken with a seminarian who went to school with Palmquist and was hit on by Palmquist once. Likewise, the seminarian knew of multiple complaints from others about Palmquist made to the rector, le Roux.

Palmquist went on to be ordained (as we said, in 2016) and was assigned to Mexico where he underwent a crisis about a year later. As an SSPX priest, he began a romantic relationship with a local guy and eventually left the society and the priesthood to live an openly gay life.

He now runs a tattoo parlor in Guadalajara and lives with his Mexican boyfriend. On his own Facebook page, Palmquist freely admits that while in seminary he confessed his struggles with homosexuality to his spiritual director.

Yet despite his struggles and despite the complaints (which were general knowledge), le Roux advanced him on for ordination, which precipitated a crisis in the young man's life and presumably still disturbs him on some level.

Palmquist has a Facebook page ("I Am Judas Project") and in a very telling revelation from last month, says of his pain and struggles with same-sex attraction while in seminary and afterward, "I remember waiting at least a month for a response from the head superior of my congregation. I went to him as a child to his father, begging for help, and he was too busy to respond."

There is no other way to characterize that other than sad. What's more, Church Militant has been told that in follow up conversations with Palmquist, le Roux has said he would welcome him back to the society as a priest if he leaves his lifestyle.

The SSPX is no more 'Eternal Rome' than the Church of Nice.

And let's be very clear: This is not about the young man and his struggles with homosexuality — God help him. It's about the neglect for him from within the SSPX. Palmquist is a casualty as much as anything — a man who has the indelible mark of priesthood forever emblazoned on his soul is now living in Mexico with a boyfriend giving tattoos for a living.

None of what le Roux did, of course, was criminal; but it was unethical and immoral. Add that to the actions of the society at large — which are criminal — as well as the attraction to Nazi lore of too many priests and followers, and all that on top of what many former priests and followers have called a "cult" and there is a serious problem here.

It's made especially serious because, first, the Church is in a crisis the likes of which she has never seen before; and, second, this group holds itself up as the remedy to the crisis, as the "Eternal Rome," and dresses itself up in the pomp and circumstance of the Traditional Latin Mass, which can easily fool unsuspecting or unquestioning Catholic refugees from the Church of Nice.

Whatever the definition of "traditionalists" may be, this group gives it a bad name and mars all other Catholics trying to appeal to tradition and orthodoxy as a remedy to the crisis.

Within the Catholic social media world, there are various well-known websites and personalities who rely, at least in part, for their personal support from the SSPX crowd.

On top of that, they are personally sympathetic to the larger cause of combatting the crisis — a good thing — but as a result, are willing to fall silent about the sins of the SSPX because of their personal relationship with each other.

They will not cover these stories. They will not condemn the filth, despite the fact that they were tripping all over each other (and still do) to go on and on about the evils in the Church of Nice. That's hypocritical, and it does a huge disservice to the average Catholic who listens to or reads them. In fact, it's dishonest.

To willfully conceal the truth, to make an editorial decision to not report an evil, is to be complicit in the cover-up.

And to do that to continue to curry favor with the followers of SSPX so they will continue to listen to you and support you financially is no different than what the Church of Nice Catholic establishment media does. It's lies and deception employed to keep you in the lifestyle you've grown accustomed to.

What about the victims of these priests? Are they not worthy of having a voice? You all gave a voice to the string of victims of the Church of Nice in a heartbeat. But victims of the exalted SSPX, they can never be spoken to because the illusion would be shattered, and you in your turn would become subject to the same vile attacks Church Militant has received for exposing all this.

We'll ask the same question we ask of the Catholic establishment media: How do you sleep at night? The SSPX is not the salvation of the Church. Perhaps, maybe, at its founding there was something of that present as an intention.

But that was almost a half-century ago, and since then, the society has adopted an attitude of disobedience and has steered off course accordingly. This adoration of the Latin Mass for its own sake is preposterous. The Church fell apart when the Latin Mass was the only Liturgy there was.

The SSPX is no more "Eternal Rome" than the Church of Nice. Obedience and orthodoxy are what's needed. An end to the lies, cover-up and complicity of Catholic bloggers who have a personal dog in the fight — all of this has got to go.

Remember, those of us whom Our Lord has blessed with a microphone have a much greater responsibility to tell the truth! 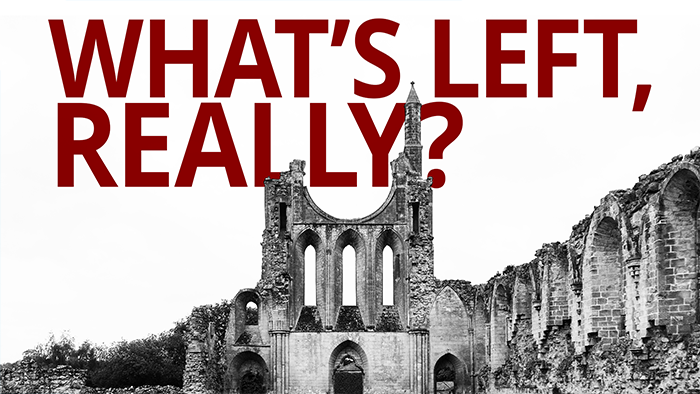