Today is Holy Thursday, the day in which all of human history — salvation history — was collapsed into the Upper Room. All of salvation history has revolved around the single point of reference, the Real Presence of Our Blessed Lord in the Holy Eucharist, under the appearance of bread and wine.

What Our Lord instituted in the Upper Room with His Apostles was the ability to actively participate in His saving work on Calvary no matter where a person is on earth or at what time or epoch they live in. Almighty God did not so favor the inhabitants of Israel that He denied the rest of humanity access to His divinity.

But just as He veiled His divinity under His humanity then, He continues to veil Himself now — each time requiring an act of faith on the part of the men of the age. Either that Host offered in Mass is Jesus Christ — Body, Blood, Soul and Divinity — or it is not. There is no other choice.

Frequently, God demanded an act of faith on the part of a person when the person asked something of Him. This was not for His glory per se, but it was for the sake of the person. If a man would declare his faith in what had been presented to him, he was given access to the glory of God.

God proposes truth to us, then we must decide. We are each given sufficient interior truth to choose correctly. God appoints the time when a person comes to the moment of faith, for He alone knows the time of perfection when a person is sufficiently prepared to choose.

God proposes truth to us, then we must decide.

Ultimately, supernatural faith is granted to bring someone to the reality of the Eucharist, not as a mere intellectual proposition, but as a fully personal relationship to the truth — for the Eucharist is Christ, Who is Truth Himself. No one on earth can have a more personal, more intimate relationship with Our Blessed Lord than the one who brings His actual Body and Blood into his own body. No other act of relationship can be more efficacious.

Of course, the Blessed Sacrament, the Eucharist, is made present to us at the Holy Sacrifice of the Mass. That's why the recent odd decree from Rome restricting Masses at St. Peter's Basilica has created such discord among the faithful (and many clergy — including the esteemed cardinal, Raymond Burke).

Such events conjure up in many people's minds questions like, "Is the end of the world approaching?" or "Are we in the Last Days?" We are now approaching the second Triduum in a row where the Holy Mass is either unavailable or greatly restricted, being marginalized and minimized under the pretense of safety from the virus born of a communist, anti-God nation that harbors a deep hatred of the Church.

Everywhere in the Church, it seems scared or wicked shepherds are going along with or succumbing to the insanity of the age. This has been being prepared for years, however, as bishop after bishop has forsaken his sacred duty and allowed evil into the Church — moral and spiritual corruption like never before seen, the lived experience of the denying or disregarding of Our Blessed Lord's Real Presence.

This is visible in the complete silence and even cooperation of many bishops who allow or even cheer on the sacrilegious distribution of Holy Communion into the hands of not just unrepentant public sinners, but actual enemies of Christ and His Church. And just as Our Lord allowed Himself to be delivered into the hands of Judas and the mob in the garden this night 2,000 years ago, He mysteriously permits it even now.

These evils must be fought and battled, as Cdl. Burke says. His Eminence granted a recent interview that Church Militant very much recommends you view in its entirety. Listen to it, and soak it in.

The days we are in are dark indeed, and, as the gospel records for us on this day 2,000 years ago about Judas, Satan entered into him, he went out into the night and it was dark.

Get into and remain in a state of grace. You are the light of the world, and the supernatural gifts you are granted because of that create a light in you that the darkness cannot overcome. Put your light out in front of men. Shine brightly for them so that those of goodwill come to the fullness of truth. 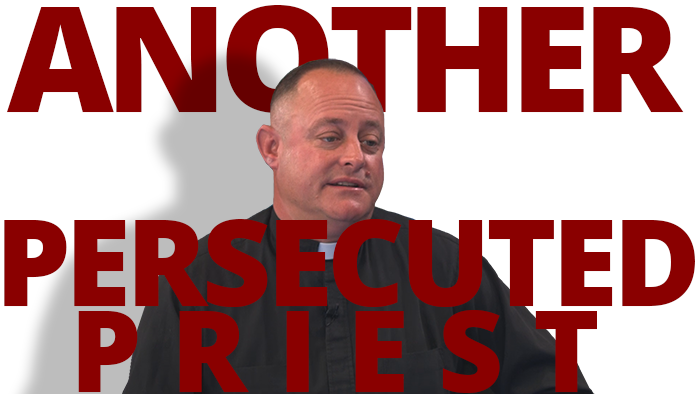 Another Persecuted Priest
The mounting cost of being a faithful cleric.