And they never seem to get answered.

Today is the sixth year — to the day — that Buenos Aires Cardinal-Archbishop Jorge Bergoglio stepped out on to the loggia overlooking St. Peter's Square as Pope Francis.

One of the scoundrels — which appear to be quite numerous — who were busy securing his election was none other than the now-Mr. McCarrick, a man he had to bust down to the lay state from the heights of being a cardinal because of McCarrick's clericalism — er — homosexual predation, mostly of seminarians.

But what Church Militant has dug up is that the Bergoglio-McCarrick connection, coupled with the homopredation of seminarians, apparently has a long history.

In case you haven't noticed, or possibly forgot, there is a world of filth and suspicion surrounding Mr. McCarrick that needs to be gone over extensively.

The more you dig up on the homopredator former cardinal, the more questions arise, and the folks in Rome are providing no answers or clarity. And that includes a lot of current cardinals like Wuerl, Farrell, Tobin and most especially Cupich who want the spotlight of McCarrick as fast as possible.

Now here's a real head-scratcher. McCarrick used to visit Argentina frequently while none other than Jorge Bergoglio was archbishop of Buenos Aires. In fact, from a speech he gave at Villanova, we have learned that McCarrick said he had become great friends with Abp. Bergoglio during those trips.

And here's where the waters get very dirty. McCarrick was racking up the frequent flier miles to Argentina because of his deep involvement with a religious community known as the Institute of the Incarnate Word, known also as IVE.

IVE was, at least on its face, a pretty orthodox, conservative outfit, which makes things instantly weird. Why would a liberal, Catholicism-hating prelate like McCarrick be not just hanging around this group, but championing their cause?

McCarrick was such a champion of the group that he actually ordained many of the seminarians, which should immediately raise a red flag in anyone's mind, McCarrick and seminarians is never a good mix.

But in this particular case, it seems to be a natural fit because the founder of IVE was himself a homosexual predator of seminarians — Fr. Miguel Buela. In 2016, the Vatican confirmed that Buela had been found guilty of sexually abusing seminarians, which raises serious concerns about McCarrick's full-throated support for the group.

Now for the head-scratching part, the Argentine bishops, to a man, were completely opposed to the presence of the community in their country. In fact, it was Bergoglio himself who led the charge against the group, eventually getting it shut down.

But McCarrick came along and snatched defeat out of the jaws of victory for the community and through his Vatican ties — most especially Cdl. Sodano — had the group fully restored.

Pope Francis knew — all the way back when he was in Argentina; he led the fight against it — that the IVF was founded by a homopredator. He knew McCarrick's extremely close ties to the group.

He knew McCarrick had bested him in Rome and had gotten the group re-established, yet through all this, he maintained a close friendship with McCarrick both in Argentina and of course in Rome after being elected pope.

Something really stinks here — really stinks. There is much, much more to this story, and if you happen to know something, please send us an email at our tips line.

Of course, it will all be kept confidential, but this whole story needs to come out. IVE has various houses and clergy here in the United States. In fact, when McCarrick retired as archbishop of Washington, D.C. in 2006, he moved into a house in D.C. with IVE seminarians in attendance to him.

That raised a lot of red flags at the time, even being a sore point between McCarrick and the D.C. Vatican embassy, to the point of a yelling match. The entire face of this story is, for the moment, an enigma — seminarian homosexual abuser travels extensively to Argentina to visit another seminarian homosexual abuser, stopping in to pay courtesy and social calls to the local archbishop, a man he was deeply involved with in getting elected pope, despite the fact that, as archbishop, he fought him tooth and nail to get his favored community closed down, all the while remaining on extremely good terms with him.

Terms good enough that he would elevate the pervert to the position of close papal advisor, not only after having been informed by Abp. Viganò in 2013, but also having personal knowledge before Viganò had even said a word.

There is a lot more to this story, so please share this everywhere on social media, with everyone you know, and have those who know contact us.

This isn't a question of what the Pope knew and when he knew it. We know that. The question is: Why maintain the deep friendship while also having a public fight with the man?

Something doesn't add up, but little does since that fateful night six years ago. 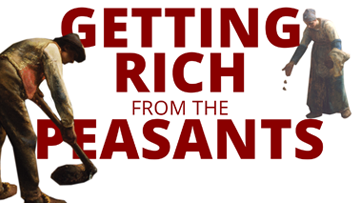 Getting Rich From the Peasants
Spiritual and financial abuse.