Let's get straight to the heart of the matter. Something is seriously wrong at EWTN — morally wrong.

Ever since Mother Angelica's departure, the network has come under solid control of the nefarious bishops Mother railed against for corrupting the Faith. And now, the hypocrites who run the network — the laymen who know what side their bread is buttered on — go along to get along. The shrinking media empire has simply sold it soul — hitched its wagon to the plunging star of the U.S. hierarchy. It's both revolting and sad to watch, all at the same time — a train wreck in slow motion.

Leaders and many of the personalities are deceiving the aging viewership with their cutesy-pie, sissified, Church of Nice-palaver of the Faith, all while selling out Mother's network so they can keep their jobs and retirements covered.

For example, in a stunning move — even for that duplicitous crowd — leaders at EWTN actually showed Good Friday service from the National Basilica in D.C. with none other than — drumroll, please — homosexual predator Msgr. Walter Rossi "on stage." And if that wasn't enough, he was actually reading the part of Our Blessed Lord. Judas would be more fitting. Or would that be practically any one of the bishops?

The shrinking media empire has simply sold it soul — hitched its wagon to the plunging star of the U.S. hierarchy.

Rossi is under investigation in not one but two dioceses for making homosexual advances to college students at Catholic University of America, where he was forced to step down from the board in disgrace once the Washington Post got ahold of the story.

But because he is part of the gay cabal in the nation's capital, that little clique of homopredator-in-chief Theodore McCarrick and lying cover-up artists Donald Wuerl and Cdl. Joseph Bernardin's gay waterboy Wilton Gregory — the newest in a line of accused homosexual archbishops of D.C. — Rossi is pretty safe. He and his gay mafia pals are just sitting out the storm of publicity, probably excited that the Wuhan virus death toll is taking attention away from him.

Rossi is close companions with homopredator thief, former West Virginia bishop Michael Bransfield — good buds from their time at the Basilica and in D.C. together. Wuerl, Rossi, Bransfield, McCarrick — all are buddies from way back. Rossi hails from Scranton, Pennsylvania and is a "favorite son" of the highly effeminate bishop there, Joseph Bambera.

Bambera in Scranton and Gregory in D.C. are supposedly doing their due diligence in getting to the bottom of the filthy charges against Rossi — charges that even Abp. Viganò said he knew about during his time in D.C. Everybody knew and knows about Rossi. That's why he could get away with so much and remain untouched.

From gay lovers — some former priests, others current priests — to the protection he gets from the gay mafia, not to mention actual mafia back in Pennsylvania, Rossi is a gay playboy, a boy who played a little too close to the fire this time around — enough to keep getting star billing in the Washington Post.

So here's the question: Why did EWTN — knowing full well Rossi has not been sidelined as he should be, but is too protected — why would EWTN air Good Friday from the Basilica?

And here's a point of reference: Church Militant put together a list on our site of various Masses and so forth that are livestreamed to help people remain spiritually grounded during these Wuhan days. One of the links we looked at for a New York heartbeat was to the National Shrine and we immediately said, "Not a chance in Hades." Rossi is there and we don't want to give that homopredator any semblance or appearance of normalcy and scandalize the audience — no way.

Well, if we could do that in about half a nano-second, why couldn't EWTN's top dogs? Interestingly, once the complaints and outrage started popping up on social media, EWTN mysteriously pulled down the link. Poof — it was all gone. It never happened. But it did happen.

Just like the Stations of the Cross happened, or should we say the "Politics of the Cross" happened — were aired again by EWTN. One of the bishops present was the new Saginaw, Michigan bishop, the replacement for Joseph Cistone known as Bp. Shredder, for obvious reasons. Cistone died in the middle of covering up the homopredator Fr. Richard DeLand, who is now behind bars where he belongs.

By the way, and for the record, the Saginaw diocese lied about the circumstances of Cistone's death and refused to allow an autopsy to be performed, hoping everyone would just think it was from his cancer, which it wasn't.

But back to the new bishop of Saginaw, Robert Gruss, formerly of Rapid City, South Dakota. When there, he accused Roman Catholic Faithful's Stephen Brady of being "evil" in trying to dig up dirt on the notorious Cdl. Cupich of Chicago, a scoundrel of a Churchman.

While he later offered one of those "I'm sorry you were offended" PC-unmanly apologies, Gruss made his partisanship well-established. Eventually, he got moved to Saginaw. That's a good career move, Your Excellency.

Anyway, this man, during the Stations of the Cross — unable to resist the urge to further ingratiate himself into the highly politicized, phony Church of Social Justice — declared The Tenth Station: Jesus is Racially Profiled. It was all part of a Stations of the Cross that had been "Wuhanized," with Gruss strolling about the cathedral, associating the sufferings and passion of the God-Man for our Redemption with the Wuhan virus.

But see, this is par for the course with these theological degenerates, malformed as they are at the hands of a Modernist clergy in their seminary days. They always need to feel "relevant" — to be up with the "latest thing," the fad, the cutting edge. And in the end, they look and sound ridiculous. But their malformed minds think this is theology, reaching out to the sheep.

But the sheep have voted and stampeded out of their churches, symbolically shown as various bishops so eager to please Caesar offered Triduum services in total isolation in their empty, echoing cathedrals, no doubt more concerned with the lack of a collection than the overwhelming lack of supernatural faith, including their own.

Of course, the total meltdown of the Church of Nice is being brought to practically live on EWTN, as the ecclesiastical suck-ups there who run the show there have nothing in mind other than to keep puckering up to the bishops. And why, you ask? Because the bishops give them and the entire establishment access — access to parishes and bulletins and conferences, etc. — meaning money. It grants a kind of credibility, but being real here, it's only the appearance of credibility.

The last real 'man' at EWTN was Mother Angelica, which is why the 'women' bishops hated her guts.

The last real "man" at EWTN was Mother Angelica, which is why the "women" bishops hated her guts. She called them out for their warped theology and that proud bunch of Pharisees couldn't handle the truth.

Some things in the Church won't recover from this virus, and while there is a certain sadness around that, it's not all bad. If something — anything — is purporting to be Catholic but in reality is not, then it shouldn't be allowed to continue, at least not as "Catholic."

For example, think of all the parishes around the country — the fewest, by the way, since 1965 — who this Easter did not distribute millions of sacrilegious Holy Communions. While you, of course, prefer that those millions go to confession and receive in a state of grace, you know it wouldn't have happened, so good — no sacrilegious Holy Communions.

Online Masses are bombing in terms of viewers, so again, good. The pabulum spewing from the pulpits for the past half-century no longer has any kind of audience to pervert.

Again, however, the formerly faithful network EWTN takes none of this into consideration as the leaders there hustle to keep up appearances of a Church, but the Church is in a death spiral. Those leaders betray you, Mother Angelica's legacy and of course, Christ Himself. They will not say the truth, so they no longer deserve your support. Why would anyone hand over money to an organization that promotes homopredators in the sanctuary and phony-baloney, social justice "theology" passed off as a devotional practice?

As various parishes will certainly disappear as a result of this, and hopefully not a few dioceses along the way, one can only hope that so too will EWTN, having long since abandoned any real, bold, soul-shattering presentation of the Gospel. They no longer have a mission.

If you don't believe us, just tune into the Good Friday service they aired live. Oh wait, they took it down to cover their spiritual crime, to keep fooling you.

What Wuhan has done in the Church is to make these battle lines very clear indeed. 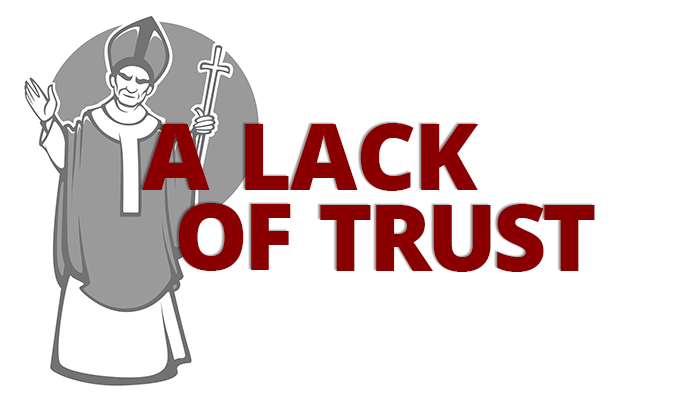 A Lack of Trust
And who can blame them?