They got control. And now, it's full steam ahead.

This June, Birmingham, Alabama Bp. Robert Baker turns 75, which means he will be handing in his resignation as is mandatory for every bishop. The reason this is important is because that diocese is home to EWTN, and whoever the bishop is there can have a large degree of influence on the board.

Church Militant has learned that plans are underway to bring in LA Auxiliary Bishop Robert Barron as the new local bishop, thus giving him some not-insignificant influence over the network.

In fact, if these as-yet unconfirmed reports pan out, it would underscore what has been happening in the U.S. Church for quite some time — and EWTN in particular.

It's no secret that the USCCB was mad as hell at Mother Angelica and tried to get control of her network away from her.

He could not have had that role and maintained it without being on very friendly terms with the bishops' conference, the same bishops who were trying to get EWTN away from Mother. When she had to step aside because of their machinations and Warsaw stepped in, they had their man in the stable.

Word is that Warsaw was able to assume leadership because of veiled threats by the bishops that EWTN would be cut off from access to the Church establishment if he wasn’t in control.

Warsaw essentially began and beefed up the news department and even oversaw its physical movement from Alabama to Washington, D.C.

Pope Francis, in a signal that EWTN had now become "mainstream Catholic," in 2017 named Warsaw as a consultor to the Vatican's Secretariat for Communications. Can you imagine that if Mother Angelica was still running the show?

And that's where things stood until the McCarrick bombshell exploded and the U.S. bishops began losing massive credibility, with much of the senior leadership routinely lying or deflecting about the scandal.

They simply lost control of the narrative, especially when the secular press started hammering them about the scandals on an almost-regular basis now.

Job one of the bishops collectively is to regain control of the narrative, which doesn't have any necessary connection to actually fixing the root of the problem, which can be traced right back to the mix of finances and sexual predation, which is overwhelmingly homosexual.

Fixing the problem itself is going to require an all-out commitment, which so far they have demonstrated not the slightest symptom of wanting to do.

But fixing their heavily damaged image, whether it's true or not, they at least think that can be done, and hence all the chatter of sending Bishop Bob to Birmingham where he would arrive with private marching orders from the bishops' conference, which everyone would understand, to shore up their badly damaged image.

EWTN could then be put in play — especially Warsaw's news operation — to begin what would essentially be a massive propaganda machine.

Back in the 1970s, many of you might remember, the bishops took up a collection of tens of millions of dollars to start what was billed as a Catholic Television Network, and multiple archdioceses built TV studios as part of the plan.

The archdiocese of Detroit, under the leadership of the massively uber-liberal Cdl. John Dearden, spearheaded the campaign. But what was supposed to become a huge propaganda tool completely flopped. All the hardware was in place, but there was no content to speak of — nothing that has any appeal, anyway.

That's one reason the bishops were so envious and vindictive against Mother. She did with donations and prayers what they could not do with an enormous bankroll of tens of millions.

But that was then. This is now.

Today, having learned from their past mistakes and having grabbed effective control over EWTN, they have an already established — especially when you consider the TV operation expanded its control in the communications realms by gobbling up National Catholic Register and Catholic News Agency.

More Catholics, in the United States and the world, get their Church news from the empire than from any other source, hands down.

That crisis, of course, is a sex abuse catastrophe, which is an overwhelmingly homosexual predation problem. In fact, it's already on the way to that status. The presence of Bp. Robert "no one really goes to Hell" Barron would only secure that status and lock it down.

Barron is the face of the Church of Nice in the United States, the man who presents Catholicism as a good choice among lots of other choices, some of which are pretty good themselves. The U.S. bishops need rehabilitation, and according to their way of doing things, he would be the perfect man for the job.

His watered-down, squishy, "avoid giving offense at all costs" approach has deluded a very large number of Catholics, making Catholicism seem kind of a cool, easygoing hobby, nothing of the rigorous call to sanctification requiring the cross and spiritual combat that the Son of God talked about.

Bishop Bobby pushes a "Catholicism is cool" theology, and given our current culture, that has a lot of appeal and has garnered him a large number of ignorant sheep who want to feel as though they are kind of plugged into spirituality and maybe even the Church, and his style gives them just that chance — close, but not too close: just the way Satan likes it.

He is not a worthy successor to Mother Angelica. He would not be part of the effort to get the bishops to clean up their own house.

Time will tell if Bishop Bobby Goes to Birmingham, but if he does, expect a full-frontal assault of propaganda with a massive increase in EWTN's presence throughout the Church establishment — the same establishment that routinely blackballed and attacked the network's founder.

The bishops need to rescue their destroyed credibility, and converting EWTN into an oversized public relations firm with Bishop Barron calling the shots would certainly fit the bill — at least in their minds — but, in reality, will continue to reduce their almost non-existent credibility. 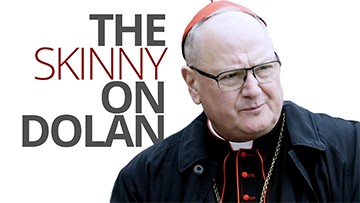 The Skinny on Dolan
Lies, concealments and deceptions.