Before even more souls are damned.

Have you noticed that a momentum is actually building in the Church, a kind of groundswell — at last thank God — where the homoheresy is finally being dragged out into the light and exposed. There are concentric rings in this heresy, and each in its own way has done tremendous damage.

There is, of course, at the heart of it, psychologically sick men, bishops and priests — and now cardinals — who are both attracted to other men sexually and who act on it. Surrounding them in the next ring are those with the same attractions, but have not, to date anyway, acted on it.

And their reasons for not acting should not necessarily be immediately thought to be holy. Are they just scared? Are they self-conscious? Have they substituted the action with pornography? There are all sorts of reasons men with same-sex disorder do not take it to the next level.

Then the next circle is the men who are not gay themselves in the slightest, but who sympathize with these particular men, owing to acquaintances or friendships during seminary days or later in their careers. They truly believe that a man who is homosexual but not just acting on it is perfectly fine to be a priest. They are naive as Hell. That man is a powder keg who can explode at any time, given the right combination of circumstances.

For this crowd, it's personal. But their concerns are misplaced. Their concern should be for the faithful. Instead, their loyalties are misplaced. Then there are, in the next ring, the careerists who don't have any personal stake in the game one way or the other, but know if they oppose the homo juggernaut in their diocese, their careers will come to a screeching halt, so they rationalize and are enablers. In this regard, like all the above, they are cowards and not real fathers because they don't love their children enough to speak up, even at the cost of their own interests.

All of these men, whichever ring they occupy, need to publicly repent change course or be swept from the ranks of the priesthood — period. A massive #MeToo movement within the Church, except this one with a twist.

Every bishop should be ordered to stand up publicly and denounce this heresy and, of course, that would cause great consternation a part of the massive cleansing, because a huge number of bishops — who owe their office to the homoheresy — would not do it. But their silence could finally be used against them, as proof of their unfitness to hold such office.

Of course, this would never come from Rome, given the current stranglehold the gay mafia has on the Vatican, for now.

But you laity can write your bishop, you can go up to him after Mass and politely but resolutely demand he admit if he has, in any way, been a part of this — active homosexual, homosexual, protector, enabler, careerist?

The same question needs to be put to your pastors, publicly. Believe me when I say there are countless priests out there who would love for this to happen, because they are persecuted by the homo-gang.

Pope Francis, who the homo-gang of clerics just fawn over quoting, said, "Make a mess." Well, here we are, making a mess. Ask your pastors and bishops, "Have you had any role in the promotion of the homoheresy? A simple yes or no?"

If they refuse to answer or get all high and mighty on you, take that as a yes and refuse to fund this heresy anymore.

For example, here in Detroit, the archdiocese under Abp. Allen Vigneron is going to use his "plan" to respiritualize the archdiocese — a plan with the theologically problematic name, "Unleash the Gospel" — to actually get $200 million out of the faithful — this on top of a campaign which just concluded a short while ago where they squeezed $130 million out of the faithful after paying the outside consultors their 10 percent cut of $13 million. A plan to supposedly increase faith, etc. is being converted into a vehicle for yet another fundraising campaign.

Now, this hasn't been announced officially yet — the archbishop and his gang didn't want to appear greedy, but a good number of people at the chancery and in the archdiocese are extremely disturbed by this plan and called us to tip us off so we can tell you.

So, this is a good example of what we're talking about. They want $200 million. For what? To fund the retirements and pensions of people who spent decades undermining the Faith in a hundred different ways. Why would any Catholic contribute to that?

Archbishop Vigneron has allowed a huge number of men in this archdiocese to remain as pastors who he knows firsthand support the homoheresy and an assorted bunch of other heresies. He lets a homo Mass go on every week — the oldest of its kind in the world.

So before you deliver over a dime to the yet to be announced next money-making effort, he needs to answer the question, "Were you or are you in any way a participant in the homoheresy? Did you block orthodox men from entering seminary when you were rector? Did you give approval to men you knew who were part of the homoheresy to be ordained? Why do you allow, and have allowed for your almost 10 years as archbishop here, men who are homoheretics to remain as pastors? Do you have people in your inner circle who support the homoheresy?"

These are all legitimate questions and need to be asked, not just of Vigneron, but every last bishop in America and every pastor. This homo-madness has got to be stopped in the ranks of the clergy.

If an archbishop or priest was, at one time, embroiled in all this but has since privately come to his senses, then a simple resignation is in order — coming back to the side of the angels is the expression among clerics. We all make mistakes, we all sin, but not without penalty and consequence.

Many of you are approaching the grave — some sooner than you may think. Resign your offices and do the right thing. Admit to the public your involvement in all this, whatever the level, and resign. Lay it all out there.

You have been a part of the ruination of the Church and much better you begin to atone now than when you come before Our Blessed Lord. Your money campaigns, your politicking (even if for some imagined good reason) will afford you nothing in the Divine Presence and your judgments.

For the good of your own souls, and the souls of those in your care, admit everything, lay it out how it damaged the Church and then resign and retire to a life of penance. It will beat the alternative that awaits you. You cannot go to your judgments with none of this publicly confessed, because what you did and do had and continues to have a public effect. 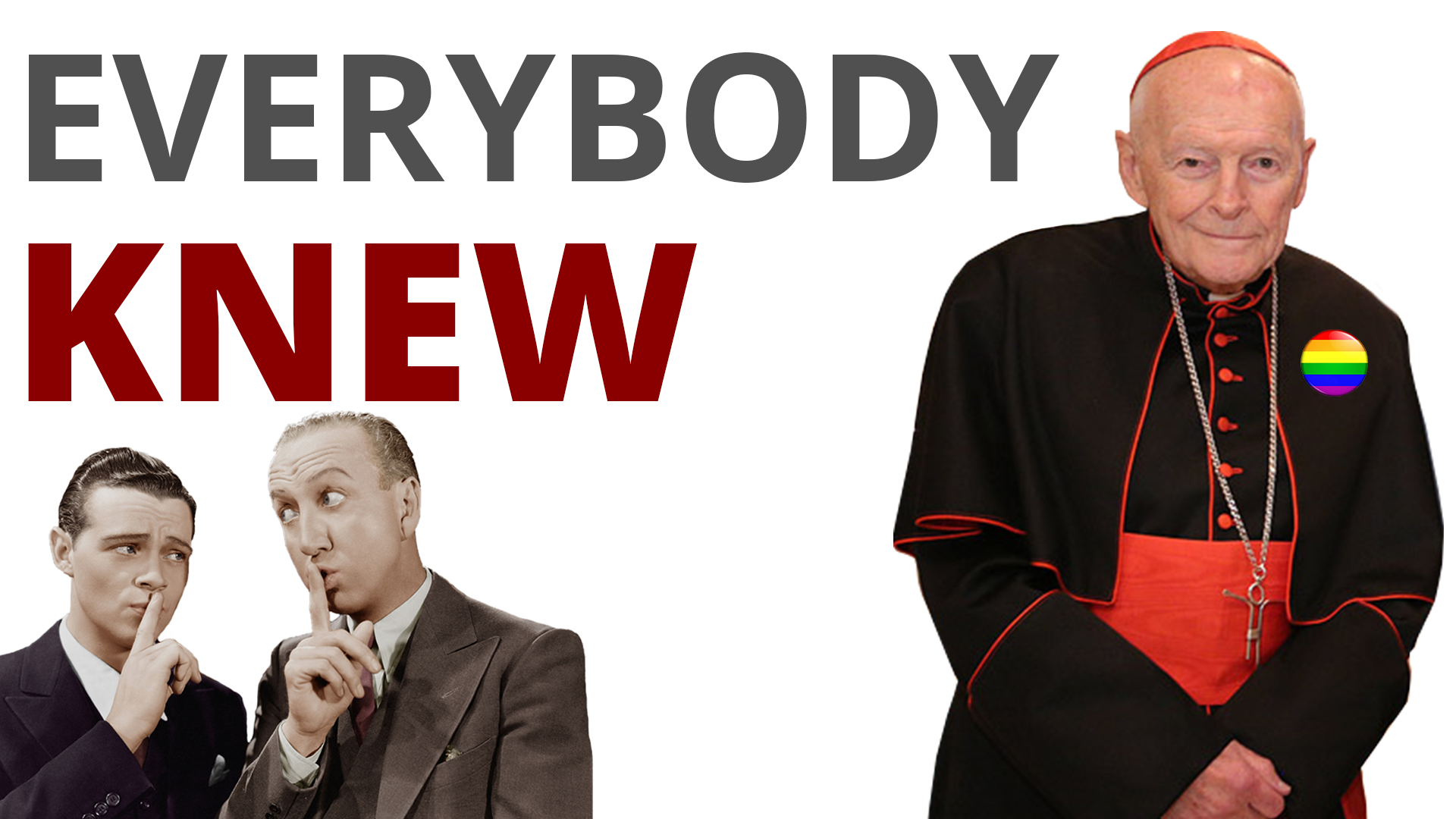 Everybody Knew
And chose to keep their mouths shut.