But Facebook can't even publicly define what "hate" is.

Following up on yesterday's topic about the strategy by Facebook and other giant social media giants to limit conservative voices on the internet, we like to begin where we left off and urge you in the strongest possible terms to stop using Facebook to get your Church Militant content and start coming to us directly. Facebook and others want to control what you hear and see, just like their older brothers in the secular media world did for years by manipulating content at the major networks and newspapers. You, at least, have the opportunity to free ourselves from their socialist propaganda, so do so.

Facebook does not care about the salvation of you or your family: Church Militant does. Google doesn't care about you and your family getting to Heaven: Church Militant does. So, why would anyone, who cares about the meaning of life like we do, rely on hearing or viewing our content after it has been "screened" by people opposed to Church teaching? Come to us directly.

Now, why is all this coming up? Because whoever controls the media controls the game. And since the emergence of the internet, it has gone from being like the wild West to a more sophisticated propaganda tool by the same ideologues who controlled the old media. And they use clever language — clever because it is deliberately vague — to control and filter what you see and hear. Here is the whole point being played out last week before a U.S. Senate panel questioning Mark Zuckerberg of Facebook who was very coy in how he answered some questions. Notice the word "hate." It keeps coming out of Zuckerberg's mouth, as well as many people's mouths who love to throw it around to lampoon conservatives — political and theological.

Their working definition of hate is simple — anything you say that disagrees with them. If you disagree with abortion or same-sex marriage or whatever, then you are a hater and must be silenced. This was the whole line of questioning taken up by Nebraska's Senator Ben Sasse, who drove home this very point leaving Zuckerberg pretty exposed. Now stop for a cotton-pickin' minute here Mr. Zuckerberg. You tell Senator Cruz that you don't allow "hate" on Facebook, then you turn around and tell Senator Sasse that defining "hate" is really a hard thing to do. So how is he preventing something to be on Facebook when he can't or won't give a solid definition of it? And notice when he answered Cruz he included that nutty liberal idea about people feeling safe — another flaw in his argument that Sasse zeroed in on. Well, he may not want it to be the case, but it has been the case.

Pro-lifers, orthodox Catholics, political conservatives have all been "algorithmed" into virtual disappearance in Facebook-land, and it does not appear to be coincidental. Even the internet sensations and political conservatives Diamond and Silk were labeled as a threat by Facebook. Here's what faithful Catholics need to understand very clearly: It is the same song, different verse when it comes to powerful media forces opposed to Catholic truth having control over what you see and hear. It's just as simple as this: If you want the real McCoy, then go to the real McCoy.

Don't let other media groups that have a track record of being opposed to Church teaching decide for you what you are going to hear and see from Catholic outfits like Church Militant. It's called censorship, and hate is being used as an excuse to implement it, even when the leaders can't give you a definition of what hate actually is, so they lump it in with violence and terror speech — defending the Church's teaching, proclaiming the glories of the Faith, telling Catholics what they need to know is not hate or violence or terror. But Facebook and other social media outlets think so and act accordingly.

Don't play their game. Come directly to Church Militant, even make us your homepage. Remember that we care about your salvation and saving the souls of your loved ones. Social media giants don't believe that so why submit to their rule? 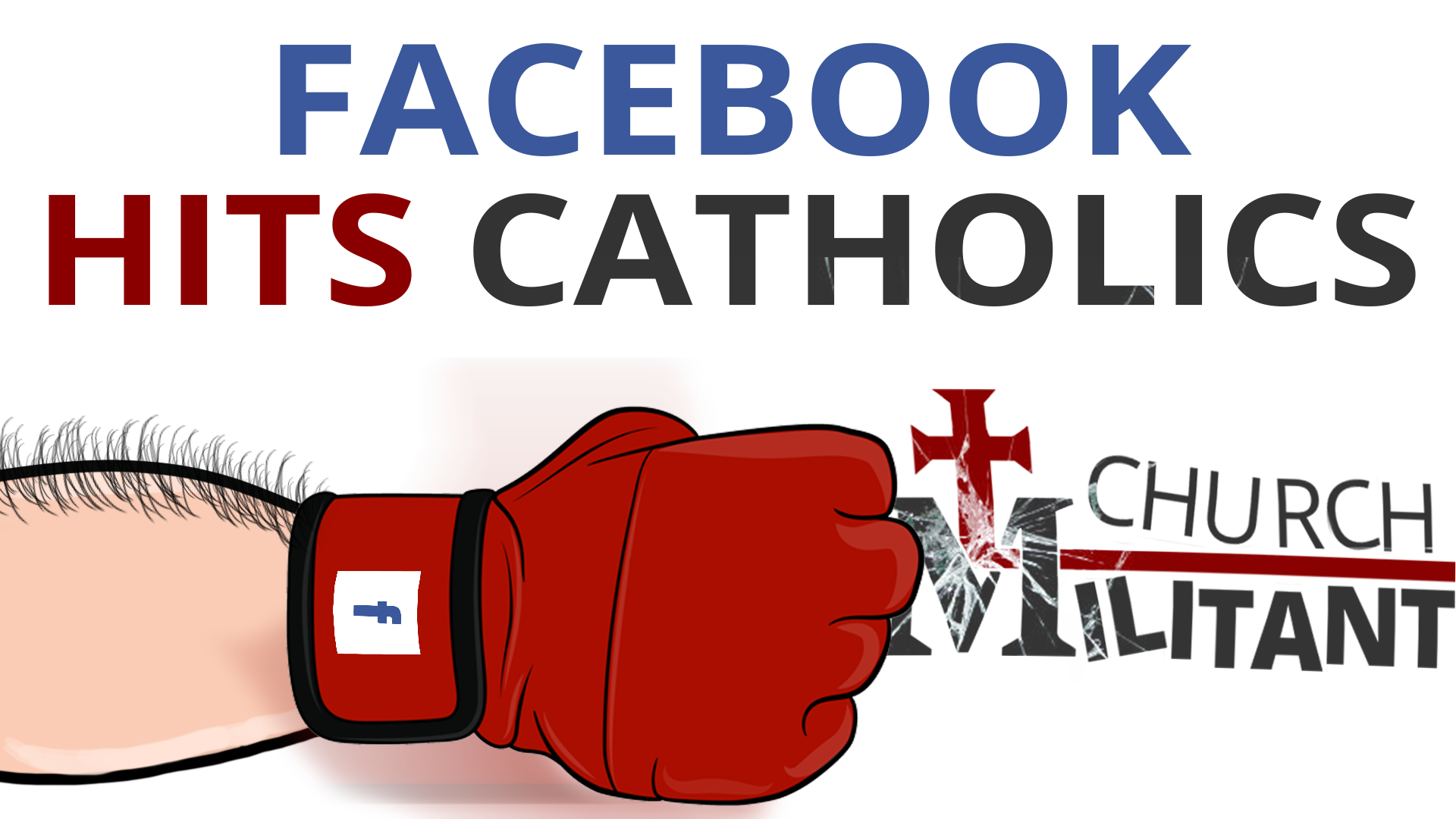 Facebook Hits Catholics
And you need to act now!