Sooner or later, you have to.

According to a new Rasmussen poll, a majority of Americans, 57%, are willing to concede that the election outcomes may have been influenced by cheating. And, interestingly, it would appear that a majority believe mail-in balloting has become the vehicle for this.

It's the same states that seem to keep having problems counting in a timely fashion, and election officials there conventionally blame all their counting woes on the vast number of mail-ins. It's also those same states where the close elections always tip in favor of the Democrats as the counting goes on and batches of ballots keep appearing.

And, of course, the media is right there to explain that this is just how it works, and everyone has to just calm down. However, and this is where the rubber hits the road, there is an unwillingness to actually deal with the actual reality underlying any chicanery that has taken place.

If cheating has happened — now in two successive elections — it is proof that we have reached the point in America where it can happen. It should never have gotten to this point, but it has.

America has not suffered enough yet.

It's almost like the superior team complaining about a bad referee call that cost them the game against an inferior foe. While that may be true and maybe even very likely, if the team was so good, it should never have been in that position to begin with — where the entire game comes down to a bad call.

But that's where American politics has now descended to. A majority of Americans are, at least, suspicious and distrusting of the outcome, and so what? Are there mass protests in the streets like in Venezuela?

Are there demonstrations in front of governors' mansions in the affected states? Are there pickets outside the homes of the secretaries of state who were likely involved in all this (if indeed it did happen)?

For that matter, where were all the voters, years ago, when the Marxists were slowly taking control and putting themselves in a position to steal outcomes?

Here's the bottom line, the reality that needs to be squarely faced: America simply has not suffered enough yet. It will. Oh, it certainly will.

But too many Americans, for too many years, have been content to participate in the pleasures of the sexual revolution. Be it fornication or divorce or cohabitation — all of which lead to abortion and the continuing slide into Hell of a once great nation — too many Americans were simply content to go to the movies and be entertained and enjoy the good life rather than pay attention when the devils were swarming.

Now the work of the devils is becoming evident, but calling the fire department when most of the house has already burned down doesn't accomplish anything.

The family as an institution is no longer a stable institution, at least not sufficiently so — certainly not enough to head off the collapse of a civilization. Running on "family values" means nothing to most of the population because they either have no families, or the ones they have are completely screwed up and don't function in any meaningful way as a family.

It's taken a century of propaganda and brainwashing by subversive forces that are just now beginning to surface, like the Greeks getting into Troy inside the Trojan Horse. Once inside, they laid quiet until the moment arrived, and then the slaughter began.

To carry on with the analogy, most of America is still sleeping and paying no attention to the communists inside the Trojan horse — but the "Greeks" are now beginning to come out.

Americans are asleep because they have been self-consumed for decades with wealth, power, comfort and being entertained. As we hear about in the movie Gladiator, you divert the mob's attention with bread and circuses. Mission accomplished.

But we should never take our eyes off the supernatural reality that this is a spiritual war, and a population that embraces immorality is doomed. Collapse is guaranteed.

A population that embraces immorality is doomed.

To that end, think just how much the U.S. hierarchy, over these many decades and continuing into today, bears an enormous amount of blame for all this. Even today, the same men who produced press releases against Trump's policies like the Federal Reserve prints money have said absolutely nothing about election integrity.

They wouldn't even be going out on a limb if they did. Most Americans have extreme doubts about Biden's presidency being legitimate and the midterm outcomes not being impacted by cheating.

Do the bishops have nothing to say about theft — about the Seventh Commandment: Thou shalt not steal? They are in Baltimore, at this very moment, at their annual do-nothing meeting. What a perfect moment to actually do something.

Could they not release a statement saying that it's worthwhile to dig down and investigate and restore voter trust in the system? Is that too much to ask? They don't even have to choose sides. All they have to do is support election integrity. Don't they care about that issue?

Talk about social justice — what could be more just than ensuring that an entire government hasn't been stolen and all the evil that would follow from that? But, as is always the case with a civilizational collapse, the "leaders" who most need to step up are always missing in action.

A self-absorbed citizenry that gives a pass to self-absorbed leaders can only end in one manner. This is the reality that everyone who cares (the few remaining ones) needs to face. Avoiding reality never works because reality has a way of showing up. 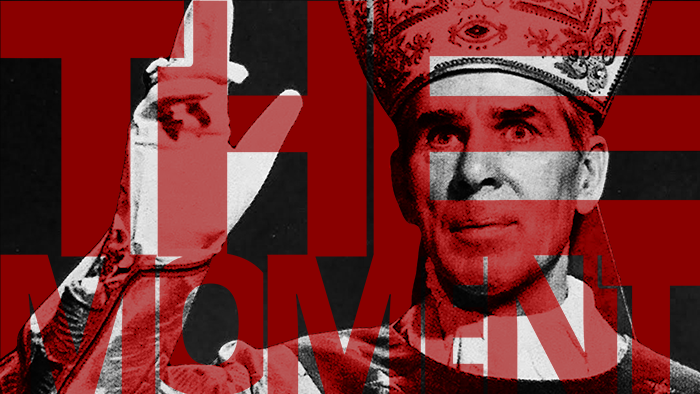 The Moment
Sometimes, one moment reveals everything.