The money is drying up.

But let's not miss this point here — very important — the bishops just hiked taxes. Why? There's only one reason you hike taxes: because you need money. And that raises yet another question. Why? Why do you need more money?

This is the most expansive, explosive economy in living memory, stretching back almost to the 1950s. Judging from all the usual economic indicators, people practically have money to burn. In fact, you'd have to search high and low and turn over every economic rock you could find to discover any bad news. Consumer confidence is at an all-time high, and worker income is increasing in real-dollar terms.

Latinos' and blacks' unemployment rates have never been lower. Housing starts, retail sales, hiring, the stock market — you could go on and on and on. Eight million new jobs created in three years, five million off food stamps and welfare — there is not a single measure you could even point to and say maybe that will go south in a few months.

Catholics are more flush with cash than any time since disco was king.

So unless you wanted to make the insane argument that the economic expansion has embraced everyone in America except Catholics, then the Catholic population is also basking in the glow of this explosive growth. That means Catholics have more money in their pockets as well.

President Trump's 2017 tax cut had already put more disposable income into Catholics' pockets, but then when the economy started kicking into high gear, Catholics — with the rest of the country — were reaping the benefits.

So with all this news — people (including Catholics) more flush with cash than any time since disco was king — why are the bishops standing on the outside jacking up taxes on each other? Are their sheep not sharing their largesse with their shepherds?

Well, no, as a matter of fact. So many have caught on to the fact that the bishops have been screwing them for decades in a thousand different ways that they keep closing their wallets and zipping up their purses. The great ATM cash machine of the laity the bishops have plundered for decades is running out of cash, at least for them.

Money beginning to dry up for the bishops is owing to three major reasons, and each one is of their own doing:

So no matter if you are looking at Catholic money or government money, the jig is up.

But there are two sides of the balance sheet. One is income, as we have just reviewed. The other is expenses, and there the prelates are getting ripped up. It's gotten so bad trying to prop up their superstructure, they're now showing signs of desperation.

Not only are they taxing each other, which puts a whole new meaning to the old axiom of robbing Peter to pay Paul, but there is now the very real issue of being unable to fund pension plans of establishment retirees.

That's right, the very organization that has stolen money left and right from the plate — and paid thousands of employees to be part of it — are now going to steal from the retirement funds of those who worked for them. There is simply no end to their rot. Diocese after diocese will have to start dipping into those funds to meet increasing debts. In fact, it's already begun.

Churches are allowed to short the pension fund. Kind of a 'too holy to fail.'

The archdiocese of Newark, New Jersey is currently embroiled in a lawsuit with employees of St. James Hospital, who accuse the archdiocese of failing to fulfill its pension obligations; and the diocese of Providence Rhode, Island — under the weight of paying $21 million to sex abuse victims — failed to make its obligation to the St. Joseph Health Services pension account. The fund is $125 million short, by the way.

One respected expert in the area of pensions and retirements said the bishops are using their religious exemptions to avoid making their obligations, and you can expect more of this in the coming year. The government allows religious outfits to be exempt from the pension laws which apply to other businesses.

If churches were forced to meet pension fund obligations like businesses are, it might drive a church losing money to be driven out of operation, so they are allowed to short the pension fund if they want. Kind of a "too holy to fail."

Regardless, the bishops are feeling the pinch, and they're going to feel it a whole lot more in the coming year.

Too much debt and mounting every day — bankruptcies, sheltering properties in complex trust funds and shell corporations, not paying pension funds that retirees are counting on to carry them into their old age — there's nothing off the table.

And again, never forget, all of this is because a bunch of homosexual men got into seminary, became bishops, brought in other homosexual men, raped altar boys by the tens of thousands, stole money by the billions, seized operational control of the Church, abandoned the Faith and created a failing bureaucracy that is imploding under its own weight.

Think of all this when your local archbishop makes his phony appeal for the annual archdiocesan financial campaign. 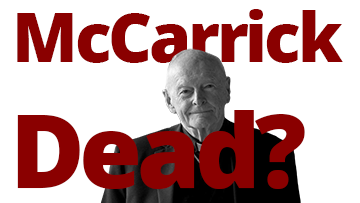