Eternity depends on it.

Why are Trump supporters so upset at the current goings-on? Why are they showing up at state-capital rallies by the thousands, all over the country, angry that this election has gone the way it has?

Why are so many, including Church Militant, descending on Washington, D.C. this weekend (specifically, Saturday at noon) for the "Million MAGA March" at Freedom Plaza to let their grievances be known?

Because they are aggrieved. And they aggrieved because a tremendous injustice has been perpetrated on them.

Massive voter fraud on an industrial scale has been committed through not just ballot harvesting, not just the vote dump in the middle of night, not just the unsupervised counting, but — most importantly — through fraud committed via the computing software assigning the vote tallies stealing from Trump and assigning them to Biden.

Taking something from another that belongs to him or refusing to give a person what is rightfully his comprises an offense against justice.

This would explain why Republicans were dominant everywhere on election night, in every race across the country, on every level of government except the presidential race. This ultimately boils down to a question of justice.

Taking something from another that, by right, belongs to him or refusing to give a person what is rightfully his comprises an offense against justice. Justice is one of the four cardinal virtues and is directed to loving God and man, the greatest and second greatest commandments.

Justice on earth is not a neutral issue. Fallen humanity's inclination is toward injustice — to lying and cheating. Left unchecked, this is how human beings tend. As Bp. Sheen said, God has created another world to correct the injustices of this one.

But that ultimate reality does not absolve us from our duty to do justice in this life. It's why justice must be fought for and fought for hard. To sit out the fight for justice is to suffer eternal damnation.

You cannot say you love God and neighbor and not give to each what is due: Worship to God and human rights to your neighbor. The Marxist Left has created an art form out of dressing up injustice to look like justice. It even co-opted the word (justice) as one of its rallying cries, i.e., "social justice."

The Marxists subvert justice by denying the right to life to the unborn, inverting it into a "right to choose," for example. This is a grievous offense against both God and man. And their list of foul perversions extends throughout the land, executed by fellow travelers in the media, courts, legislatures, higher education and so forth.

In the name of justice, they champion injustice. They desire absolute power to institute absolute injustice. And in the current case of the election theft, they are on the verge of pulling it off. But deep down, within the hearts and souls of men of goodwill, they intuit some foul deed is afoot: A great industrial-sized injustice, the theft of an entire election, the canceling out of perhaps millions of votes, the highest form of canceling that a cancel culture could engage in.

Men of goodwill must join in this fight for justice — it is a spiritual war, something recognized by not only President Trump but also by those in his orbit.

Every single decent man and woman in America must commit himself to justice — in person if at all possible — but unreservedly in prayer. Justice for our nation and Church is the intention of the 9-day novena Church Militant is in the midst of.

Men of goodwill must join in this fight for justice — it is a spiritual war.

By all means please join us live for that novena every weekday at 8 a.m. ET. But also, add justice for the nation and Church to your daily Rosary intentions, specifically praying for justice.

The forces of darkness are on the verge of overwhelming a nation that admittedly has permitted much evil. But as Abraham bargained with the Lord God to spare the city if there were a certain number of righteous men inside, stand up now and be among those righteous men.

Righteous men demand justice throughout the land — in every age, in every place — and they do so because God is just. 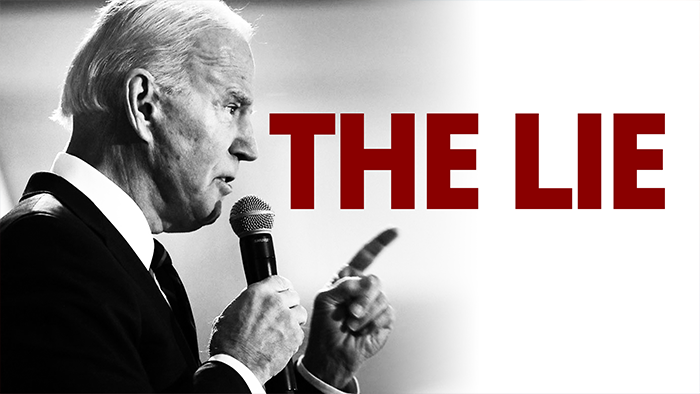 The Lie
It will be proven false.