And everything in between.

The well-balanced Catholic is not only faithful, but also realistic. He understands what comes first, which is those things that come last.

He isn't so swept away in piety that he misses the real dangers in the world, or so caught up in the emotion of charisms that others view him as having his head in the clouds. There are real-world ways of being Catholic and those ways are how the vast majority of Catholics live their daily lives.

One of those ways involves taking a real-world view of where we are as a Church right now in this time and place, an actual assessment and asking tough questions — tough questions because we are in a tough spot.

And the most important question to ask is: Are we first of all taking care of what comes last?

The answer is largely no.

The good news of the Gospel has been compromised by negligence, co-opted for other agendas and polluted for the sake of worldliness. This must first be clearly understood. Many Catholics have been made so spiritually brain-dead that they don't understand this.

Then it must be admitted, and it can't be admitted if they don't first comprehend it. And only when both of these have been apprehended can we proceed to fixing this disaster in every way possible — supernaturally and naturally.

In short, the popular culture expression being "red-pilled" — being awoken to reality — must happen. Catholics, those who are in a delirium regarding the Church's current chaos, must be red-pilled.

For example, we are now going on six months since the news broke that Theodore McCarrick was and is a homosexual predator of teenagers and young men.

And what has happened so far in relation to him? Deceit, stonewalling, lying and a raft of denials by high-ranking Churchmen about prior knowledge. Homosexual clerics and power-brokers in the Church — in the episcopate and lower clergy — must first ensure the evil of their own embrace of homosexuality either in practice or theory — that it never comes out.

The first thing they must do is make sure the last thing that ever happens is you, the laity, learn the truth — that can never happen.

But after decades of this evil among clerics, lots of Catholics are being practically forced to swallowing the red pill, waking up to the reality out of their Catholic naive dreamland.

Even high-ranking clergy are having to admit the first, overriding reality in the Church today that homosexual men have infiltrated the clerical ranks and seized control at all levels. Archbishop Viganò pointed directly to this truth in his first testimony when he correctly labeled it "a homosexual current" within the Vatican.

Cardinal Raymond Burke has come out with it publicly. Even Cardinal Müller in Rome admitted it a few days ago when he said, "a homosexual network, was able to wreak havoc in a mafia-like manner in the Church," referencing the whole McCarrick mess.

Cardinal Brandmüller, likewise, has spoken of the evil of homosexuality within the ranks of the clergy. Polish priest Fr. Dariusz Oko, commissioned to study the question by Polish bishops in 2012, put together an extensive report of his findings and called it exactly what it is: the homoheresy.

For Catholics who have been sleepwalking through all this, unaware of the massive danger to souls, this might be a lot to ingest all at once. Yes, it is — it is a horse-sized red pill. Suck it up, buttercup, this is the reality.

All week, we've been asking you to support our expansion campaign because Church Militant was among the first apostolates to put this truth — this red pill — squarely before Catholics. The homoheretics, the homolobby, the homosexual current in the Church jumped ugly on us almost instantly.

Gay and gay-friendly bishops banning us from speaking, pretending it was a hundred other reasons why. But we knew why back then, and we all know why now because we have outed them.

Father James Martin, Fr. Thomas Rosica — two of the frontline shock troops of the homoheresy in the Church — and their supporters in the episcopate — dozens of them — those who accuse us of speaking impolitely — things that should not be said in polite company.

Our own archdiocese of Detroit, notorious for being the epicenter of the homoclergy world, did everything to crush us in our early years — they lied privately and issued deceptive press releases publicly. They called other dioceses behind our backs.

But this is how the homo-mob in the Church works. They destroy the Church. Do you think they would give a second thought to destroying a person, or a group of people?

Church Militant, which, again, is asking for your support to fight this evil and its many consequent follow-on evils, was among the first to shine the light on this through multiple investigations and special reports.

For years, we've exposed how many of the so-called "professional Catholic media" have been complicit in all this by refusing to publish any of these stories which they knew about, forgetting that one way or another, the truth always comes out.

Well, now the big red pill has been jammed down the throats of many Catholics. Even wealthy Catholics, who have spent years hobnobbing with senior clergy and forking over millions of dollars, are now waking up as they begin to digest the red pill and have their eyes opened as well. That needs to happen much more.

This kind of dedication, what we here at Church Militant do every day despite attacks even from the Vatican homosexual current itself, specifically last summer, this dedication deserves your support.

Not so we can get rich, but because as the truth of all this comes out — it has become clear that it will take a massive concentration of resources to defeat this homoheresy which has fastened itself onto Holy Mother Church.

We were among the first to bring this to light and we aren't going to stop now. This evil — and all the evils which follow in its foul wake — is obscuring the minds of too many Catholics, diverting them from the last thing, which is Heaven.

If Catholic laity have one single role, it is to do everything in our power to convince anyone who will listen of the truth of the Catholic faith and blow up every obstacle in their path. This is why Fr. James Martin has flat out refused to sit down in a straight-up debate with us, even ignoring calls from Fox News to sit down with me on the air.

He knows his position is a pack of lies from the Father of Lies, and he has no desire to be exposed. Well, there's more than one way to skin a cat. Father Martin has access to all kinds of resources through the gay Jesuits, and let's be honest, for that is what that order has become.

He travels all over the country shoving sodomy down everyone's throats and saying it's a gift from God, and if you don't accept it, then you are mean. But because Fr. Martin, who seminarians tell us admits to them he is homosexual in private talks, because he pushes this evil, he brings in a boatload of other evils as well.

And sadly, Martin is just the tip of the iceberg. He is supported by a whole network — an octopus is what Viganò called it — of Catholic leaders who don't know the first thing about being authentically Catholic.

Church Militant didn't ask for this fight. It was brought to us once we saw the evil. But now that we are in it, there's no way under the heavens that we are going to back down from it.

Join us in this. That money you were going to give to the diocese or the cardinal's special project or the Jesuits or whatever cause that would use it for corrupt ends, give it to us instead.

The first thing is the salvation of souls, which is also the last thing as well as everything in between.

If you don't live, breath and teach that single point publicly, boldly, constantly and loudly, then you aren't really Catholic, and you certainly do not deserve Catholic money. Go call George Soros instead.

For everyone else, please donate to our expansion campaign today, and thank you in advance. 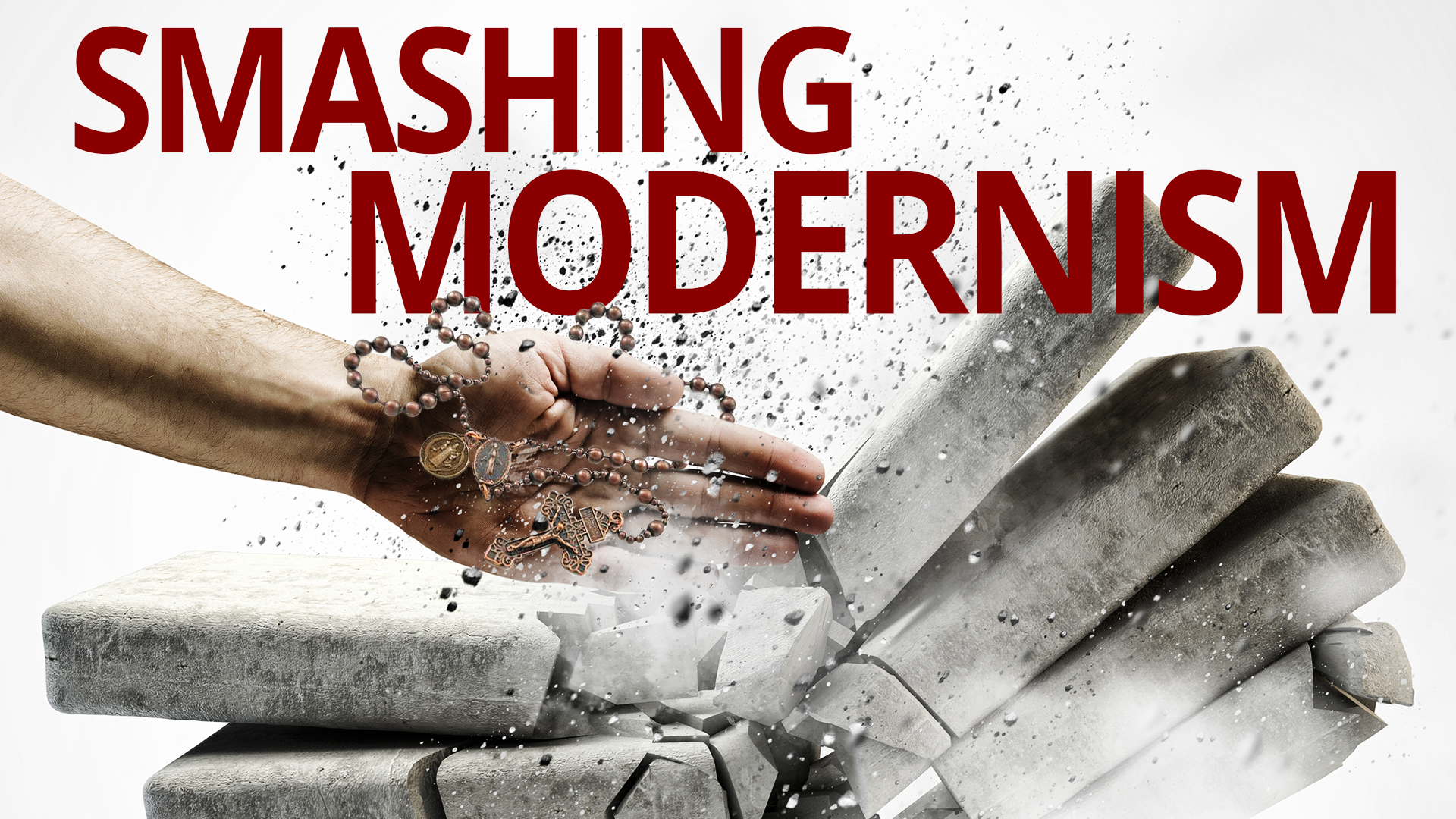 Smashing Modernism
It must be done.