Before we begin, I'd like to make just two quick points.

First, as a reminder, we pray Morning Prayer and the Rosary immediately afterward each workday at 8 a.m. ET as well as evening prayer at 4:45 p.m. ET. We hope you can join us.

Second, we're hiring for six different positions. They're listed on the jobs page. If you or somebody you think of are interested, please send in an application.

Now, on Good Friday, the racist governor of Virginia — remember old Blackface that the Marxist Media completely gave a pass to because of his love for abortion ... that guy? — well, he came through for the Marxists with flying colors on Good Friday, signing into law a massively extreme abortion law. Yes, he did it on Good Friday.

His action was condemned in a "strongly worded statement" by Virginia's two bishops, Michael Burbidge of Arlington and Barry Knestout of Richmond.

We'll get back to that, but for the moment, here's another blast from the past: Remember the war over the "death panels" in Obamacare? Well, Canada has taken it a step further, now actually forcing facilities to kill patients or be shut down. In 2016, Canada gave the thumbs-up to euthanasia, and almost overnight, various health ministries in the nation's 10 provinces started instituting rules for hospices to provide for medically assisted suicides.

The British Columbian government, who are all socialists, pulled $1.4 million from the hospice because it refused to allow euthanasia.

In British Columbia, the health ministry is taking aim at one small center called The Irene Thomas Hospice located in the town of Delta. A questionable interpretation of some "guidelines" — not a law, guidelines — is allowing for Health Minister Adrian Dix, a self-proclaimed Catholic, to force the facility to close because, bottom line, it refuses to kill some patients.

Now that was all good back in the day, 10 years ago. But once the Canadian government became pro-death, the hospice's fate was sealed. The British Columbian government, who are all socialists, pulled $1.4 million from the hospice because it refused to allow euthanasia.

Now, in less than a year, once the mandated time for cancellation of funding has expired, the government will simply step in and take control of the facility because it's sitting on land owned by the government.

Angelina Ireland is president of the Delta Hospice Society, which runs the Irene Thomas Hospice.

"This is stone-cold communism. You have defied the government. You are no longer allowed to exist, and they will now take your assets," she said.

When fake Catholic Dix approached Ireland and instructed her that they needed to start providing for so-called medical assistance in dying (MAid) — a PC euphemism for actively killing patients who asked for it — she said "No." It was then that Dix said the funding would be cut off, and after that mandatory one year, they would no longer be classified by the Health Ministry as a hospice since the government was taking away the designation and the funding.

The coming change in designation will, therefore, constitute a breaking of the land lease, since it was granted for use by a hospice. But since it won't be considered a hospice anymore, then they have to vacate the land. Of course, unless they pick the buildings up and take them somewhere else, the government just swoops in and takes the buildings that just happen to be sitting on the land. It's a very clever sleight of hand.

It is the British Columbian government, through its Health Ministry, Fraser Health Authority, that changed the terms of the lease by redefining what a hospice is, which must now include helping patients kill themselves.

In 2006, Pope Benedict XVI equated palliative care — which is what a hospice does — with "the preservation of human dignity," and he defended the provision of care to the sick as a human right.

When Ireland told Dix they would make up the government funding with private donations, he showed his true colors. It wasn't really about the million or so bucks — never was — it was about driving them out of business because they refused to accept euthanasia. He essentially told her to drop dead — that the government didn't care if they made up the money or not. Their designation was going to be pulled one way or the other and that was final.

A nation can vote its way into socialism. But it inevitably has to shoot its way out.

The law says a year has to go by with no funding, no partnership — and at the end of the year, the designation of hospice can be dropped.

The other "hospices" in B.C. that the government has no problem with — they help patients plan their own death parties, plan the music, the buffet, the guest list, everything.

On top of everything, in the midst of the Wuhan virus, the government is now harassing the hospice, demanding plans on how the hand-over will take place. The Delta Hospice Society, which runs the Irene Thomas Hospice, has until February 2021 to figure out how they can keep their hospice. Their website to save the hospice is now up and running, which you can visit to learn more and even help. Just click on the provided link.

This is the face of socialism. The state runs everything and individuals have no rights, no say, ultimately no dignity. A nation can vote its way into socialism. But it inevitably has to shoot its way out.

This brings us back to the bishops — all of them. For decades and decades, the U.S. bishops have allowed millions of Catholic politicians to move down the road totally unchallenged — to total acceptance of abortion, and as we see now, abortion in the extreme.

But a huge number of bishops have more than just kept silence and allowed "abortion creep." They have actually supported these politicians — registered Democrat bishops — they vote for them. They promote them and their Party of Death.

So to now appear shocked that socialist, Marxist, commie baby-killers are becoming brazen is akin to being surprised that a cake comes out of the oven after you go out and buy the ingredients, mix them all together in the bowl, pour the batter into the pan and place it in the oven. How could you possibly be surprised that a cake pops out?

Dear Lord, do all these bishops have to answer for a lot when they die! How they aren't terrified of meeting Christ the Judge is unfathomable. 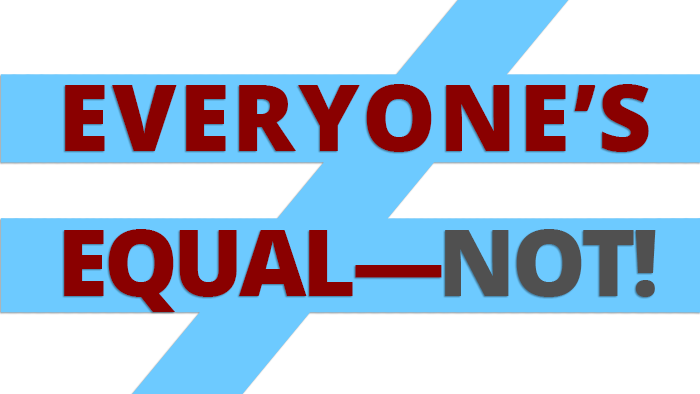 Everyone’s Equal — Not!
Not even in Heaven or Hell.