The change must be Catholic.

I'm coming to you from Gettysburg, Pennsylvania, where the famous battle was fought during this nation's Civil War. The fate of the nation, as a united nation, really hung on the outcome of this battle, as Pickett's forces marched across the field to attack the Union forces on Cemetery Ridge.

We're here because the fate of the nation once again is in the balance, some believing it may already be determined and lost. How did we get to the point where we are now? The ultimate answer is quite simple: There are foundational problems with America.

One of those problems resulted in the massacre and tremendous loss of life right here in Gettysburg. But the foundational problem now laid bare is of a different magnitude and kind.

America was founded on political principles that, when carried to their extreme, allow for the defiance of the natural law and for the political order to revolve around a rejection of the good and true, if enough citizens desire that.

Well, the question of cheating itself aside, it is now clear that too many Americans have, in fact, chosen to reject the good and the true.

This has been true all the way back to the Garden of Eden, but here's the rub: The U.S. government foundationally accepts that a citizenry is free to do this if a majority choose to.

There are foundational problems with America.

So what happens to a nation, a society, a country when truth itself is rejected? And not just rejected but enshrined in law? That nation will be laid to rest.

There is, for example, too much of an acceptance on the part of even good people that everyone should enjoy the right to free speech. Really? Seriously? Everyone — regardless of their opinion or declaration? Well, no, comes the response: You cannot yell "fire!" in a crowded movie theater. But you can stand up and advocate for the slaughter of tens of millions of children?

You can express an opinion that a child can be administered puberty-blocking drugs behind the backs of his parents on the way to being castrated and mutilated? There's no need to go through the exhaustive and exhausting list of natural moral evils.

Our founding documents speak of "nature's God" but offer no authentic philosophical touchstone to ground ourselves in as a nation when the tough decisions come. The country, like most of the Western world, lived a moral life based on the teachings of the Catholic Church, whether it practiced the Catholic faith or not.

This was true in America. Up until the mid-20th century, divorce was greatly frowned upon, premarital sex of any sort was not accepted and shattered families were so rare that the idea was never really considered. Killing your child was abhorrent. All of this and much more would never have been allowed to be lobbied — free speech or not.

Some things were considered simply beyond the pale, and censorship was highly and rightly employed. Yes, some ideas and philosophies are destructive and should be banned.

While sometimes an evil must be temporarily tolerated to avoid a greater evil, the door should never simply be opened and evil invited in. But that is exactly what the founding principles and documents permit.

Societal disdain and scorn at evil behavior only work for a while if the evil is constitutionally protected. Sooner or later, human nature — fallen human nature — will kick in, and the descent will commence. Human nature unassisted by grace will end in ruin.

That is the fundamental shift that needs to happen in America, or, like every other civilization, it will follow to its natural end. Human nature, by its nature, is destined for Hell in eternity but, along the way, will build its own hell here on earth.

This is why humanity is in need of a Savior: because it is incapable of saving itself. A person cannot give what he does not have, and that's most especially true of himself. Salvation must emanate from outside because it does not reside naturally inside.

The failure to understand this is what ends a nation. The founding documents have a hint of this truth that God is the ultimate, but, in the end, it is not fleshed out enough. Humanity is given too much credit and God is not given enough.

And to be clear, by God we don't mean just some tip of the hat to some "divine benefactor" or just "nature's God." We mean the Holy Trinity and the Second Person of that Trinity, the Eternal Logos, Jesus Christ. But even that is insufficient on its own.

The Protestant revolt of the 16th century set the stage for the corruption of a true understanding of Christ as presented by the Catholic Church established by Him. The God-given rights of man exist only to allow for man to come to the fullness of truth, and that means Catholicism — not a plurality of contradictory religions and mistaken notions and errors that happen to enjoy legal protection.

Free speech gets reduced to the godless using their freedom to bring yours to an end.

Just because something is legal does not make it right. Freedom and liberty are not ends in themselves. They are directed toward a free-will choice to embrace truth, and this is the only reason for their existence. It is the eventual rejection of all this that has brought the nation to its knees and very likely to its end.

The men who died here in Gettysburg, those first few days of July 1863, died for a nation with the potential to realize these truths and move toward them. It was this nation conceived in liberty and dedicated to the proposition that all men are created equal that could have been the one that would not perish from the earth.

However, it was not to be because when the push came to the shove, despite all the good intentions and references to divine authority, the fullness of truth was not pursued. Free speech was incorrectly understood as not having any necessary connection to ultimate reality, and free speech gets reduced to the godless using their freedom to bring yours to an end.

That is not what "those who here gave their lives that that nation might live" died for. Abraham Lincoln delivered his famous address here 159 years ago this coming weekend.

Given the current crisis, his last lines bear reflection: "We here highly resolve that these dead shall not have died in vain, that this nation, under God, shall have a new birth of freedom, and that government of the people, by the people, for the people, shall not perish from the earth." 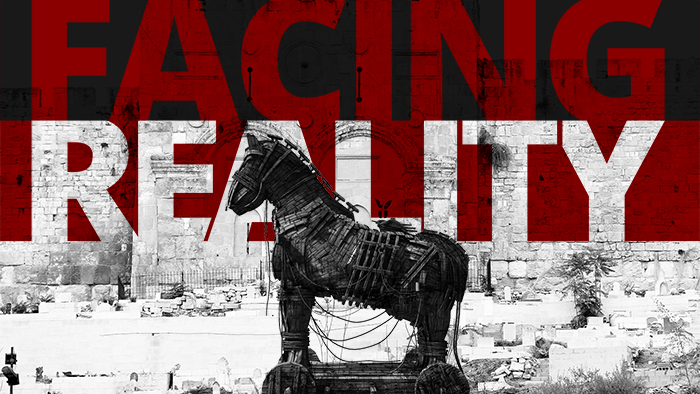 Facing Reality
Sooner or later, you have to.