Fr. Martin — Enemy of the Pope!

And he's not alone.

Father James Martin is an enemy of the Pope — publicly slamming Pope Benedict back in 2010 with rhetorical and nonsensical questions in response to Pope Benedict saying abortion and same-sex marriage were insidious threats to humanity. Here is specifically what Pope Benedict said at Fatima on May 13, 2010:

I express my deep appreciation for all those social and pastoral initiatives aimed at combating the socio-economic and cultural mechanisms which lead to abortion ... Initiatives aimed at protecting the essential and primary values of life, beginning at conception and of the family based on the indissoluble marriage between a man and a woman, help to respond to some of today's most insidious and dangerous threats to the common good.

That clear and non-confusing statement got stuck in Fr. Martin's throat, and he could not restrain himself responding in the Jesuit rag America Magazine, calling the Pope's words bizarre, against Catholic teaching and against the Gospel:

Pope Benedict XVI's comments last week in Fatima, Portugal, in which he stated that abortion and same-sex marriage, were 'some of today's most insidious and dangerous threats' to the common good seemed oddly discordant. The equation of abortion, something that clearly is about a threat to life, with same-sex marriage, which no matter how you look at it, does not mean that anyone is going to die, is bizarre.

"Why aren't 'abortion and war' the most 'insidious and dangerous' threats to the common good? The great danger is that this increasingly popular equation will seem to many as having less to do with moral equivalency and more to do with a simple dislike, or even a hatred, of gays and lesbians.

"And that goes against not simply Catholic teaching, but against the Gospel..."

This is a favorite tactic of heresy lovers. They slam the tradition of the Church and feel no qualms about publicly attacking the Vicar of Christ — his words are "discordant, bizarre, against Catholic teaching, against the Gospel," seriously? Likewise, Pope Francis has openly condemned same-sex marriage numerous times, calling it "demonic" and saying "we do not joke around with truth." The current Holy Father also offered his public support for demonstrations in Mexico against same-sex marriage back in late 2016.

So where does Fr. Martin, homosexualist Jesuit, come off denouncing the popes? In so doing, he has made himself an enemy of the pope. He tries frequently to turn people against the teachings of the Church, hiding behind theological hair-splitting. None of that hides the reality that he has established himself as an enemy of the pope — not just Francis, but also Benedict, as well as John Paul. That's a pretty solid alignment to attack, Fr. Martin, to call the Church's teaching as enunciated by the popes bizarre, against the Gospel? Seriously?

Judas was an apostle until his treachery caused him to lose his apostleship as St. Peter tells us. Why should anyone be shocked by the Fr. Martins and the Cdl. Marxs of the world? Their line traces straight back to Judas himself. Yet such is the state of affairs in the Church these days — treachery, deceit, malfeasance on the part of a few influential types and near complete silence on the part of those who know better but will not speak for fear of messing up their ecclesiastical careers. They have more fear of men then they do of God.

One of the great puzzlements in this particular age in the Church is whether bishops and cardinals, who allow these evils to continue unchallenged, actually believe their own silly preachings. For example, do they really believe all religions are pretty good, and there's not that much of a difference between them, at least not enough to ever talk about why the Catholic Church is the only means of salvation? We could also ask the same questions of those who peddle the stupidity that we have a reasonable hope that all men are saved. Do they really believe that non-Catholic nonsense? Or are they just afraid of the consequences of telling the full truth, and so they hide behind this doublespeak and so forth? If they don't reverse course publicly, it won't matter if they actually believed it or not. They will join Judas.

Father Martin is an enemy of the pope — period. He must be called out for that by superiors and prelates or they run the risk of creating grave scandal among the faithful or better stated even more grave scandal. All of this matters not as some list of talking points or winning some debate points but because all of this influences the final destiny of souls. But see, it isn't clear at all if many of the clergy, most especially many members of the hierarchy actually believe that. They never speak in those terms. They only ever speak in terms related to earthly matters. In fact, it seems the only time Hell ever comes up is to say that we have a reasonable hope no human is in it.

The progressives and modernists and heretics and dissidents in the Church have been able to reset the terms by which the Truths of Jesus Christ are spoken of. They have drained them of their spiritual realities and replaced them with the concerns of mere man. They are leading souls to Hell by their silence and by their machinations. This is about eternal life; those are the stakes here, and these shepherds who allow heretics and enemies of the pope free access to the faithful will suffer their same fate if they don't turn back now.

Fr. Martin is an enemy of the pope. The modernists like Cdl. Wuerl of Washington D.C. and Blase Cupich of Chicago were very quick to throw that charge around when millions of the faithful were weirded out by what was going on at the 2014 and 2015 Synods on the Family in Rome. But, here, we have a priest, Fr. James Martin, openly criticizing and ridiculing the pope's words, and he gets a free pass, well, until he dies that is if he doesn't repent. 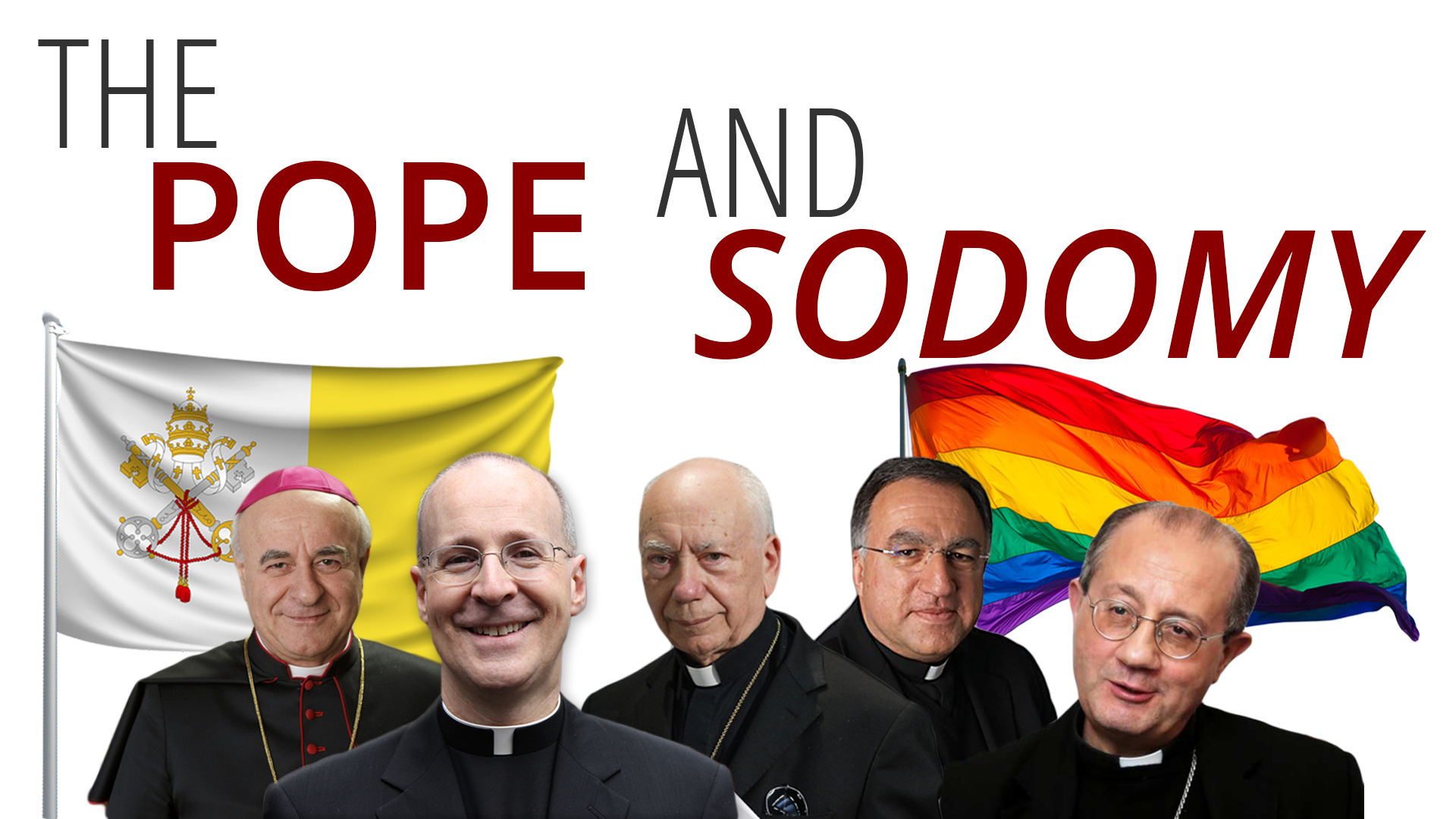 The Pope and Sodomy
Time is running out.