He has drunk all the Kool-Aid.

It's become quite apparent that in his admiration for establishing a one-world government administered by a new world order, America is an object of hate for Pope Francis.

The handwriting was on the wall at least two years ago when yet another article from Eugenio Scalfari revealed that the pontiff has so little regard for the United States that he actually thinks we should simply give up our national sovereignty and submit to a new world order.

Maybe the Dems can nominate Pope Francis for their party's candidate for president. He can assume presidential powers and then dissolve the U.S.A. After all, it seems like he's got experience doing the same thing with the Church.

The old atheist Italian journalist says that in 2017, Pope Francis called him shortly after the G-20 summit and demanded to see him at four o'clock that afternoon. According to Scalfari, Francis had become agitated about the United States and other nations commanding such power in the world.

Pope Francis told the Italian newspaper La Repubblica that the United States of America has "a distorted vision of the world," and Americans must be ruled by a world government as soon as possible, "for their own good."

Now that's an incredible statement to make, and as the article continued, the disrespect for the idea of national sovereignty mounted. European nations also came under the papal displeasure: "I also thought many times to this problem and came to the conclusion that, not only but also for this reason, Europe must take as soon as possible a federal structure."

Somewhere, somehow, he has in his head that the idea of individual nations is bad because that translates into immigrants being mistreated, and among rich nations — the First-World nations — poverty escalates and the poor are taken advantage of.

That's what he thinks, and so the solution for him is to introduce a one-world government, ruled by a single new world order, so all immigrants can get a fair shake out of life.

Last week the reports came out that Pope Francis thinks national pride, touted by political conservatives, is the beginning of Nazism reappearing. He said to an international group of specialists in penal law: "And I must confess to you that when I hear a speech [by] someone responsible for order or for a government, I think of speeches by Hitler in 1934, 1936," adding, "They are inadmissible behaviors in the rule of law and generally accompany racist prejudices and contempt for socially marginalized groups."

"It is no coincidence that in these times, emblems and actions typical of Nazism reappear, which, with its persecutions against Jews, gypsies and people of homosexual orientation, represents the negative model par excellence of a culture of waste and hatred," he continued.

Pope Francis has drunk the Kool-Aid of the Left.

So there it is, perfectly framed by this pontificate: Immigrants and homosexuals need to be protected classes, and sovereign nations must give way to those who do not respect borders and those who reject natural law. And nations, now bordering on embracing Nazism, must surrender their independence because it is the will of God. For their own good, the nations of the world, especially the powerful ones, must pass out of existence, surrender themselves and abolish their borders for their own good.

When Americans are chanting "USA!" at sporting events or political rallies for Republicans, in Pope Francis' head, that apparently rings as Sieg Heil!

This is dangerous, dangerous stuff. For the occupant of the throne of Peter to be outwardly demonizing nations — especially the leading nation which defeated the Nazis — as Nazis themselves, a line has been crossed from which there is no coming back.

To then turn around and underscore that part of what makes a person a modern-day Nazi is to not go along with the homosexual agenda and resist the evil, this is beyond the pale and must be called out.

Pope Francis has moved into territory that no pope has ever transgressed. He is transferring the mission of the Church from the salvation of souls to the foundation of a one-world government.

What precisely the role of the Church itself would be in that new world order still seems vague, but one thing is clear. Francis never criticizes Islamic nations. He never tells them to clean up their act and stop throwing homosexuals off roofs. He never has a word of criticism for their brutality of FGM (female gential mutilation) or sponsorship of world terror, or torture or forcing people in their nations to convert or have their heads cut off.

Yet he has no problem with hiding behind the Italian military surrounding the walls of the Vatican, protecting him from that same Muslim threat.

This pontificate is a political disaster, one gone completely off the rails.

Serious questions need to be asked about all this: homosexual men, many of whom are either abusers or covered up abuse placed into powerful posts; the theft of hundreds of millions of euros; constant lies and denials of repeated press reports; and multiple appointments of enemies of Christ to high-visibility positions within the Church. And now hurling accusations at political conservatives that their love of country makes them "Nazis," and opposing the gay agenda means conservatives want homosexuals marched off to gas chambers.

This is outrageous. Francis hates America because America represents everything his twisted political worldview stands in opposition to.

This increased marxist view has been brewing in the Church for decades, and far from being ascendant is now practically the status quo. Love of the homosexual agenda, illegal immigrants, the abolition of nations and Islam's "favored son" status is what Francis will be remembered for.

The Vatican has yet to comment on the Scalfari interview about Francis reportedly saying America should willingly surrender itself to a one-world government. And actually, no comment is needed. We've heard enough. 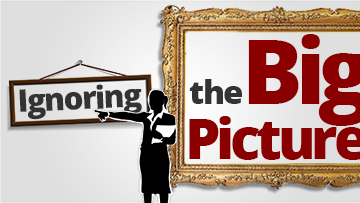