(This Vortex was recorded before news of Lewis' demotion at Franciscan University of Steubenville.)

Before we begin, a caution: This Vortex contains some very disturbing and blasphemous quotes from a novel assigned to students at Franciscan University in Steubenville.

So the question has to be asked: Based on a string of recent developments, is Franciscan University in Steubenville turning bad?

There is precedent — lots of it, unfortunately — for Catholic schools going belly up on the Faith. My own alma mater, Notre Dame, being the most obvious, but by no means the only one.

In fact, the overwhelming majority of Catholic colleges and universities are now actively hostile to the teachings of the Church, so a little forensic analysis of what happened in the past can be very instructive looking at the present.

None of the abandonment of the Faith happens in a day. It begins with a small thing here or a couple of small things there. And sometimes, it's just one or two people in very key positions which begin to bring in the rot.

So now let's shift our attention to the case of Franciscan. Like Notre Dame, a new president arrives and begins a series of hires. The relatively new president at Steubenville is Fr. Sean Sheridan. Sheridan was hired by the university's chief operating officer, William Gorman. Gorman enjoyed a professional relationship with Donald Wuerl, working for him for years in D.C.

Numerous sources at Franciscan tell Church Militant that Gorman has been brought in by Sheridan to liberalize the school, and part of that includes keeping or hiring new liberal-minded faculty. One of those professors, who is chair of the English Department, is Dr. Stephen Lewis.

Last academic year, he assigned his students a mandatory book called The Kingdom: A Novel. The author of the book, Emmanuel Carrère, is an atheist. Carrère's book is a collection of his personal musings about various figures in the early Church.

We'll stop there because it's filthy, not to mention blasphemous, but you need to know that he continues with his thought and strings it out further, much further — enough said.

Folks at Franciscan were outraged that Lewis would assign that kind of material at a Catholic university so they contacted Church Militant. So we reached out to the school and asked them about it.

They replied with a somewhat lengthy statement that could be summed up as: "We uphold Catholicism, but we want our students prepared to go out in the world and deal head-on with tough challenges."

Well, that may all well and good, but seriously? How many times does the topic of this involving the Blessed Mother come up? Who even thinks like this? In what sick minds is this topic even a question or notion? And even if the topic was all the rage "out there," why would a student have to read a graphic, pornographic, blasphemous treatment of it to argue against it?

That is a weak defense, not really a defense at all in this specific case, which is what Church Militant was inquiring about. The university, to be clear, officially defended this book being mandated to students in Lewis' class. That's beyond pitiful; it's sick — the promotion of reading material with not just blasphemy, but among the most shocking, disgusting sort of blasphemy you could really bring up.

Franciscan has started to drift for a couple of years now. There is an internal controversy over the exact nature of a proposed "diversity committee," for example.

Some are very worried that despite official denials, Gorman is quietly working on plans to slowly introduce a more accepting LGBT environment on campus. In 2017, there was the blow-up over the case of Rebecca Bratten Weiss, an adjunct faculty member in Lewis' English Department.

She was dumped by the university when it was exposed she is a pro-choice feminist, but not before a great PR storm engulfed the school. For the record, she also gave students reading assignments with pornographic content.

How do people like this get on the faculty? That's an important question. Why are they either allowed to remain until the heat gets too much or, in the case of Lewis, given no reprimand?

This man assigned students at a Catholic school mandatory reading discussing sexual practices of the Mother of God in pornographic detail.

And then, when queried, Franciscan defended the book and the professor.

Well late last week, owing to the flood of calls and threats to cut off donations which resulted from the Church Militant coverage, Fr. Sheridan was forced to issue a personal letter of apology where he said the book "is so directly pornographic and blasphemous that it has no place on a Catholic university campus."

True — he then said he "regrets the university's earlier statement did not make this clear."

While this statement from Fr. Sheridan is a good start, it is massively insufficient.

First, it is disingenuous to portray the earlier statement as not being more clear. The earlier statement did the exact opposite. It defended the book and the professor. It did not even mention the notion of pornography, presenting an occasion of sin to the students and most especially the horrific blasphemy.

The statement cruised right over those points, never even bringing them up. So Fr. Sheridan is intentionally mischaracterizing the nightmare of a statement.

Secondly, and more to the point, he sort of defends Lewis assigning the book, making the judgment on Lewis that he did not "intend to scandalize."

First of all, he has no way of knowing if that's true or not, but it's neither here nor there. Lewis needs to be fired — period — immediately. Anything else is unacceptable.

Sheridan admits that the book is scandalous, pornographic and blasphemous — his words. If he has a professor on staff who demonstrates such a horrible lack of judgment, then that professor needs to go — period.

Yet Sheridan never breathes a word about any disciplinary measures against Lewis, leaving all concerned to believe there will be none, that he is off the hook because he didn't "intend" to create scandal.

But intend to or not, he did, and intentions aside, some actions are simply immediate disqualifiers. If a politician used the "N-word" and didn't intend to be insulting, it doesn't matter, he's got to go.

Lewis mandated a blasphemous pornographic work about the Blessed Mother for his students. He created a firestorm for the university. The PR department — which also needs to be replaced — defended him and the book.

The president is then forced to publicly apologize, reverse the earlier statement and quell a protest among donors. In what world does Lewis seriously get to come back and teach?

A massive lack of judgment — intended or not — is just cause for firing, and it should be. If Sheridan keeps Lewis on or not, if he does not make immediate changes in the PR department, those things will tell you all you need to know.

Was his emergency statement just something to put down the revolt among donors, or was it genuine?

If it was genuine, then action must back up the words. Lewis and the PR guru who produced the earlier statement — Tom Sofio — need to be gone before the sun sets. No one gets to make those kinds of mistakes, intentional or not, and keep their jobs — period. Some actions are automatic disqualifiers.

Any parent considering spending money for a Catholic education at Franciscan better take a long, hard look at the direction the school is going.

How Sheridan acts now will tell you everything you need to know. A statement is not enough.

Read more about this story here. 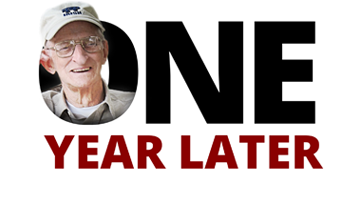 One Year Later
Hard to believe...