Nothing 'fresh' about it.

For years, Church Militant has been sounding the alarm over the horror of homosexuality in the ranks of the clergy. Nobody in the Catholic establishment media has uttered a syllable about it unless and until some single aspect of it breaks through as a stand-alone story, usually from either criminal charges being filed or a civil lawsuit that gets reported by the secular media.

So it was more than a little weird to see a headline late last week from the National Catholic Register that read, "Clerical Misconduct on 'Hook-Up' Apps Poses Fresh Challenges for Bishops." While accurate on its face, there is not a single thing fresh about the underlying issue.

Frankly, why does it matter if homosexual clergy are using an app or a rent-a-boy 1-800 number or carrying on with each other? The issue isn't the means by which they connect, but that they connect in the first place.

The people making the decisions know the current condition of the Church but refuse to disclose it to you in any meaningful, actionable way.

The issue of bishops, some of whom are gay themselves, is the gay sex, not how they meet. How is it that this is such an issue? That is the question, not the phone app they use. And that is the question that bishops are not only massively adept at dodging, but they also have enablers in Catholic establishment media.

If you've been following Church Militant for some time, you will recognize this theme as one of our recurring themes: the distinct lack of integrity among Catholic establishment media. They have been grossly derelict in the category of sins of omission. Much of what they write about is fine and good and all that. But to be pointing at the beautiful floral arrangements and statuary in the sanctuary while the Church Herself is on fire is a complete abdication of their professional responsibility.

The Catholic establishment media is essentially controlled by the bishops. Period. Catholic News Service (CNS), for example, actually has its offices in the USCCB building in Washington, D.C. and serves as little else than a public relations outfit posing as news.

But other outfits such as EWTN, CNA and the National Catholic Register are all owned and operated by the same people and are simply not reliable when it comes to informing you on what's really going on in the Church. True, they don't publish out-and-out lies like National Catholic Reporter or America Magazine, but in many ways that makes them even more dangerous. Non-heretical Catholics read these publications and watch their milquetoast coverage of events and walk away totally uninformed of the actual reality, while also thinking they have learned something. They haven't.

The editorial decisions of this monolith of feel-good Catholic news are a detriment to the current situation Catholics face. And here's one horrible part of this: The people making the decisions know the current condition of the Church but refuse to disclose it to you in any meaningful, actionable way. They simply stay away from a certain set of stories that will tick off the bishops — namely, corruption within the episcopal ranks.

Only when a story gets out of the bag do they then spring into action, like this latest story, but even here, where is the larger discussion of the underlying issue? Who cares that clergy use Grindr? What we care about and have every right to be informed of is that they are having sex with each other and/or strangers with great frequency.

The Catholic establishment media fell completely in lockstep, for example, back in February of 2019 at the much-ballyhooed but completely worthless Rome sex summit, a three-day affair where absolutely nothing serious was allowed on the agenda. Cardinal Blase Cupich was dispatched by Pope Francis to ensure that the question of homosexuality within the clerical ranks never came up, and there was barely a peep from the Catholic media.

How this group goes to sleep each night with a clear conscience is beyond me. They are facilitating the evil in the Church by their constant sidestepping of the issue. And then when the occasional moment does in fact arrive where they are more or less forced to pen a column, it's always a monumental example of deflection. They find some secondary, tertiary or even academic issue to hone in on, deliberately avoiding the pink elephant in the sanctuary. Whether they are actually ordered by bishops to avoid that topic or they simply understand they should not bite the hand that feeds them, they refuse to write stories that discuss this in any meaningful way.

For example, with the whole question of the gay seminarian pipelines set up by Bernardin, McCarrick and Henry Mansell back in the 1980s and 1990s in Chicago, New Jeresy and Buffalo, respectively, it was Church Militant who broke that news, not them. During the Roman sex summit, it was Church Militant who was asking why Cupich was refusing to allow discussion on homosexuality or McCarrick, which was the entire impetus for the Summit.

In the case of Bp. Michael Hoeppner of Crookston, Minnesota (the first bishop in the world to be dumped from office under the pope's new rules), it was Church Militant who broke that story and followed through with it — not the Catholic establishment media.

The Church hierarchy is crawling with gay men. The Catholic establishment media know this and keep very quiet about it. Where are the groundbreaking reports on McCarrick? McCarrick as well as Bernardin populated the hierarchy, priesthood and seminaries with thousands of gay men over the decades, and, over those decades, many of them rose to great heights within the Church. Where are all the stories on this? They can't possibly claim to not know.

Our studio here is so inundated with these tips and information, it's impossible to keep up with. And since many of the leaders of the Catholic establishment media are in so tight with the bishops and their aides and personnel, they know much, so where are the stories? The real stories.

Because they appeal to a somewhat conservative audience, they are content to write stories on the big level, such as what this cardinal or that has to say about the culture or the latest oddity coming out of the Francis papacy. But here on the ground where all those stories originate, not a word. Pope Francis didn't just drop out of the sky. He was incubated in a malformed episcopate where so-called social justice supplanted doctrine.

The $4 billion (and counting) sex abuse scandal didn't suddenly arrive out of the blue, and the fact that bishops are doing a somewhat better job with minors being raped by clergy does not mean there should be no stories on priests and bishops sodomizing each other and the massive damage being done to the Church because of it.

Here's the bottom line: If you wish to get sanitized information so as not to disrupt your peaceable and delusional view of the Church and the evils that beset Her from within, then continue going to the Catholic establishment media. They are the extreme professionals at putting lipstick on pink pigs.

But if you want to actually know what's going on through in-depth exploration, further probing and concomitant questioning and investigation, then come here to Church Militant. No bishop, cardinal or pope orders us as to what we can and cannot report on.

Unlike the Catholic establishment media, our focus is strictly on souls. Period.

Unlike the Catholic establishment media, our focus is strictly on souls. Period. And even though they deflect from the whole truth, it's interesting that more and more they are being forced to have to report (kind of) on the very events Church Militant has been doing for years.

Even though a number of them individually are journalists, even good ones, the environment of being beholden to the bishops prevents them from pursuing the type of stories and raising the sorts of issues we do here at Church Militant. So the very reasonable question arises: Why would you watch, read or listen to them, and why would you give them any money?

They don't tell you the real story. They don't exactly lie, but they aren't completely honest either. 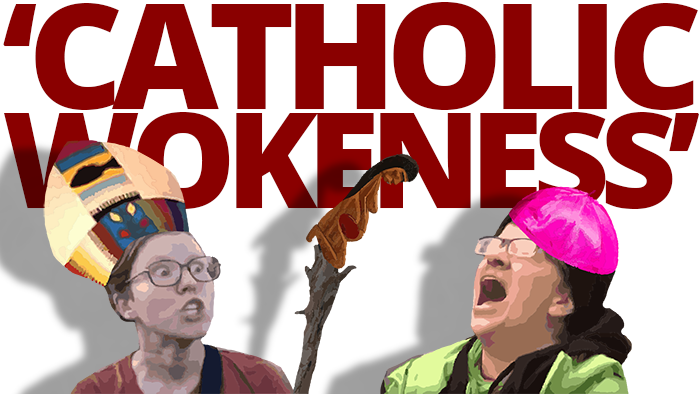