We need it NOW.

May 9, 2019  0
Podcast Available for Premium Subscribers

So here’s a question almost no Catholic ever seem to think of — at least the few remaining Catholics who still go to Mass and have a connection to the Church — how come we all know so little about the finances of our diocese?

That's a legitimate question. In fact, it's a question which demands an answer.

There once was a time when the sheep trusted the shepherds not only with their souls, but also the material goods of the Church — namely, the donations given to them for the earthly maintenance of the Church.

Sorry, but those days are gone, long gone. The bishops can no longer be trusted at all. Sorry to say that, but it's true. Collectively, they have orchestrated the largest meltdown of the Faith in history, and that is saying a lot.

When you look over 2,000 years and realize that in the space of just 50 years, they have managed to accomplish what centuries of persecution could not — it's staggering.

There are so few believing Catholics walking around today that it leaves you speechless. One in roughly eight Americans, for example, is a former Catholic. They have lost the Faith because they were never taught it by the same men that ignorant Catholics continue to hand their money over to believing it will be managed justly.

So for the ignorant asleep sheep out there, here's the question: If these men you stupidly and naively hand over your money to abandon your souls and the souls of your children, why on earth do you think they would deal honestly with your money?

They have mistreated the immaterial; why would they be upright about the material aspects of the Faith?

For example, and Catholics need to start demanding this, full disclosure, full financial transparency from their bishops. It's not their money, and its high time they were held to account for what they do with it.

For example, Cdl. Dolan in New York has three times appealed court decisions saying he needs to turn over the body of Abp. Sheen to his family.

How much have those legal proceedings cost Catholics in New York, because they are the ones paying for it?

But that example isn't even the tip of the iceberg — loads, truckloads, boatloads, of questions need to be asked and answered by every bishop in America. Every dime that goes out as an expense needs to be fully disclosed. Most dioceses in the country don't even post their financials on their website.

Why not? Don't they think you have a right to know how your donations are spent?

But the crybaby apologists and head-in-the-sand Catholics will say the bishop has authority over the material goods of the diocese — true enough, but not good enough.

We want to know, for example, straight up:

Is your bishop or diocese telling you about that cost?

When the cardinals fly all over the world, are they flying first class or business class — which is many thousands of dollars — or are they in the back of the plane getting the smell of the sheep on them?

How about the salaries of the chancery staff? Why isn't the pay of every single top official listed?

How much does the communications director for Detroit, Ned McGrath, make, for example? He has lied and deceived the media in his role for more than 20 years — how much does he get paid for that?

How much money goes into the pension plans of chancery officials who have been effective in destroying the Church with their insane liturgy offices, their social justice departments, their school offices, their adult education offices?

Where exactly does all that money go from the sale of Church property?

How much cash on hand, liquid assets, does the diocese have, meaning how much is in the bank?

Given the dreadful lies and distortions and deceptions the faithful have been treated to for the past half-century, we absolutely have the right to know this information.

In fact, what would be a good idea is for Catholics in every diocese to get together, form a coalition and begin demanding to know this information. Picket the chancery, print up fliers and put them on cars in church parking lots. Wake up the sleeping pewsitters.

Call the local media and get reporters to ask questions like: Why do bishops and their staff think they have no responsibility to be transparent with those who give them their funding? The financial malfeasance is so rotten that most people have no idea because they have just become used to it.

Another, for example, the cost to educate a young man in seminary, on his way to priestly ordination, when all is said and done, is about $250,000. Some cost considerably more if they are sent to Rome or further postgraduate studies.

And yet many of these men are massively unfaithful to the Gospel. They stay in the Church sponging off the donations of the laity. Others leave with hundreds of thousands of dollars of education in their pockets.

And yet the laity is given no accounting, either in terms of personnel or finances.

How many priests leave active ministry in the diocese each year and what is the associated cost of that individual priest? Such an analysis would bear out that the vocations director or the rector of the seminary or the vocations recruiter have not looked at the financial costs involved.

In fact, that aspect has not even hit their radar. And why? Because it's not their money so they don't care. It's your money, so they spend it willy-nilly with no regard for the people who gave it.

Loads of unfaithful men who have no regard for the Faith, Church or souls — loads and loads — have been ordained, which has not only cost irreparable damage on the supernatural plane, but also a fortune in terms of dollars.

Now we presume that when the various bishops who watch Vortex episodes — and we know there are a lot — watch this one, they will be spitting bullets, to which we say: tough.

You have abandoned your duties, way too many of you. You have betrayed your office of shepherd, teacher as well as chief steward of the material goods entrusted to you — not yours but entrusted to you.

Do you really think an accounting is not due? You have questions to answer.

Why are you not posting, all of you, your financials for the entire diocese to see and in formats easily understandable to the average Catholic? It's not your money. Too many of you have betrayed the Faith. On that score, you will give an accounting to Almighty God.

But when it comes to our money, you will give an accounting to us, the laity.

How dare you keep launching your fundraising campaigns for millions of dollars each year and feel not the slightest duty or obligation to tell us how the money is spent.

What are you not getting here? We don't trust you.

And the reason we don't is because you are not trustworthy. You have lost the trust of the faithful through your own actions. Want to earn it back, then start here. Lay out your expenses. Lay out what you approve money being spent on.

Tell us how much your senior chancery staff is pulling down. What kind of health care plan does the bishop enjoy? What's the annual premium for it? Does he have a driver? How much is that?

In years past, not a single Catholic would have given the slightest concern over these questions because we were of the opinion that the material needs of the clergy should be taken care of since they give up much of normal life for the care of our souls.

But you have betrayed the care of our souls, so those rules no longer apply.

Not a single one of you has stepped forward and denounced the evil of the institution that allowed a monstrous homopredator like McCarrick to not just get away with things but to actually flourish.

You owe the faithful, and that's what you don't get. You owe us explanations. You owe us transparency.

Publish the financials so we can all see. Until then, no Catholic should give you one penny for anything. 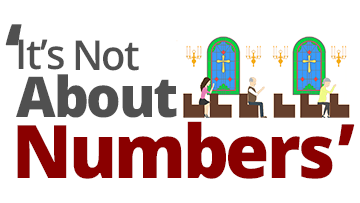 ‘It’s Not About Numbers’
OH. It's absolutely about the numbers.