And get trained up.

No counterrevolution, no counter-insurrection, can be won sitting on your duffs behind a keyboard. It's time to not take to social media and all that. It's time to hit the streets, to physically pound the pavement and the halls of power — just like the Marxists did for the past 50 years.

So here's a great place to start (and with a very important issue, and one Catholics should deeply care about): Border security and its link to election integrity.

Part of the Marxist plan to destroy America is to so weaken the borders that huge numbers of illegals simply flood in. Check. Then, once here, to establish them as operational citizens, giving them all the rights of citizenhood (just missing the actual piece of paper). Check.

One of those rights is, obviously, voting. And as we see in New York City (for example), the Marxists who run that hellhole are now giving 800,000 illegals the right to vote. It doesn't matter where you are: 800,000 voters suddenly added to the rolls is a major force, even in a city the size of New York.

These illegals are beholden to their Marxist overlords. They get on the government dole, which is nothing other than redistributing your wealth to them. They are housed, fed, and transported across the country, again with government dollars (your dollars), tens of millions, reaching into the hundreds of millions, being funneled through Catholic Charities (who pretend destroying America is some kind of biblical imperative, that illegal immigrants have the same rights in a country that actual citizens have).

There's a reason nations have borders — to protect them.

In so doing, they completely pervert Church teaching. But, then again, the staffs of the bishops have been doing this for decades now on every major social issue you can think of.

Arizona state representative Mark Finchem gained national attention in the wake of the election 2020 theft as he fought ferociously for election integrity.

Now he and various allies are taking their message on the road, all across the country, beginning in the most likely of places — McAllen, Texas, home to one of the leakiest border areas in the whole United States, an area often controlled by Mexican drug cartels also dealing in human sex-trafficking (mostly of children).

To begin to combat all this (because Biden and his Bolsheviks don't even care about this, in fact, they actually engineered it all), a huge event is planned in McAllen for the last weekend in January (Jan. 29–30), where they are planning for thousands.

It's called the Take Action Tour, and it's being sponsored by the group "Women Fighting for America" because, as polls show, domestic security is a high priority for women voters. Christie Hutcherson, foundress of Women Fighting for America, said, "Today, America's closely held beliefs and freedoms are under constant attack. We will not stand idly by and let America become another failed socialist experiment."

So it's not about keyboard warriors or social media likes. It's about actually getting out of the house, off the couch and committing. The McAllen event is not just a rally. It's a boot camp with a full day of how-to training, to push back against and defeat the Marxists. Among the speakers will be Gen. Michael Flynn — one of the first victims of the socialist assault of the deep state in Trump's early days in office.

As a quick aside — ever notice how the Marxists are always going on about voter integrity and voter rights and full, free, fair elections but, the instant Trump won, they set about for four years to do nothing else but undermine the results of 2016 (culminating, of course, in the giant steal)?

Trump won, yes, but they did everything they could possibly do to limit and curtail his victory because Trump was pretty clear about one thing: "America will never be a socialist country."

Speaking of Trump, as a little incentive to pack the arena in McAllen, there's talk on the ground there that a sold-out arena — well, we'll leave it to Finchem to spell it out.

All that aside, we need to understand the psychologies here, on the right and the left. Conservatives aren't good about all this. They are more concerned about the normal things of life: God, families, work — all that. So they view getting politically organized as "leaving their comfort zone," which it is. So, like most people, they don't like doing that and, as a result, remain too uninvolved, thinking voting every now and then is enough.

However, over on the left, it's just the opposite. They see things like God, family and jobs as abhorrent to their very existence and seek to tear it all down. They are steeped in death and destruction and carry that rage into the political arena. They channel their energies into destruction, while those on the right sit on their couches, cook meals and clean up after dinner.

It's about actually getting out of the house, off the couch.

This paradigm must change.

If conservatives (and this includes orthodox Catholics) refuse to get involved, the Marxists will soon be in your living rooms, and you'll be cooking for them.

Border security is a huge issue because of the knock-on effect, the massive destabilization it brings to the country, the economy, everything. There's a reason nations have borders — to protect them.

Now, since the Marxists have so much control of America, it's time for everyone who cares to realize that the rules have all changed. Which means what we do must change. It's pretty clear, actually — change, or lose your country. It's that simple.

If you are able to attend the McAllen event at the end of the month, we've attached the link down below with all the details and ticket info.

As an additional note: A private border tour, right into the heart of the crisis, will happen on Sunday (and yes, there will be massive security). And just think about it: If you go to the border and inspect for yourselves, that will be one more time than unelected Kamala Harris has.

We highly encourage you to attend, if at all possible. This is exactly what the Marxists have been doing for years, and they've perfected it.

And for the Catholics listening to this — you can strike a double blow, not only against the political Left, but the so-called religious Left, which has seized operational control of the Church.

Prayer and action, faith and good works, are necessary. 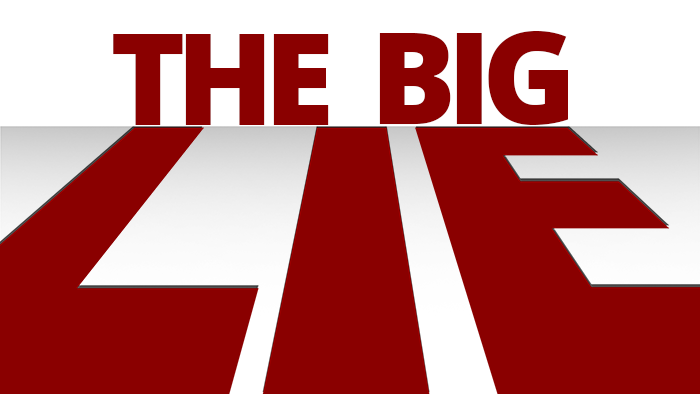 The Big Lie
It's time for the 'big truth.'