Which really means: Get the Church!

May 24, 2017  0
Podcast Available for Premium Subscribers

All this talk about Russia and collusion with Trump and his campaign, can we give it a rest? No, comes the answer screaming back from the Democratic, leftist media industry. Trump must be taken down. Period. There is no other option. And, now, word is being spread all over the nation's capital that the Russians are starting to get a little peeved over all this as well.

There is a connection, but nothing that the Democratic media industry wants you to think about. Russia was the enemy of the United States for generations because it was Communist. It was atheistic and as such was the enemy of the Catholic Church, and the Church made no bones about opposing Communism. It's why the Church was persecuted without mercy behind the Iron Curtain for decades. And it's also why the leftist elite in the United States during those days was always celebrating the Commies.

Stalin was affectionately referred to as "Uncle Joe," an uncle who murdered millions of his own. Che Guevara was celebrated as a revolutionary. He was a bloodthirsty killer. Castro was all the rage among leftist Americans because he was another atheist Commie.

But now that Russia, the mother of all Communist regimes, is no longer officially Communist and is in process of rebuilding the churches and faith that was destroyed under Stalin and company, suddenly, the American Left now sees Russia as some kind of horrible threat, or at least they are casting them as that. Many of Russia's people are undergoing a kind of re-Christianization, and, well, we can't have that. So the Left that used to lionize Communist Russia, is now up in arms that not-Communist Russia colluded with Trump to get him elected or so the hysteria goes.

But why the intense hatred of Trump? Why is the Democrat media industry after him so badly, frothing at the mouth? Everything is chaos, badly. Impeach, destroy, tear down, etc. Well, Trump, rightly or wrongly is seen by them as a return to a more religious climate, meaning moral. Whether Trump himself the man is moral or not, religious or not, doesn't matter. He is supported by vast numbers of Americans who want a return of that worldview, and that is enough to have to completely destroy him and make sure Catholic morality never rises again.

Now, inside the Church, there are elements of the Democrat media industry. They are fake Catholics who agree with the worldview that socialism, which the Church has repeatedly condemned, is the salvation of mankind. They are the ones constantly going on nonstop about illegal immigration and poverty and man-made climate change. They are the ones who oppose the Church's moral teaching, especially in the area of sexuality. And from the 1960s on, they have largely seized control of the levers of power. Not completely, but enough to have eroded the faith of tens of millions and brought about a nearly unprecedented crisis in the Church. But their work has been so subtle and well-executed, so perfectly planned out, that much of it has gone by undetected in any major way.

It's been one gigantic broad front war — a slow enough movement to never seem overtly threatening, yet broad enough to encompass every solitary area of Church life. In yesterday's Vortex, we spoke about the watershed moment, their victory lap so to speak, when Obama appeared at Notre Dame as their champion. That was more than eight years ago. Since that time, their reach has extended, and the rate of the destruction of the Faith has stepped up dramatically.

Having seized power, they are more blatant about its use than they used to be. Now they are bold, declaring that sacrilegious Holy Communions are okay, preaching that everyone goes to Heaven or nearly everyone. That we should not recognize or preach about the uniqueness of Catholicism with all that sexual morality stuff because people's feelings will be hurt. The Vortex focuses in on all this — this perverted, distorted presentation of the Faith, which isn't really the Faith at all.

It's why so many in the Church establishment hate this program. It exposes the lies and deception of many in the Church who have worked to undermine the supernatural character of the Church for decades. They have attempted to usher in a whole new Church — not dedicated to the mission of saving souls but to the glorification of man. This needs to be understood in all its perversity and danger, and it's why we have written our latest book from St. Michael's Media Publishing — The Vortex, Volume 1.

You can order your copy by just clicking on the link.

In it, through the use of transcripts from throughout the years of the Vortex, we tackle various subject areas where these operatives have done their most damage. It's something the large portion of Catholics, even those few still going to Mass, which is about one in five, know next to nothing about. Even that statistic alone should make people sit up and pay attention — only one in five still go to Mass — and in the larger dioceses of the country, the percentage is even lower.

Over the years, many supporters have said they'd like a hard copy of the most salient information from more than 2,000 Vortex scripts. So we've boiled some of those points down and distilled them into some of the most important. The book is a simple read on purpose to make it easy to digest all this. It's in very short chapters, and each one is a stand-alone, so it can be more easily approached.

Catholics, who realize something isn't right, need to begin to get involved, and the first step to becoming involved is becoming educated. The Vortex, Volume 1 is a significant step in becoming educated. So please click on the link, order your copy or copies. The shipment from the printer will be here in a day or so, and we'll start shipping them out almost immediately.

If you're having discussions with friends or family members who aren't sure how to think about all this, give them a copy or do some reading of your own and present the ideas in conversations with them. We need to get this dialog going as our liberal friends would say.

And remember, the whole "Get Trump" movement is really a "Get the Church" movement because the Democrat media Industry wants to keep gay "marriage" and abortion and contraception and euthanasia and transgenderism protected and glorified, and they are afraid of those who point out those things as evil.

Get your copy of The Vortex today and learn how these same anti-Catholics gained such prominence in the Church and how to combat them. Thank you in advance for your purchase, prayers and support. 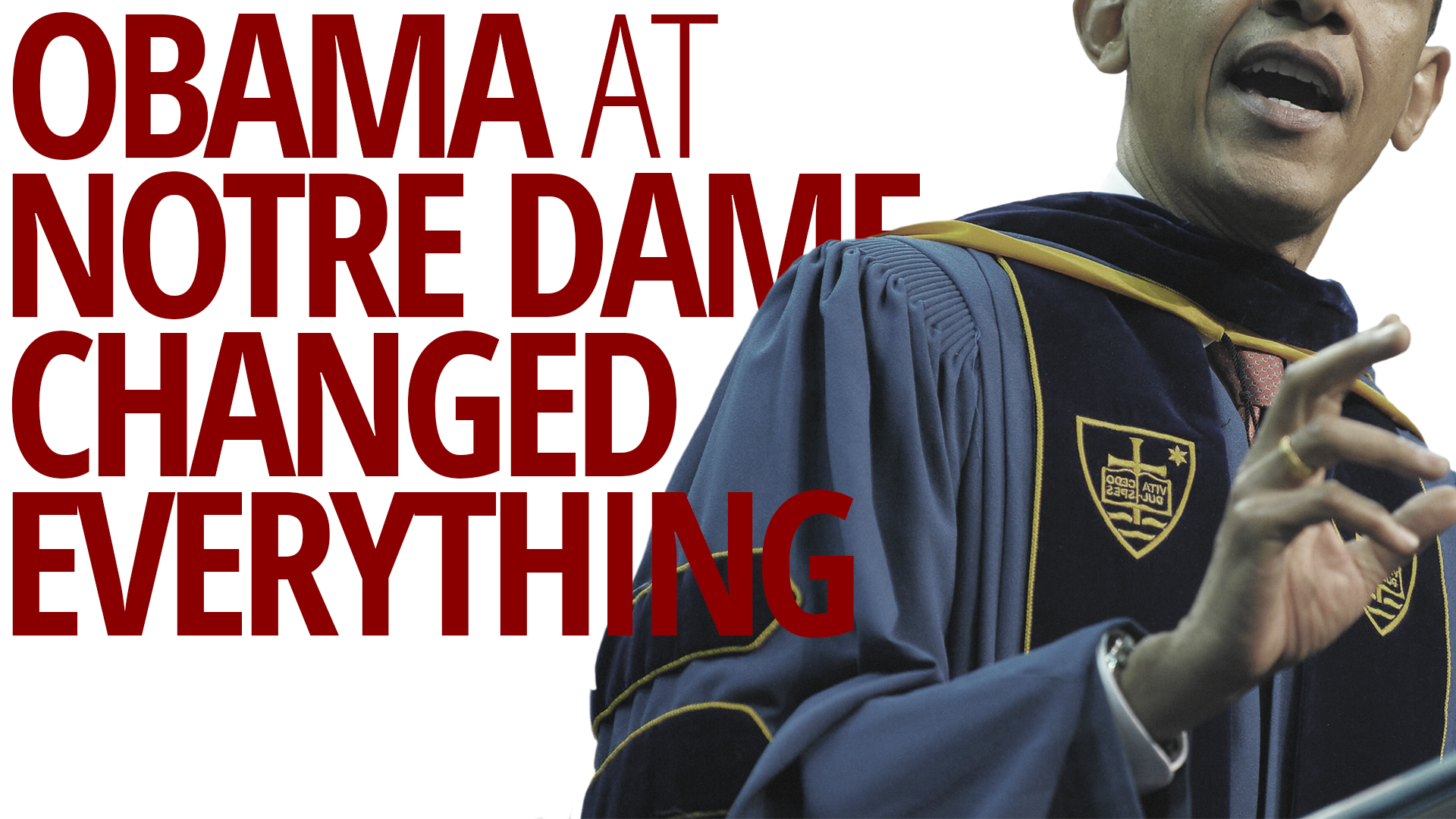 Obama at ND Changed Everything
What a wake-up call!