Church Militant is the solution.

This Vortex episode is deliberately not being released on YouTube because it's about getting away from the Marxist-minded giant tech outfits who have complete control over what truth to squash and which lies to promote.

Here's a little background on all this from our perspective here at Church Militant. Long ago, even before 2016, we were internally discussing that the day would arrive when this would all start to happen. We aren't prophets or weren't having visions or anything of the sort.

If you follow us, you know we have pretty keen insights into the state of affairs in the Church and the world because we keep our finger on the pulse and speak with lots of people behind the scenes, frequently. Plus, we have some pretty insightful people here on staff as well who "get it."

America was deteriorating long before the 2020 election was stolen, and affairs in the Church — the corruption of the hierarchy — was speeding that process along. So where we have arrived was going to be inevitable. And here we are. So before we get censored and dialed back and deplatformed, we are going to begin reducing our own footprint in the world of giant tech.

But — and here is the good news — in our expansion campaign last year that thousands and thousands of you contributed to (thank you again), preparation for all of this was baked into our plan. It wasn't just brick and mortar and increasing the space (which was sorely needed), but it also included a hefty chunk of change to plan for what we now see happening.

This steamrolling of conservatives on the internet is not going to stop. It's going to increase.

We weren't keen on making that part widely known, in case it triggered a response from giant tech before we were ready and the time was right. Well, we are ready and the time is right. Big Tech has already censored the president. Then they started limiting and deplatforming other conservative groups.

Then, as you know, the hosts for Parler just dropped them because of the mass migration of faithful Catholics and political conservatives to the site. This steamrolling of conservatives on the internet is not going to stop. It's going to increase. The underlying problem is pretty simple.

A handful of Marxist zillionaires developed all the technology, profited from government protection from being sued, constructed a monopoly, created all their own systems, collaborated on how to get all this hooked and connected and positioned themselves to exert near-total control over the masses after getting the masses to sign up.

Now, almost everyone Googles, Facebooks, tweets and so forth; in short, they have most of the country right where they want them. In even more direct summary, it's their sandbox, and they control it utterly. People who want the truth simply cannot play in that sandbox. It's built to lie, distort the truth and push a Marxist narrative.

As Fr. John Hardon used to say, and we have often repeated, "It's the Luciferian media." And that is not restricted to just the likes of CNN and The New York Times. It's the entire array of the massive media apparatus. The only thing they cannot ultimately control with ease is individual websites where all the content is controlled and published by the website owner.

That's what we are here at Church Militant. We have the most robust site in the entire Catholic world, bar none. Our partner companies, who we've worked with for years, are absolute cracks at their jobs and are faithful Catholics.

While many other Catholic outfits were, perhaps naively, relying on YouTube and so forth, we've been quietly establishing professional relationships with the best folks (professionally and in terms of Catholicism) in the business who are not going to stop doing business with us because we are orthodox Catholics speaking the truth.

In short, if any solid, Catholic, politically conservative group does not have a superb, robust, knock-'em-dead website with massive capability for video, streaming, publishing, emails, push notifications, payment processing and so forth, they aren't going to survive. Giant tech will see to that.

Church Militant not only has all that, but it has it in spades. That's what we've built here with your help, our insight and God's grace. So here's what we are asking you to do. Subscribe to Church Militant now. Sign up for our email list to get access to authentic Catholic content that isn't going to be taken down and suddenly disappear because some Marxist jerk doesn't like it.

This crowd just deplatformed the president of the United States. Do you seriously think for one minute that after Beijing Joe is sworn in, they aren't going to go on a rampage across social media? They took down an entire social media application in Parler. Loads of familiar voices are now off YouTube.

We are telling you, as my mom used to say, "as plain as eggs are eggs," you need to get out of that sandbox before you are thrown out, and get over to Church Militant's actual website. Stop watching us on third-party sites run by Marxists who hate the Church, the truth and America.

Is it more convenient to just sit back and let YouTube's playlist run for you? Well, of course it is: That's how they built it. But no one is asking that you push a boulder up a mountain. Just make a couple more clicks on the site and be more proactive and less passive in dealing with information.

Another major point to consider is our expertise in delivering video content in addition to articles. In the information world, video is king. We've said that since our very first day back in 2006. It has to be video because that's how the vast majority of people consume their information.

The country has changed. And we stand ready here at Church Militant to help you survive that change.

That's why YouTube, a video platform, reached the crushing heights it has. Video is what Church Militant is all about and has always been about. And frankly, no one in the Catholic world does it like we do, not even close. That's not to slam anyone else, it's just to say that this is our expertise because of not only my professional background for decades in commercial broadcast and news (winning multiple Emmys) but also the intense coaching up the staff here receives each day, turning them into television people as well.

Church Militant should be your first stop every day and at various times throughout the day. Bookmark it as a favorite, and make it your home page. Sign up for the emails and get the information straight from us, directly (not by dancing around in the Marxist sandbox).

Life has changed. The world has changed. The country has changed. And we stand ready here at Church Militant to help you survive that change and, in fact, prosper in it. From news coverage to the most faithful, authentic Catholic programming, by the thousands of hours for premium members, no one has what we have.

And here's a closing thought: Wouldn't you want to support an outfit and join an apostolate like this that had this kind of foresight to plan ahead (as we have), so that when the inevitable storm came, you'd have a place to go for truth and safety?

Make Church Militant part of your life now. Come to us frequently, and read our emails with important information. Life has changed. And so must we all. 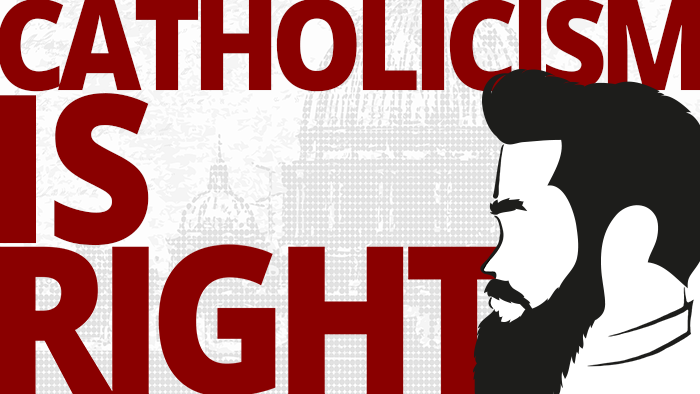 Catholicism Is Right
And the only recourse against the Devil.