Getting Rich From the Peasants

I'm Michael Voris, and we are at the Bringing America Back to Life Symposium here in Cleveland, Ohio.

Church Militant was among the many speakers invited to this annual event dedicated to ensuring the dignity of human life — a dignity that must be respected in all its forms — because that dignity ultimately derives from Almighty God.

However, what Catholics have experienced for the past half-century or longer is a growing disrespect at the hands of too many leaders in the Church. The accumulated lies, cover-ups, financial corruption and immorality of so many of them eventually takes its toll on the faithful, causing a discouragement to set in.

It is little else than abuse — abuse of a God-given authority granted for the singular purpose of shepherding souls to Heaven.

Unlike the authority of the state — government, police, military, courts — in which society decides to hand over some legitimate tasks to the state for the common good, authority in the Church is top down. So abuse of spiritual authority is far worse, far more damaging because the effects of this sort of abuse could have everlasting consequences.

As all sorts of truths are now being exposed at a dizzying pace, truths about the Communist infiltration into the Church, the homopredator priests who have destroyed so many young men, there is also an element that tends to get overlooked, or at least doesn't get as much attention paid to it — the financial corruption — and that's largely because it's mostly out of sight.

There are many immoral leaders in the Church, and generally speaking, immorality does not remain contained or isolated to just one area of a person life. The underlying reason for that is simple. We humans are hard-wired for truth because we were created by God, for God.

But once a person embraces a lie, which is a good working definition of an immoral man, then he has turned away from the truth. Once a man sets his feet on that path, commits to lies, he becomes an offspring of the serpent — who is the father of lies.

And Satan works his wiles to completely corrupt a soul, for the more corrupt a soul is, the smaller the chance that soul will turn back to God before death. So Satan is never content, so to speak, with a soul being immoral in just one area. He works at total corruption.

And it is often the case that among Church leaders who have become corrupt in, say, doctrine, they will also be corrupt in matters of sexuality or finances or both. In the realm of finances, owing to the extreme lack of transparency, there is often a sense of entitlement by morally corrupt leaders.

They exhibit not the slightest concern that the money they are pilfering and the accounts they are raiding are from the peasant Catholics. It's akin to the king raiding the struggling farms of peasants and imposing a burdensome tax of the livestock and the crops. And this is the case throughout the Church wherever large holdings are found.

Take, for example, the archdiocese of Chicago under the current temporary control of Cdl. Blase Cupich. Cupich is on a tear throughout his archdiocese, closing down churches and selling off the property at breakneck speed.

According to latest numbers available, the archdiocese's current assets surpass $3 billion in cash, investments and real estate. In trying to produce the best lucrative outcome as possible, Cupich has brought in some pretty costly personnel, as well as consultors. But he keeps the amount of money these people get as under wraps as possible.

Since the days of John Dearden in Detroit and Joseph Bernardin in Chicago, the various archdioceses across the nation have become bloated corporations with expensive lawyers, high-paid senior leadership and the regular clients of massive, multinational consulting firms who take their 10–15 percent off the top.

For example, in Chicago, as soon as Cupich arrived four years ago, the consulting firm McKinsey was brought in to assess the financial assets and figure out how to get more cash from the faithful. Cupich, in consultation, developed his cheating plan called "Renew My Church" — which might as well be called "Restock My Wallet."

The plan involves shutting down various parishes whose land can be converted to a quick buck. "Renew My Church" is touted all over the archdiocese, putting a spiritual face on what essentially amounts to ripping off the faithful.

One of the people vested with running the show in Chicago is a woman from the financial world by the name of Betsy Bohlen. Betsy is the chief operating officer for the archdiocese, and in her role as COO, Betsy pulls down a whopping $300,000-plus a year — a figure not really talked about in the glossy "Renew My Church" brochures which put the poor mouth on the state of affairs in Cupich's multi-billion-dollar world.

Additionally, Betsy also used to work for — not a big surprise — McKinsey. And yes, if you are thinking this all looks a little cozy, you're right. McKinsey makes a small fortune from the archdiocese as the major consultor, and Betsy, former McKinsey worker, pulls down some pretty decent coin.

When you stop and consider that a good priest in Chicago makes about $30,000 a year, then it becomes enraging that Bohlen makes $300,000 a year.

And where, eventually, is all this money originating? From the peasants and their collection offering. Each week in Chicago, according to their own records, millions are dropped into that collection basket, of which the archdiocese cuts a hefty cut.

The various parishes that McKinsey and Cupich and Bohlen are constantly "assessing" and targeting for liquidation were built on the backs of mostly immigrant Catholics, who, for love of the Church, sacrificed for them.

This is spiritual abuse, a betrayal of the Faith for the sake of money. When Cupich quietly releases the financials each year, the specifics are very difficult to find — if they are there at all.

There is no name-by-name list with associated salaries for the highest paid staff in his chancery. There is no point-by-point dollar figure for the archdiocese's attorneys.

Just how much is being paid of the peasants' money to lawyers who are busy concealing crimes and sex abuse payouts and the like? What about it, Cardinal Transparency? No wonder he doesn't want to go down any rabbit holes.

How much is being paid for abusive priests, or supporting doctrinally insane clergy — their travel, their hotels, their meals? All of this, every bit of it, is being funded by the peasants and allocated by immoral men and women whose immorality stems from their abuse of trust.

No diocese in the country is really forthcoming about their business dealings and salaries. They do the bare minimum when it comes to reporting and keep as much as possible under wraps, even the fact that the higher-ups are getting rich at the expense of the peasant Catholics.

A few billion dollars in assets will certainly buffer various archdioceses from financial collapse in the next few years, but it will not buffer them from the spiritual collapse which is already well underway.

The Communist infiltration into the hierarchy has taken a number of decades to have its full effect realized, but it is being realized.

The assets of the Church, intended by the peasants to foster the spread of the Faith, have been quietly seized by corrupt leaders to bring about a globalist rule where the Church is co-opted in support of that mission.

Why aren't Catholics demanding from their leaders a full accounting of the money? What are the attorneys getting paid? What are the salaries of the highest paid? This evil needs to be confronted dead in the eyes. It's all the work of the devil and it must be defeated. How dare these morally vacuous leaders and staff suck the life out of the Church and dress it up as some spiritual good.

It's going to be a very interesting Last Day. 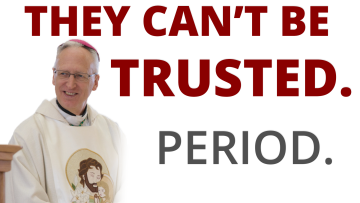 They Can’t Be Trusted. Period.
And some bishops may have to go to jail to have trust restored.