It will never work.

If you hang around the Church these days, in particular, the Establishment Church of Nice, you'd have to be dead to not hear the buzzword missionary discipleship. Add to the front end of that the term "joyful band" and you end up with the catchy little phrase a joyful band of missionary disciples. That's the vocabulary circulating throughout the Church these days. It's caught on like wildfire — like a campaign slogan during election season — "Make America Great Again," "Hope and Change," "We need to be a Joyful Band of Missionary Disciples."

It's actually kind of pathetic, this jingoism Catholicism — this gimmick Catholicism with its laser light shows. This term has taken hold in the Church, and every discussion that is being had involves this term. It's practically replacing the now hackneyed "new Evangelization." The term itself catapulted to importance when Pope Francis used it in his 2013 Apostolic exhortation Evangelii Gaudium (Joy of the Gospel) where the Holy Father first uses the term. The upshot of what it means is summed up in paragraph 119:

Every Christian is a missionary to the extent that he or she has encountered the love of God in Christ Jesus; we no longer say that we are "disciples" and "missionaries" but rather that we are always "missionary disciples."

Now, that may have been where it gained worldwide attention, but it first appeared on the scene back in 2007 in a document, which came out of a continent-wide meeting of the Latin American bishops' conference in Aparecida, Brazil. The meeting in Aparecida was held by senior clergy in part to devise a strategy for the massive falling away from the Catholic faith that had seized formerly Catholic South America. For most of the 20th century, South America was roughly 90 percent Catholic. But near the end of the century, the numbers started plummeting thus prompting the discussion among all South American bishops in 2007.

Well, that was ten years ago now. Then-Cdl. Bergoglio, Pope Francis, had a major role in writing the document. And since he has become pope, various bishops and conferences are running around all over the place, babbling on about the need to be a joyful band of missionary disciples. It has become the blueprint in principle for what they are all saying will be the resurrection of the Church — a much-needed revitalization. So, it only seems fair to check and see how well the "missionary disciple" approach has worked in the very land it was born — South America.

It was dreamed up by looking at how Protestants were making such inroads into the South American Church and stealing away millions of Catholics. The upshot was — put simply — the Church needs to appeal to people's emotions more and make people feel all excited, in short, be more evangelical and Pentecostal Protestant-looking. The plan has bombed since its implementation 10 years ago. Numbers of Catholics in various South American countries have cratered, with the continent overall going from roughly 90 percent in 1990 to 66 percent today. That's over a hundred million souls leaving the Church and flooding into Protestant congregations over the past 25 years. And during the last 10 years, when the Aparecida document with its missionary discipleship plan was in full gear, things got worse.

The rate of decline of the Church in South America has actually increased. A sweeping Pew Research Survey from two years ago finds that 69 percent of Latin American adults say they are Catholic, even though 84 percent of those surveyed said they were raised Catholic. Translation: there has been a 15-percentage-point drop-off in one generation and during much of that generational collapse was when the Aparecida plan of missionary discipleship had been instituted.

Why is this happening? On the macro level, it's actually not very complicated. Catholic spirituality was being ignored by Church leaders in South America from about the 1970s on. Sure, huge majorities still identified as Catholic at the time, but that was then. Today, it's all flipping. A huge surge of American Protestant Pentecostals and fundamentalists moved in — aided by U.S. foreign policy — and provided an emotional spirituality, which appeared better than no spirituality, and that's all she wrote.

So in 2007, Latin American bishops having largely abandoned Catholic identity — were looking around at what had essentially become the only game in town — Protestant emotionalism. Their brilliant plan was not to look in the mirror, admit their own negligence in keeping Catholic identity and spirituality vibrant. It was to look at how an anti-Catholic identity plan was working and imitate it. And the reason the number of Catholics keeps falling is because simply put they get a better show across the street.

This is what's so disturbing about how American bishops are throwing in with all this. The plan didn't work in the land in which it was born, which remember was a hugely majority Catholic region of the world. The Church had everything going for it — numbers, money, culture — and then they roll out their "let's look like the Pentecostals so we can convince people to be Catholic" plan. It's simply nuts, a non-starter. And when the "let's be Catholic by looking and acting Protestant" plan is installed in the U.S., it will fail.

Missionary disciple is a term that doesn't say anything explicitly Catholic, and that might be because depending on how it's implemented from one diocese to the next, there’s nothing particularly Catholic about it. This looks more and more like a case of "if you can't beat 'em, join 'em." Where are the Catholic leaders who have any interest in an authentically Catholic revival? You young men in seminary right now, the few of you there are, and you young priests take note of all this. This craziness currently in control of the Church will have left a Church virtually demolished over the next decade. You and a handful of faithful committed laity will be responsible for the preservation of the Faith. Do not give in to the temptation to resort to gimmick Catholicism. 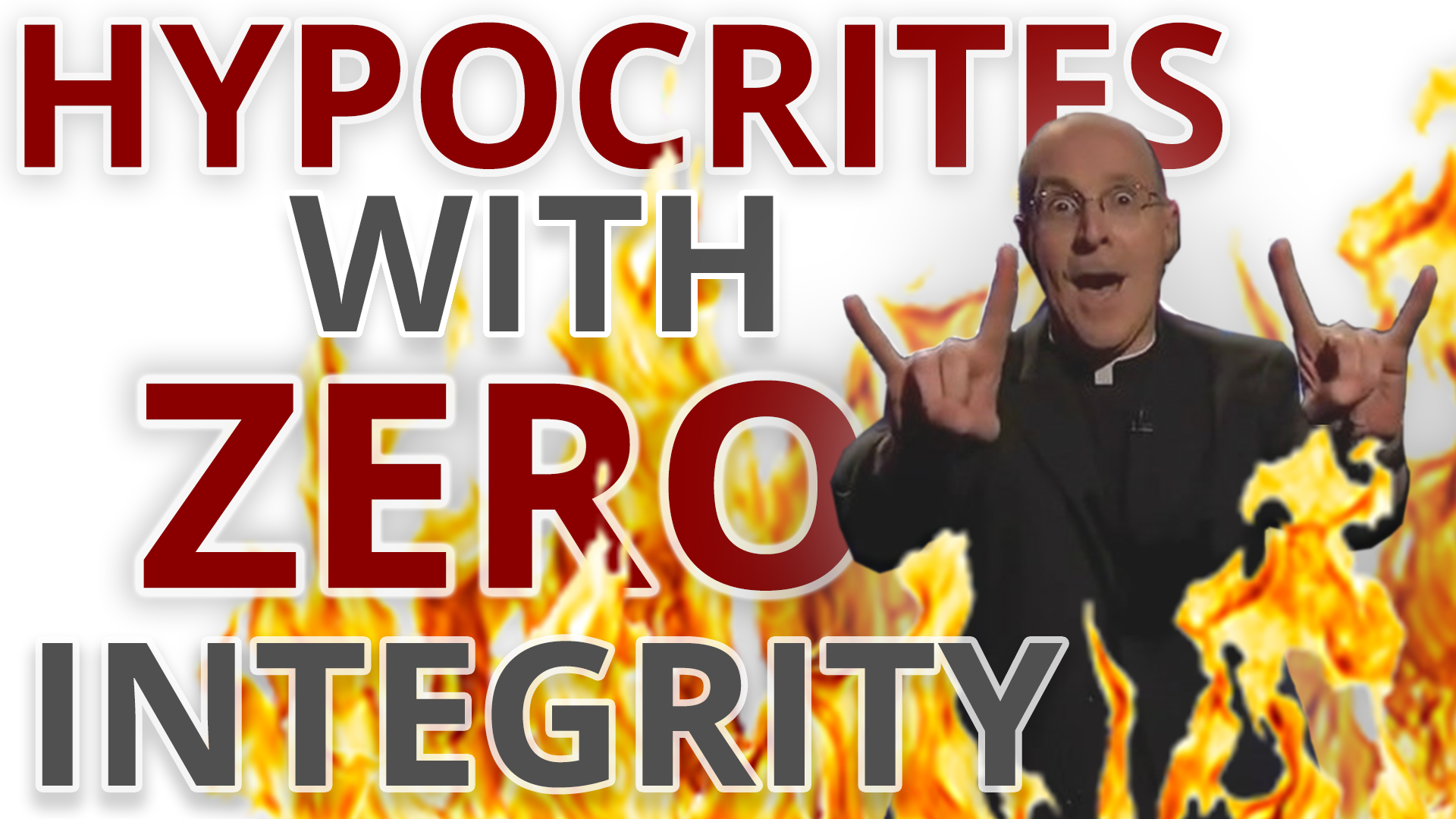 Hypocrites With Zero Integrity
Without repentance, Hell is their fate.