In the service of death.

The U.S. presidential election is less than 190 days away, and both sides are in all-out assault mode. And by "sides" we mean Team Trump vs. the deep state, the Marxist media and Beijing Biden.

The distortions and deliberate avoidance of the truth are so ridiculously over the top — that is, compared to the SSPX denials and then backpedals regarding the international cover-up of sexual abuse within their ranks and moving around of predator clergy.

The Marxist media are so busy crafting a totally phony narrative that they're tripping all over themselves. In fact, so completely phony are their stories that President Trump just said he's had it with the phony journalism and moved the daily briefings to a day-by-day call.

Why? Well, perhaps the most outrageous claim ever made by the White House press pool was that the president told Americans to inject themselves with or drink disinfectant. While his actual words did suggest that for a moment, because he conflated two different thoughts as he was freewheeling in his speech — something those same reporters do every day — when a reporter asked for clarification, Trump said in essence, no, don't drink bleach. But that didn't stop the hate-Trump media from piling on, and the Left from flat out lying about it.

The goal of all of it, at the end of the day, is to keep the child-killing apparatus perfectly intact.

Remember, lying — by deliberately leaving out the context which was as plain as the nose on your face — is nothing new to this crowd because they support killing children. If you are on their side, nothing you do makes you unworthy to hold office. Virginia Gov. Northam's yearbook revealed that blackface and KKK photo from back in the day and he's still governor. He knew the media would have his back and of course, they did.

Likewise, nothing but a string of lies, not a single accusation anywhere close to being substantiated by Christine Blasey Ford against Brett Kavanaugh, and the Marxists were all over Kavanaugh because they had a pretty good idea he was a sure bet against Roe. But Joe Beijing Biden actually has a solid case against him, with corroborating witnesses — who are Biden supporters to boot — and the Marxist media totally ignores the story. Tara Reade has laid out time, date, location, people she told at the time who have verified her comments from back in the day.

Compare to Ford's fictitious account — who couldn't say where, when, what time, how she got there, wherever 'there' was, how she got back — nothing. Not a single fact except she had one beer. That she had absolute crystal clear recognition of. And of course, the Marxists in the media and the Senate had to be hospitalized for lack of oxygen for screaming non-stop "believe women!" But with Tara Reade's more than credible accusations against Beijing Boy Biden, they refuse — an act of the will — to even discuss them, much less believe them. So the lesson is "believe women" who support your narrative. Others — actual victims — they can go to hell.

Polls everywhere by Marxist outfits say Beijing is hammering and will hammer Trump in the election, just like those 2016 polls said the same thing about Hillary. But there's no doubt that the Wuhan virus has given the Marxists another weapon to bludgeon pro-life Trump with.

Notice the glowing, non-stop coverage of Emperor Andrew Cuomo, who announces from on high all the latest news except that he and other Marxist-styled, Party of Death governors — including here in Michigan — were woefully unprepared for any kind of medical crisis. This just happened to be the one that showed it. And because of the threat posed to the health care system in these states — again a function of their unpreparedness and lack of foresight — the entire economy has to be shut down, which of course they will use later in the year to hit Trump with and blame him. The Left is already saying that it's Trump who has the blood of 50,000-plus Americans on his hands.

This is more than pathetic, more than over-the-top. It's demonic because first it's based on lies and second because the goal of all of it, at the end of the day, is to keep the child-killing apparatus perfectly intact.

In their view, Trump cannot win because Ruth Bader Ginsburg will never survive four more years, and if he gets to replace her with a pro-life originalist, it'll be lights out for abortion being the law of the land. It will become just the law in some states but no longer the land. Given the relative youth of Trump's appointees, none of these child killers in the game currently will live to see an overturning of Roe, itself overturned. Roe v. Wade will go to where it belongs — the ash heap of history and Hell. And then the battle moves to the states.

Nothing else matters to the Luciferian Left, which is why nothing else should matter to you in the upcoming election. Push back against all of this — the near-Marxist shutdown of the economy, the lies protecting Communist China, the assaults against Trump — all of it.

Call out what it's really all about — killing children. It's never been about anything else. 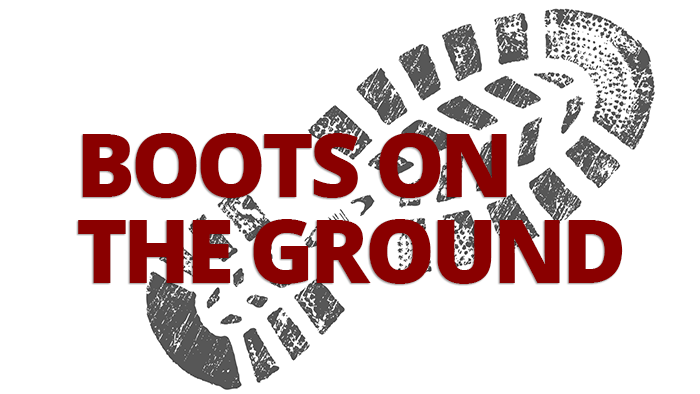 Boots on the Ground
And they are 'angry' boots.