And there are really two wars.

It certainly appears as though we are rocketing with lightning speed toward the end of something — the world, an era, Western civilization. A quick side note: Remember, we are always moving inexorably toward the end of the world. Every day it gets one day closer.

Likewise, every single one of us is moving toward the end of our world, our personal worlds. No one watching this Vortex (or hosting it for that matter) will live another 100 years. Every one of our worlds will have come to an end. The end times and all that is a distraction, typically expounded on and emphasized in Protestant circles for its drama quotient, with great emphasis on theological error.

Your world is going to end. That's what you most need to be concerned about. Likewise, again — the end of Western civilization — an honest assessment would conclude that has already happened. Sure, there are a few more bricks in the wall that have to be dismantled by the Marxists, but they are well on their way to achieving what they set out to do about 100 years ago, what their Freemason fathers set in motion 300 years ago.

On the emotional side, there's no doubt this is enormously painful to watch. We see non-stop treachery from the Supreme Court, for example, certainly from within the ranks of the U.S. bishops and the Vatican. For those of us who have been around for a few decades and grew up under the American hegemony, we are seeing the meltdown of everything we grew up with and just assumed would kind of always be there.

In the Church, it's the same thing. Persecution was something that took place "back then" or "over there." We were always free to show up to Mass in our finest beachwear and listen to Fr. Effeminate tell us "God loves us" and "We shouldn't judge," an encapsulation of the gospel of the Church of Nice. And we got to do it every week.

Sin, damnation, the Cross — all that medieval stuff — that all happened back in previous centuries. "Fellowship" and donuts are as significant as Mass, or so virtually every priest and adulation-loving bishop would assure us (in word or action). What this produced is an army unable to fight, because it has no weapons and is oblivious to the reality of the war raging about it and heading straight for it.

But the fight is what this life is all about.

But the fight is what this life is all about. They don't call it the Church Militant for nothing. Many Catholics today — good people, faithful people — look around and are depressed and disturbed and troubled as they see their world vanishing, the Church and the culture.

And truth be told, it is sad. Comfort, stability, continuity, safety — these are things every human desires. But all of these are dissipating in quick order, and faithful Catholics wonder how to reverse it. We see our efforts at holiness or evangelization (or just plain trying to wake up others to evil) as pointless because they go nowhere. Few, if any, are convinced; we end up being roasted at our jobs, in social gatherings or in our families.

It's not only spiritual; it's also personal. We have emotions and feelings. We feel sad and bad for those who will not see, people we love and want to be saved. At some point, however, we have to embrace this truth: The glory of war is an end in itself.

The truth needs announcing, regardless of whether people listen and convert and get right with God before facing their judgments. The truth needs to be proclaimed, and that is the first demand of discipleship.

If something happens after that which is good, well, that really wasn't us who accomplished it. It was Heaven. We would have just been the convenient instrument Heaven used. But Heaven could have, any moment, simply employed another person. We, as individuals, are not critical to God's plan and actions. What is critical is that we do what we are commanded to do. And that is to announce the truth — period.

There is a glory in fighting even when you lose — and "losing" is quite a loaded term. First, a person who "loses" because they are declaring and defending the truth never really loses; they are just behind temporarily. When it's all over, they win. They secured their own personal salvation, which is the single goal of the Catholic life.

Every one of us is involved in two wars, a worldly war and a spiritual war.

The only soul you can save is your own. You have complete and total mastery over your own soul and its salvation. That's ultimately what you're fighting for because it's the only thing you can fight for and be assured of victory. Everything else, in a manner of speaking, is a bonus. You can't make someone else believe. You can't save their soul. All you can do is work and pray and hope.

But with your soul, you have the final say. Integral to salvation — your salvation, my salvation — is to declare the truth, and whatever happens, happens. People convert, or you are fired from your job or Biden wins and you are declared an enemy of the state for your "hate speech."

The effects of saying the truth should not enter into your calculus. You say the truth, fight the war, purely because that is what you can do. Barring some miraculous turnaround (there is precedent) it would appear most of how we have experienced the Church and culture up to this point is coming to an end.

Okay, we can mourn and lament — we're only human after all. But too many let themselves become overwhelmed with a kind of grief that their efforts are not causing a rolling back of the Marxist evil, that every day it gets worse. On a cultural level, that's probably true — or at least appears to be. But quietly, unseen from the Marxist world, you are in the process of securing your own salvation.

Every one of us is involved in two wars, a worldly war and a spiritual war. By fighting both, we achieve final victory, even if we lose the first one. The world is passing away; so whoever wins that war, it was always destined to be a temporary victory at best. But the second war — the war for Heaven, for our salvation — that's where the glory is, fighting that war.

So while it is sad, and even at times somewhat distressing watching the temporal order all vanish, remember the war and the glory given to us to fight it! Announce the truth! 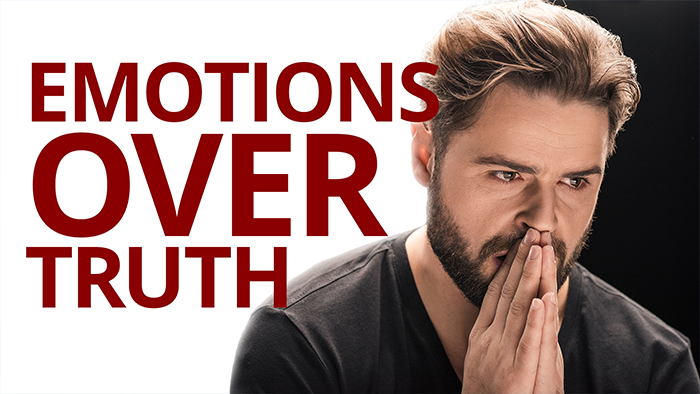 Emotions Over Truth
The recipe for damnation.