Don't mess with the leprechaun.

With college football season about to start and with all the brain-dead, woke individuals walking around in their zombie mode, it was only a matter of time until one among them noticed the "ethnic" reference to the Irish in the mascot and sports team of the "Fighting Irish" at Notre Dame.

For the record, Notre Dame itself did a little "polishing" of its own name a number of years back. We graduates from back in the day recall it used to be the "Fightin' Irish," not the more sedate "Fighting Irish."

The quasi-slang word "fightin'" was meant to convey a kind of street-brawling, somewhat-uneducated commoner. "Fighting" is a little more refined. "Domers," as Notre Dame students and alumni are called, can now associate with the more refined, having dialed back on the lower-class moniker of "Fightin'" by adding the "g" to the end of it. But that's just a little history to show that even Notre Dame, when convenient, will add to its own history in order to subtract from its own lore.

However, when the zombies came after the name and the leprechaun (the Notre Dame mascot) a couple of weeks ago, Notre Dame fired back, telling the zombies to, as the Irish say, kiss off.

The reasoning was sound because, unlike major league sports teams like the Atlanta Braves, which, as a team, doesn't have anything to do with native Americans, Notre Dame became a haven for Irish immigrants to escape the extremes of a very anti-Catholic climate.

He is celebrated at Notre Dame as some giant figure of accomplishment, but he was a traitor to the Faith, plain and simple.

Actually, Notre Dame was founded in 1842 by the French order of C.S.C. — Holy Cross — and originally established as a school for mostly native American children and orphans of the Potawatomi tribe who had been orphaned by attacks from other Native American tribes (so much for the "peaceful Indians overrun by the mean White colonials" narrative).

But as the waves of Catholic immigrants picked up steam over the next 50 years, Notre Dame became an outpost for young Catholic men banding together for a Catholic education who wanted to make something of themselves in their new country. Since many of the Irish already spoke some level of English, it was easier for them to advance, and large numbers of Irish immigrants and their sons began flocking to Notre Dame, transforming the French-run former school for Indian orphans into a pre-college, a college and, eventually, a university.

Along the way, the Irish student body discovered a little pastime called football and would go on to become the unsurpassed champions of the gridiron. But that "ethnic thing" really stuck. The severe anti-Catholicism of the early 20th century was dominant, and it was constantly thrown in the face of the Notre Dame football team. In fact, Notre Dame became the country's national team precisely because of anti-Catholicism.

When legendary coach Knute Rockne applied for entry into the Western Athletic Conference (which is now the Big Ten and which actually has 12 teams), the application was rejected specifically because of odium fidei, hatred of the Faith. The big kid on the block in the WAC was the University of Michigan, whose head coach, Fielding Yost, hated Catholics. He told the rest of the conference that if Notre Dame gained admission, he would take his Michigan football team and go home.

And in a classic case of "lemons to lemonade," when Rockne and Notre Dame were shunned because of the Faith, Rockne simply took the team on the road, playing in the largest cities in the country and developing an intense national following as Catholics in all these major cities took pride in playing and whipping the rear ends of the anti-Catholic Protestant schools of the day.

It was in that climate that the nickname "Fightin' Irish" was born. It was originally an insult levied by sportswriters and Protestant fans who, after having been handed one defeat after another, derided the Irish Catholics with catcalls from the stands, such as "all you Irish can do is drink and fight."

So the name "Fightin' Irish" was originally a slur, however, in true Irish form, Notre Dame's 1924 yearbook embraced it saying, "'Fightin' Irish': a moniker originally given in derision; but so truly has it come to represent us that we are now unwilling to part with it, and we are, therefore, the Fightin' Irish of Notre Dame."

It was that history that Notre Dame recently threw back in the face of the woke zombies, who quickly retreated and just dropped the subject altogether, even taking down the website where the school name had been listed in the top five of the most offensive sports teams in the country.

The absolute dominance of Notre Dame in football brought the university a prestige, a certain cache, that, in the hands of the right man, could have produced the most Catholic university in the country. But another man, a truly malevolent and deceptive man, took over Notre Dame in the late 1950s and transformed the school into a vehicle for the widest possible destruction of the Faith imaginable.

The man was Fr. Theodore Hesburgh, a Holy Cross priest who was president of Notre Dame from 1952 to 1987. During his tenure, he used Notre Dame to totally remake Catholic education and even tried to change Church teaching. He is celebrated at Notre Dame as some giant figure of accomplishment, but he was a traitor to the Faith, plain and simple.

In the 1960s, for example, he worked behind the scenes with Planned Parenthood in a series of conferences paid for by the Rockefeller Foundation to produce a document for dissident theologians to sign and present to Rome to try to change the teaching on birth control. For his efforts to undermine the Church, he was given the chairmanship of the Rockefeller Foundation.

Additionally, Hesburgh worked with another Theodore, not well-known at all at the time, also to undermine the Church. On the signature page of the statement that came to be known as the Land O' Lakes statement, you can see his name proudly displayed: Theodore McCarrick, president of the Catholic University of Puerto Rico.

The communist-trained homopredator had already insinuated himself into the foundations of the destruction of the Church way back then. Various accounts, in fact, suggest that McCarrick was one of the driving forces, if not the driving force, behind the actual words of the statement, having been the major ghostwriter author of it.

Theodore McCarrick and Theodore Hesburgh wiped out Catholic higher-level education in America, which eventually worked its way down to grade-school level all across the Church in the United States. By the time McCarrick was planting the dynamite at Notre Dame to destroy the Faith in Catholic classrooms, he was already a prolific homosexual rapist, attacking numerous boys and young men on his way to becoming the most notorious homosexual rapist the Church has known.

But this was just one of Hesburgh's "accomplishments," bringing aboard a rapist to help chart the course of Catholic higher education. Everywhere the man went, he sought to undo the spiritual success of Notre Dame and substitute it with worldly success, exchanging spiritual goods for earthly evils disguised as goods.

He brought aboard Fr. Richard McBrien, a lying cheat of a priest who did all in his power for 30 years on campus to corrupt the minds of the young students sitting before him semester after semester, even becoming chairman of the theology department for a dozen years. He came to campus supporting birth control and women's ordination, so he was the perfect star in the dark constellation that Hesburgh was creating at Notre Dame.

What did not get printed in the glowing press releases from Notre Dame's propaganda department was that McBrien was secretly living with a woman who would regularly accompany him to all the clerical events at Notre Dame, the worst kept secret among Notre Dame's priests. He and the woman lived together for so long that the state of Indiana treated their cohabitation as a civil marriage, it having surpassed the necessary number of years at the same address to be considered legal.

Hesburgh hired and defended and promoted a vow-breaking, fornicating priest and set him loose on 30 years of students to instruct them in theology. His "theology" was so bad that even the wildly liberal U.S. bishops' conference had to condemn it.

Over the many years of Hesburgh's rule over Notre Dame, he stopped at nothing to convert the students sent there into radical anti-Catholics. Even the race-baiting author of the 1619 Project, Nikole Hannah-Jones, is a 1998 graduate of Hesburgh's influence. He brought the traitorous Catholic New York governor Mario Cuomo to campus in 1984 during the Reagan-Mondale campaign to attack Catholic teaching on abortion.

It was at Notre Dame in 1984 where the line "personally opposed but ... " first fell from the lips of U.S. Catholic politicians, all under the watchful and supportive eyes of Hesburgh. That would have come as no surprise, however, if you had been a student at Notre Dame prior to the campaign of 1980. During the Reagan-Carter race of that year, I was a sophomore, and on one fall day, Hesburgh went around to every single large class and promoted the line "abortion isn't the only issue."

I was a sophomore in chemistry class when Hesburgh came in and politely asked the professor for a few moments to address the students, which, of course, the professor agreed to. Hesburgh went on to tell the few hundred of us sitting there that we needed to weigh all the life issues and that abortion was no different from poverty, subtly placing in students' minds the scandal of Cdl. Joseph Bernardin's so-called consistent ethic of life, which came to be known as the "seamless garment theory." Hesburgh actually had Bernardin be the commencement speaker at my class graduation in 1983.

Looking over the totality of Hesburgh's anti-Catholicism disguised as elitist Catholicism, quite the picture comes into focus.

Looking over the totality of Hesburgh's anti-Catholicism disguised as elitist Catholicism, quite the picture comes into focus. He cooperated with Planned Parenthood and the Rockefeller Foundation, used his influence as president of Notre Dame to get Pope Paul VI to change Church teaching on birth control, conspired with the likes of Theodore McCarrick, Richard McBrien and Joseph Bernardin to corrupt the minds of students for almost 40 years and laid the course for how Catholic education could be completely corrupted.

But at least the university got the "Fighting Irish" part right. And I'm pretty sure it didn't have anything to do with the marketing department that recently signed the most lucrative sports marketing deal in all of college sports. No, Notre Dame would never stoop to that level.

Corrupt young minds? Cooperate with fornicating and homosexual rapist clergy? Advance political agendas resulting in the deaths of 65 million children? Well, okay, but come on, man, don't mess with the leprechaun. That's a bridge too far and too woke, even for us. 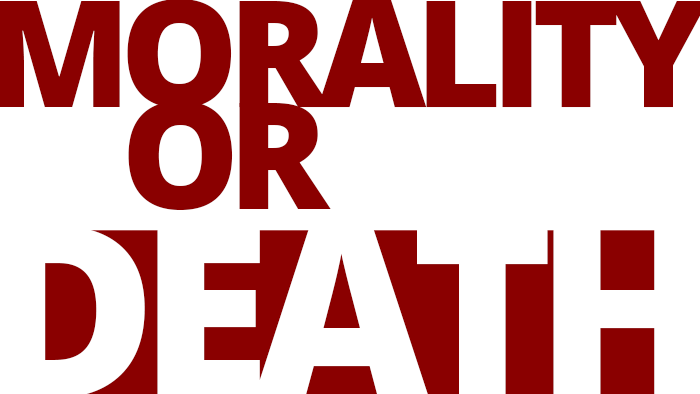 Morality or Death
There is no other choice.